The Southern Premier Meet: An Alternate Reality of Club Swimming 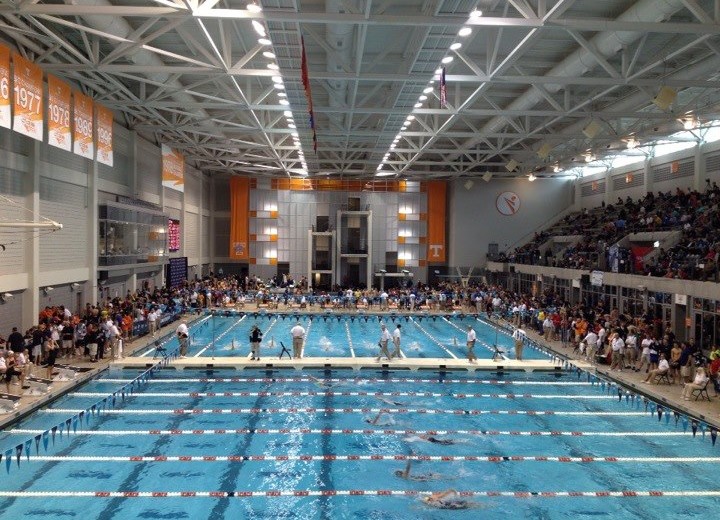 The Tennessee Aquatics Center will be host to a 10-team club meet that organizers hope will help increase excitement and engagement. Archive photo via Tyler Fenwick

Those who have been reading SwimSwam long enough know that we’re pretty disenchanted with the way that most swim meets are run, with their format, with the season formats, etc.

While we surely don’t have all the answers, we do have a lot of ideas, and one idea that we really like is the upcoming Southern Premier Meet that is being hosted by Tennessee Aquatics in Knoxville this weekend.

This meet will feature some really big-players in the club swimming scene:

According to meet host Marshall Goldman, the head coach of Tennessee Aquatics, the goal is to capture the atmosphere of a college or high school meet, but do it in a club setting.

“We Recognized that with the growing number of swimmers in the sport and with LSC championships, sectionals and other meets that are bursting at the seems and sessions are running longer and longer in the morning, there had to be a better way to do things,” Goldman says. “But also with so many teams it’s hard to truly find that excitement that a high school state or college meet finds, so we are trying to create that environment.”

Goldman has hit one of the biggest nails on its head. Prelims at big club swim meets are the worst part of swimming. They are long, they are exhaustive, they are a “swimming mill” of pumping swimmers through as quickly as possible.

We setup a meet that follows a college the college format, and in the ten teams invited we have four USA Swimming Excellence Program ‘gold medal teams’, two ‘silver medal teams’ and two ‘bronze medal teams’. Our intent is to in the future have age group as well as senior to create a team feel.”

John Morse, the head coach of the Nashville Aquatic Club, says that “the idea for this meet was to get together a group of teams that crossed L.S.C. and sectional lines to create a championship meet that is highly competitive, and still athlete friendly. The meet   will be only three days long, the warm up will be less crowded than usual, and the sessions will be short. This years meet looks to be very fast and deep for the senior athletes. We will need to work on improving the younger age groups for next year.”

The meet has about 500 swimmers entered, which keeps morning heats at roughly 130 swimmers or less per event (and in most cases, much, much less than that). Compare that to the College Station Sectional meet last weekend, where some events have over 200 swimmers entered, from dozens of different teams.

This format might not work for every team. It is probably most ideally-suited for large teams, but as more-and-more teams merge, there will be more-and-more large teams for whom this meet could be a good alternative to some of the other championship meets.

“As a sport, we need to look at some changes to keep some of our best swimmers intrigued, and it’s hard to get the kids emotionally as excited about the meets as you see at these high school and college meets, so it will be an interesting experiment.”

Another bonus- with a shorter prelims, you can add a heat of finals, and combined with the smaller size of the meet overall, a higher likelihood your swimmers make it back and get second swims… which is good experience for them.

what i see as the problem with the essz sectional meet is not that the meet is too large, but rather the essz itself is too large. the geographic area includes west virginia, north carolina, south carolina, georgia, parts of florida, tennessee, alabama, kentucky, mississippi, louisiana. as such, the essz meet suffers. regarding the premier meet being hosted, 8 of the invited teams are from the essz and come from ga, fl, tn and ky. the premier meet, with 500 swimmers as reported, is larger than the 2013 spring essz meet. the essz has not had a problem of sessions too long since the meet is less attended virtually every year. in the summer, the meet is even smaller. so… Read more »

This meet sounds like an interesting alternative. From a ESSZ perspective, it get really old having to travel to NC just about every year for this meet. Why can’t we alternate which state gets the meet (some places may not have facilities that are able to handle a meet of this size, I realize)? Lots of families are tired of going to the expense each year to attend a meet that is 4-8 hrs away, and the NC folks, at least some of them, don’t want to go out of state. This was witnessed when many in the NC LSC wouldn’t travel to TN for the meet and boycotted. How about bringing it down further south next year USAS?