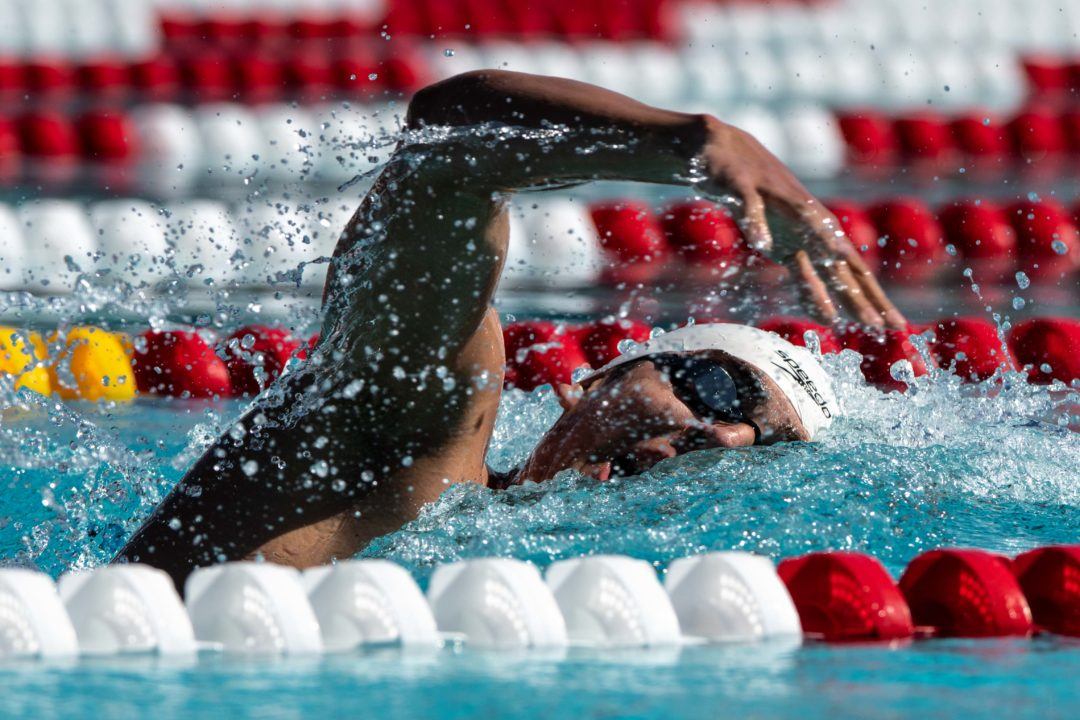 The University of South Carolina welcomed Missouri to Columbia on Saturday and both the men’s and women’s meets went down to the wire. The South Carolina men emerged victorious with a 6 point win, while the Mizzou women emerged with a 4 point victory over the Gamecocks.

In his first season as the South Carolina head coach, Jeff Poppell’s squad notched a signature dual meet win over the weekend as the Gamecock men upset the visiting Tigers by just 6 points.

His classmate Rafael Davila also swept both the distance races. In the 1000, Davila led a South Carolina 1-2-3 finish with a season best 9:03.17, touching 11 seconds ahead of teammate Tomas Novoszath. The two later returned to lead another 1-2-3 Gamecock finish in the 500, with Davila touching first in 4:23.89 and Novoszath finishing in second in 4:26.37. The Venezualan’s season best in the 500 stands at 4:21.07 from the Tennessee Invite.

Missouri was led by senior Jack Dahlgren, who swept both backstroke races. The Victoria, Minnesota native started his day with a narrow victory in the 100 back touching in 46.48, just ahead of South Carolina’s Michael Laitarovsky. Dahlgren later returned to win in dominant fashion in the 200 back, touching first in 1:42.64 to win by nearly three seconds. The several time All American holds season bests of 46.47 in the 100 back and 1:40.96 in the 200 back.

The Mizzou Tigers were led by fifth year senior Sarah Thompson, who won both of her individual events. The All American from Collierville, Tennessee, started her day with a dominant win in the 100 back, posting a swift 52.45 to win by three quarters of a second. Thompson then returned to win the 100 fly as well, putting up a 52.33 to win by a second and a half. Thompson, who finished 3rd at last year’s NCAA Championships in the 50 free, holds season bests of 51.59 in the 100 back and 51.44 in the 100 fly.

Tiger senior Megan Keil also won both of her individual events on Saturday, sweeping the sprint freestyles. The Derby, Kentucky native started her day with a dominant win in the 50 free, posting a 22.35 to win by 7 tenths. She later returned to win the 100 free as well, touching in 49.61, just .05 ahead of South Carolina’s Janie Smith.

Leading the way for the Gamecocks was sophomore Bella Pantano, who broke the South Carolina school record in the 100 back with her third place finish in 53.33. She later returned to win the 200 back in 1:55.59, using a quick front half to take the win over teammate Mari Kraus.

Midseason diving transfer Brooke Schultz also made an immediate impact for the Gamecocks, sweeping both the 1 and 3 meter events. In the 1 meter, Schultz posted a score of 310.05 to win by nearly 30 points, and then returned to score 378.15 points in the three meter to taker the win. Schultz. Schultz was a several-time All American, including a 2018 NCAA title in the 3 meter, while diving for her hometown Arkansas Razorbacks, though transferred to South Carolina as a graduate student for the spring.

South Carolina will send a squad to the Virginia Tech Invite this weekend, while Missouri will send a group to the Ohio State Invite February 11th-13th, before both programs head to the SEC Championships on February 15th in Knoxville, Tennessee.

23.36 breast split from South Carolina is definitely something I didn’t expect to see