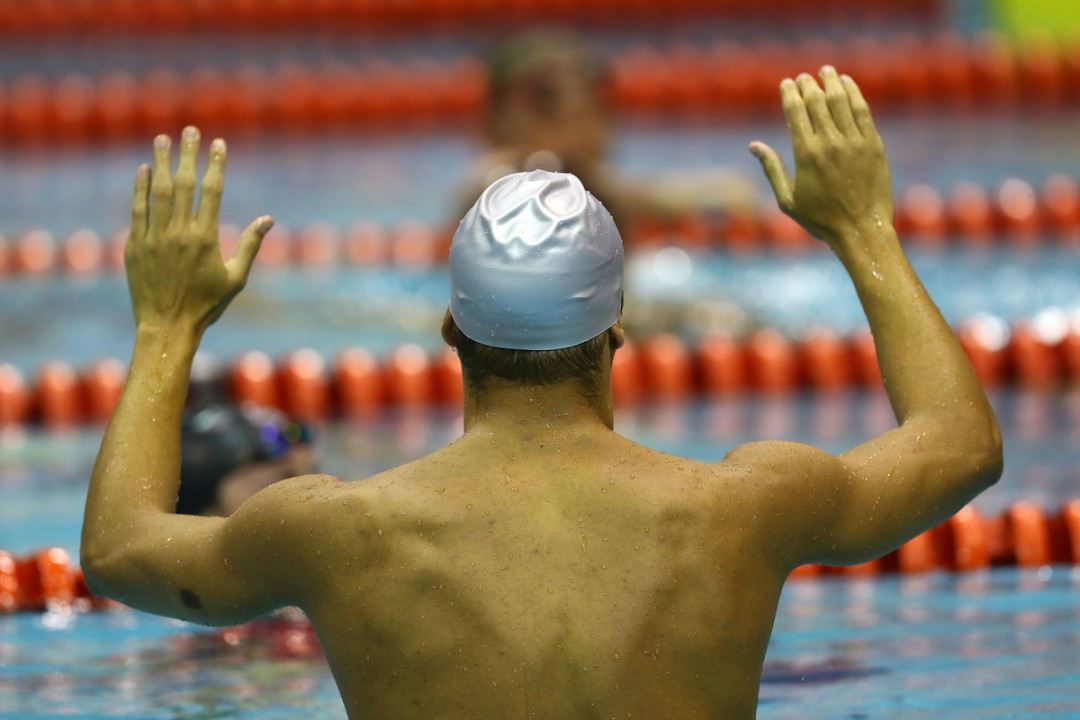 Chad le Clos qualified for the Olympics in the 100 fly this morning at South African National Championships in Durban, while Brad Tandy scored a cut in the 50 free.

Jarred Crous became the 7th man to qualify for the South African Olympic swimming team after a 2:11.65 in the 200 breaststroke on Thursday in Durban.

Special thanks to Wayne Riddin for contributing to this report.

The final day of the 2016 South African Championships and Olympic Trials was loaded-up. In addition to finishing-out the standard Olympic final-day events, South Africa loads the last day with all of the non-Olympic 50 meter events, swum after most competitors have completed the rest of their meets.

Nathania van Niekerk and Mariella Venter tried in vain to achieve that elusive 2:10,60 Olympic QT in the opening race of the evening. They raced stroke-for-stroke stroke throughout turning in 1:03,91 and 1:04,09, respectively and then finished in that order just 0,66sec apart with Van Niekerk taking gold in 2:11,33.

Chad le Clos raised the stakes again as the crowd favourite in the 100m butterfly with another magnificent 51,82, a tenth better than his semi-final swim.

Tara Nicholas made up slightly for a disappointing week with a victory in the women’s 50m breaststroke, finishing in 31,82 ahead of Taryn Mackenzie on 32,15 and Tatjana Schoenmaker in 32,25.

Featuring Olympic gold medalist Cameron van der Burgh, 2013 World Championships bronze medallist Giulio Zorzi and recently qualified 200 specialist Jarred Crous, the race was set up to be special, even if it wasn’t for an Olympic spot.

As usual, Van der Burgh was full of praise for the spectators. “Thank you so much to the crowd for coming out to support us this week. It has been great. Technically I have had a good week with a lot of positives so I am enthusiastic in the build-up to Rio. Obviously there is still a lot of work to do but I must just have faith in my programme and hope that everything continues in that direction.”

American-based Brad Tandy was in his element as he secured his place on the Rio team with another 22,13 50m freestyle dash – dipping under the requisite 22,27  and equaling the time he achieved in his heat yesterday.

As Tandy emerged to take over that sprinting mantle from veteran Roland Schoeman, he acknowledged the role Schoeman has played in his development.

“Racing next to Roland was a privilege and I hoped I could pull him along. I enjoyed going to the Commonwealth Games with Roland in my first South African appearance and it will be sad to not have him in Rio.”

Douglas Erasmus and Schoeman were not able to match the early speed from Tandy as they raced it out to a 22,55 and 22,75 for the remaining medals.

Tayla Lovemore followed Tandy’s effort with a performance of her own in the women’s dash. She won in a personal best 25,97 as she took her first gold medal of the meet ahead of a strong challenge from Jessica Ashley-Cooper, who clocked 26,10. Both were outside of the Olympic qualifying time, as has been the story of the women’s meet for the entirety of the week in Durban.

The non-Olympic events acted as fillers of a fast and exciting evening with Brett Walsh winning the close race in 24,21 with Reynard Wessels next on 24,31 and Nico Meyer third in 24,40. There was no overlap from the men’s 100 fly final earlier in the night.

Michelle Weber timed her surge right to come through on the final length to win in 8:57,68, ahead of early leader Jessica Whelan (8:58,68). A late charge from Kristin Bellingan nearly was good enough to catch Whelan too, but she was ultimate third in 8:59,03.

It was another exciting time trial evening to keep the crowd on a high as Myles Brown raced out in an incredible 1:47,53, which counts toward the Olympic Qualifying Time individually, to lead off the 4 x 200m freestyle relay team.

Sebastien Rousseau kept the target in sight with a 1:48,09 to hand over to a tiring Calvyn Justus, who was the anchor on last night’s medley relay time trial.

Right now, that puts them in second position among four available wild cards that will earn invites to the Olympics in the event. Brazil leads that hunt in 7:10.20, and the South Africans are chased by Italy (7:13.77), China (7:16.67), and Canada (7:17.33). Italy’s trials are still to come, and if they’re planning on entering this relay, they may swim a time trial to improve their stead as well.

Ricky Ellis managed to out-touch the favoured Christopher Reid and Jacques van Wyk in the 50m backstroke. Ellis had a great start to take the race to Reid and Van Wyk, touching in 25,83 and the silver medal eventually shared on 25,97.

The roof nearly lifted as young Matthew Meyer (18) hit a cluth Olympic Qualifying Time in the last individual race of the 2016 Championships. He split an amazing final 100m to clock 15:09,58, well under the standard of 15:14.77.

He was smiling all the way as “his dream came a bit earlier than expected but so happy to have achieved this.”

My aim will be to see if I can make a final in Rio,” said the determined Meyer.

Everyone held their breath as Brent Szurdoki trailed Meyer all the way and ended on a 15:15.40, which just missed earning him a spot next to Meyer in Rio.

In an attempt to get the South African men’s 4 x 100m freestyle relay team qualified for Rio, the four swimmers would need to post at least a 3:17.40 to knock Argentina off the fourth wildcard spot. That averages out to around a 49.41 per swimmer. Douglas Erasmus bounced back from a disappointing individual 100 free final and started things off on-track with a 49,83 opening split, handing off to an outstanding leg of 48,76 from Clayton Jimmie. He handed over to Ryan Coetzee who clocked 49,85 before Caydon Muller ended it off with a 49,20 for a 4:17,64. Thus far, unless someone scratches the relay, that time won’t be enough to earn an invite to Rio in this relay.

Could possible go even faster at Europeans if they use the right 4 guys in that relay.

You could also do a quick summary on their Nationals. There were some pretty fast times, as usual.

I don’t think Le Clos is even tapered.

Definitely not tapered. If he swims the individual event at the Olympics, he will be 1:45+. As good as that is, there is not that much point in doing it as it will only get you an outside lane in the final. He is better off sticking to the 2 Fly events which are the “big box office hits” of the first week in Rio.