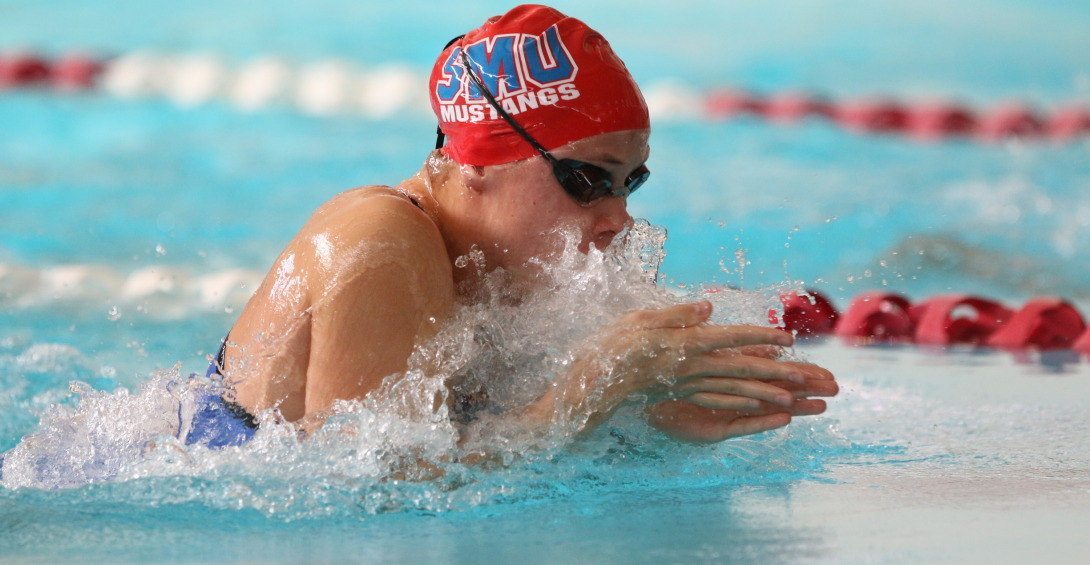 The SMU swimming and diving programs head to the American Athletic Conference Championships Feb. 15-18 at the CRWC Natatorium on... Current photo via SMU Athletics

Pitt Arrives In Atlanta Ahead Of ACC Championships

Pitt swimming & diving has arrived in Atlanta ahead of this week’s ACC Championships for diving and women’s swimming, beginning…

The SMU swimming and diving programs head to the American Athletic Conference Championships Feb. 15-18 at the CRWC Natatorium on the campus of the University of Houston. Action begins Wednesday at 11 a.m. CT with finals starting at 5 p.m., and continues each day with 10 a.m. prelims, 12:30 p.m. diving and 6 p.m. finals. Check out The American’s Championship Central page at TheAmerican.org/swim for a full schedule and all your event information.

ALL-AMERICAN ACADEMICS: The SMU men’s and women’s swimming and diving programs earned the first of two possible College Swimming Coaches Association of America (CSCAA) team awards this season. To be selected as a CSCAA Scholar All-America Team, programs must have achieved a grade point average of 3.00 or higher over the fall semester.

The women’s program posted a team GPA of 3.53 during the fall semester to position itself 24th of 165 teams to garner the honor, while the men’s team registered a 3.29 GPA placing them in the 18th spot of 86 teams listed. Both programs were above the Division I national average of 3.336 for women and 3.22 for men. Mustang seniors have been honored each semester on the Hilltop thus far.

AMERICAN HONORS: Vicky Cunningham leads the Mustang women with a pair of American Athletic Conference Swimmer of the Week honors this season (Dec. 6 & Nov. 1). Matea Samardzic was also honored on Oct. 18. It was the first career honor for each. On the diving side, Lauren Lamb was recognized on Nov. 1.

Bryce Klein has won Diver of the Week honors four times this season (Jan. 17, Nov. 22, Nov. 8, Oct. 25). His most recent award came on the heels of the Mustangs’ dual meet win over Incarnate Word where Klein won both the 1- and 3-meter events. Jonathan Gomez won the award twice on the swimming side (Jan. 31 & Oct. 25) after standout performances against TCU and Texas A&M.

MAKING THE CUT: On the women’s side SMU has posted 11 NCAA provisional times so far this season for the 2017 NCAA Swimming and Diving Championships March 15-18 in Indianapolis. Matea Samardzic has four cuts for the Championships, her first career marks since transferring from NCAA Division II St. Peter’s. Samardzic’s times come in the 200- and 400-yard individual medleys and 100- and 200-yard backstrokes. She leads the conference in all four. In freestyle events, Vicky Cunningham leads the Mustangs with times in the 100 and 200 distances. Tara-Lynn Nicholas has standards in both breaststroke distances, while Marne Erasmus (100), Erin Trahan (100) and Anna Cheesbrough (200) pace the Mustangs in butterfly events. In diving action, Brooke Pospichal has also qualified for the NCAA Zone Championships March 6-8.

Bryce Klein will make his third appearance at NCAA Zones, after posting qualifying scores on both the 1- and 3-meter springboards at the Mustangs’ first event this season. Jonathan Gomez has also posted provisional standards in the 200-yard butterfly (1:43.36 (c)) and 400-yard individual medley (3:50.84 (c)) and looks to improve on those times for the NCAA Division I Swimming and Diving Championships held March 22-25.

NATIONAL NOTABLES: Marne Erasmus and Matea Samardzic rank in the top 20 nationally of their respective events. Erasmus is currently 19th in the 100-yard butterfly (52.23), while Samardzic sits 20th in the 200-yard backstroke (1:53.54). Erasmus is a three-time All-American and school record holder in the event, while this is Samardzic’s first NCAA Division I B cut in the 200 back after transferring from St. Peter’s.

TOP TIMES: Heading into the 2017 American Athletic Conference Championships, the Mustangs lead the conference in 11 total events and 2 relays (women’s 200- and 400-yard medley relays). In all, 28 women and 23 men have times that would place them in their respective Championship Final (top 8) at the event.

DUAL WINNERS: The Mustang men and women went a combined 7-2 in dual action during the 2016-17 season with each team only falling to Texas A&M, both ranked opponents. The women defeated American Athletic Conference opponents Houston and Tulane, as well as Rice and North Texas, while the men picked up wins against AAC foe Connecticut, rival TCU and Incarnate Word.

THE NEW HOME OF SMU SWIMMING & DIVING: Building on a legacy of proud Olympians, world records and 155 national titles, SMU broke ground on the new Robson & Lindley Aquatics Center and Barr-McMillion Natatorium on Friday, Feb. 26, 2016.  The 42,000 square foot center will be home to SMU’s internationally-recognized men’s and women’s swimming and diving teams. Located at 5550 SMU Blvd. on the University’s growing east campus, the center will provide facilities for practice, competition and community use. The Aquatics Center will feature an Olympic-sized, eight-lane indoor pool with a platform diving area, including four springboards and a 10-meter tower for training and competition. Coaches’ offices, men’s, women’s and visitor locker rooms and a classroom and meeting area will be located adjacent to the pool. Spectator seating for 800 will be on the mezzanine level. The facility is set to open for the 2017-18 season and will serve as host to the 2018 American Athletic Conference Championships.

2016 NCAA CHAMPIONSHIP: Three student-athletes represented SMU at the 2016 NCAA Diving I Swimming and Diving Championships including Marne Erasmus and Tara-Lynn Nicholas on the women’s side, and Bryce Klein on the men’s side. Erasmus earned All-America honors placing 11th in the 100-yard butterfly, while Nicholas was 21st in the 100-yard breaststroke. Klein placed 17th overall on 3 meter, after tying for the final Consolation Final qualifying spot.

2016 CONFERENCE RECAP – WOMEN: SMU won 10 of 18 swimming events to defend its AAC Championship. The win was the Mustangs’ second in the three-year history of The American, and 17th in the last 20 seasons. In all, the Mustangs earned five individual championships, and swept the event’s five relays. Marne Erasmus (butterfly) and Kirsty McLauchlan (individual medley) swept their individual specialties, while Tara-Lynn Nicholas won the 100-yard breaststroke.

2016 CONFERENCE RECAP – MEN: Senior Sam Straughan was named the Most Outstanding Swimmer of the Meet and Bryce Klein was honored as the Most Outstanding Diver, as the SMU men’s swimming and diving program went on to earn runner-up honors at the American Athletic Conference Championship. The Mustangs won 13 of 21 events en route to the second-place finish.

CHAMPIONSHIP SUCCESS: The SMU women have won 17 of the last 20 conference championships, including a first-place finish at the American Athletic Conference Championship in 2016. The Mustangs have never finished outside of the top three under Steve Collins, with only two 3rd-place finishes. 2016 was the 32nd consecutive year the Mustangs appeared at the NCAA Championship, dating back to 1985. Of those 32 appearances, SMU has finished in the top 10 on 17 occasions, and inside the top 5 a total of 10 times. The highest placement came at the 1996 Championship, where the Mustangs earned runner-up honors.

On the men’s side, the Mustangs have won 41 conference championships since the 1946-47 season, with 16 coming under current head coach Eddie Sinnott. In all, the program has produced 633 individual champions at the conference level, and 30 at the NCAA level. The Mustangs have earned runner-up honors at each of the three American Athletic Conference Championships.