Skating By: How Did 2018 Last Chance Qualifiers Fare at NCAAs? 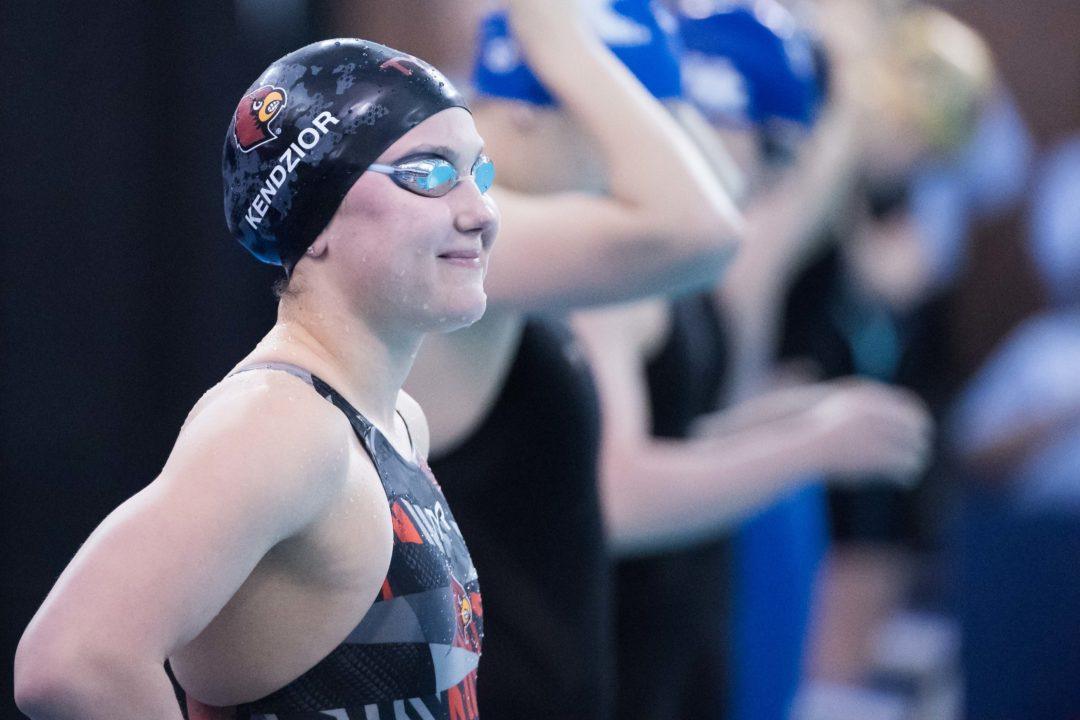 Louisville's Alina Kendzior was on the 100 back bubble with a 52.48 from ACCs, but dropped down to a 52.16 at the TN Last Chance Meet to secure her spot further. She went on to score at NCAAs with a sub-52 performance. Archive photo via Mike Lewis/Ola Vista Photography

Disclaimer: there is no one-stop-shop for Last Chance meet results. We combed through NCAA event rankings via the USA Swimming Database, limiting our search to last chance qualifying periods between the end of conference meets and the end of the NCAA championship qualifying period. If we missed any qualifiers, please let us know in the comments so we can add them in.

Last chance meets are pretty self-explanatory– they’re the last chance for a swimmer who hasn’t yet qualified for the NCAA Championships to do so. These meets are typically are tacked on at the end of conference championships, as NCAA hopefuls try to hang on to their taper and shoot for a time that is more likely to qualify for the NCAA Champs. Swimmers don’t have much to lose, as these meets are simply offering them another shot to make the meet if they don’t have a favorable spot in the event rankings for that season.

Looking at how last chance qualifiers did this year, swimmers added time at Nationals for the most part. Juggling a conference taper with an impromptu last-chance swim as well as another championship meet can be incredibly difficult, as it’s physically and emotionally taxing (especially for a longer race). However, sometimes a last chance qualifier can surprise. A few swimmers managed to hit season bests, and a select few found their way to individual scoring at Nationals.

Below, check out who qualified for NCAAs off of last-chance meets, and then see how they fared at NCAAs.

Editor’s Note: there’s no last chance depository, per se, so we’ve done our best to comb results for qualifiers out of last chance meets. If we’ve missed one, please let us know in the comments! Additionally, some swimmers may have already been fast enough to qualify for NCAAs, but were on the bubble, so they swam last chance swims anyways and bettered their chances.

*In the chart above, those with bolded names scored at NCAAs and/or improved upon their last chance swims.

14 men were able to qualify for NCAAs based on their last chance swims, with three men capitalizing on their opportunities to score individually.

Two of these men were Georgia swimmers: Walker Higgins and Gunnar Bentz. Higgins added a bit of time in prelims but was fast enough to squeeze into the 500 free B final, and though he added even more in finals, he still finished in 15th to secure 2 points. Bentz dropped a bit of time from his last chance swim to qualify into the 200 fly A final, and settled for 8th there.

UCSB’s Billy Mullis was the only other swimmer on the men’s side to improve upon his time at nationals, with a 1:40.97 in the 200 back.

*In the chart above, those with bolded names scored at NCAAs and/or improved upon their last chance swims.

Two Louisville women were able to improve and/or score at NCAAs after their last chance qualifications. Alina Kendzior hit a lifetime best 51.76 in the 100 back prelims, and she went on to finish 15th in finals, while Morgan Friesen swam a PR of 2:09.22 in the 200 breast after regressing in the 100 breast the day before.

Auburn’s Breanna Roman and Georgia’s Megan Kingsley also scored, with Roman improving upon her last chance swim in the 100 breast and Kingsley adding a bit but still going fast enough to make the 100 fly B final.

Trolls B Trolls, hope you reach the – # you are looking for, keep training for it!