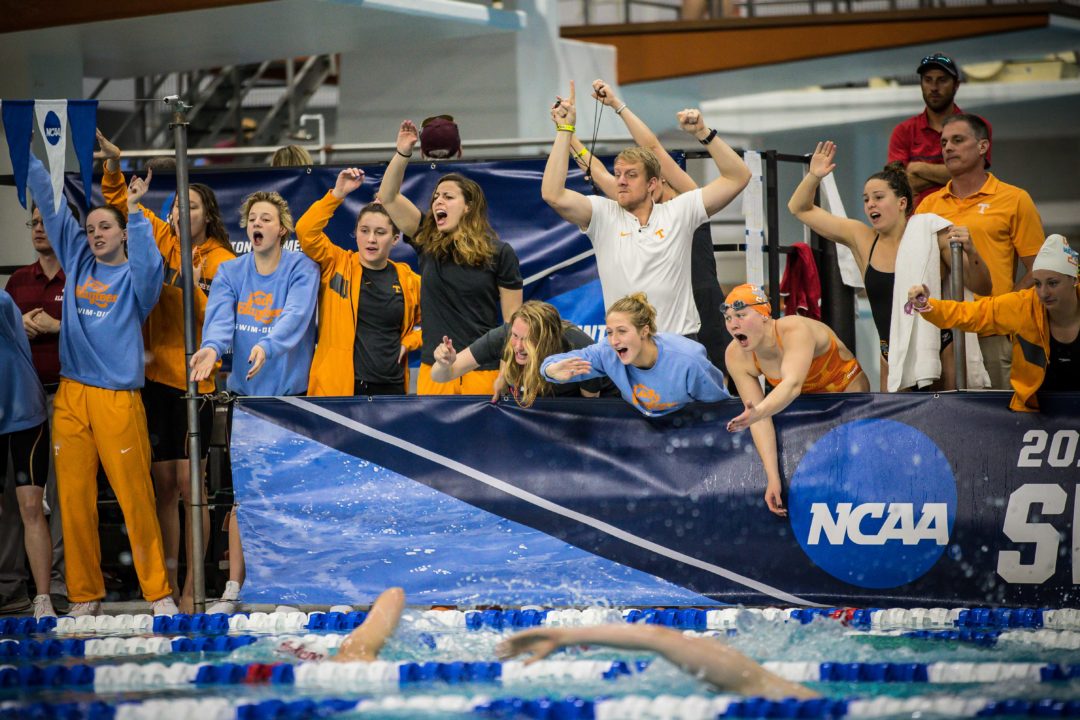 Six members of the University of Tennessee team will make use of their extra year of eligibility, returning for a fifth year of competition in 2021-2022. Current photo via Jack Spitser/Spitser Photography

Six senior swimmers at the University of Tennessee have elected to take advantage of an NCAA waiver to return for a unique 5th season of competition. Of the returners, five are on the women’s side, while just one is a man.

The six athletes will join a rapidly growing number of NCAA swimmers who will take advantage of the NCAA’s waiver that granted all winter sports athletes an additional year of eligibility if they competed during the 2020-2021 season. Scholarships for athletes competing in their extra year of eligibility do not count toward a team’s cap meaning that, if Tennessee allows it, the returning athletes can maintain their financial aid without taking away from other members of the team.

A post shared by Tennessee Swimming and Diving (@vol_swim)

Of the returning women, two of them scored points for Tennessee at the 2021 NCAA Championships.

Alexis Yager scored the third-most points for the Lady Volunteers, helping the team to a 10th place finish overall. Yager scored points in two different events, finishing 15th in the 200 IM and 14th in the 400 IM. At the 2021 SEC Championships, she finished third in both of those events.  Her first SEC medal came in 2020, when she won gold as a part of Tennessee’s 400 medley relay.

Yager has seen large improvements in her main events over her last few years at Tennessee. Prior to the 2021 season, her best time in the 200 IM stood at 1:56.85, which she took over a second off of at the 2021 SEC Championships, touching in 1:55.67. That time would have been fast enough to qualify for the A-final at the NCAA Championships, while her 1:56.73 was only good enough to make the B-final.

The second returning scorer for the Lady Vols is Tjasa Pintar, who was the school’s top swimmer in the 100 and 200 freestyles last season. The Slovenian Olympian finished 15th in the 100 free at the NCAA Championships and missed qualifying for the 200 free B-final by just .03. Like Yager, her times from the SEC Championship meet were significantly faster. Her 100 free time would have qualified her for the A-final of the event, while her 200 time would have put her into finals as the 9th seed.

Joining the pair of NCAA scorers in returning for a 5th season will be Alex Gebel, Emily Sykes, and Megan Sichterman.

For Gebel, the 2021 SEC Championships were her first time making the conference team, and she capitalized on the opportunity with a pair of B-final swims in the breaststroke events. While her 100 breast was slightly slower than it had been in past years, she was over six seconds faster in the 200 breast than she was in 2020.

Another member of the school’s breaststroke group, Emily Sykes was a C-finalist in both breasts, as well as the 400 IM, at the 2021 SEC Championships. Along with Yager, Gebel, and rising senior Mona McSharry, Sykes will be a part of the breaststroke core that will only lose one member next year, Nikol Popov.

With five of this year’s seniors returning for a fifth year, a loaded incoming class of transfers that includes Cal’s Cassidy Bayer, Texas A&M’s Emma Carlton, and Auburn’s Anna-Julia Kutsch, and an incoming freshmen class that includes German Olympic Trials finalist Julia Mrozinski, the Tennessee women will have a deep, talented team next season.

The lone 5th year on the men’s side for the Vols next year will be Kayky Mota, who has only been with Tennessee since the spring of 2020 when he transferred from Miami (OH). He was one of just five men for Tennessee to score at the 2021 NCAA Championships, finishing 16th in the 100 fly. Mota currently sits as the second-fastest performer in school history in the 100 fly, as well as the third-fastest in both the 200 fly and 200 IM.

Don’t we say this every year?

Wow! Didn’t see this coming. Between these seniors staying, the incoming transfers and their stout freshmen class Tennessee is going to be very impressive