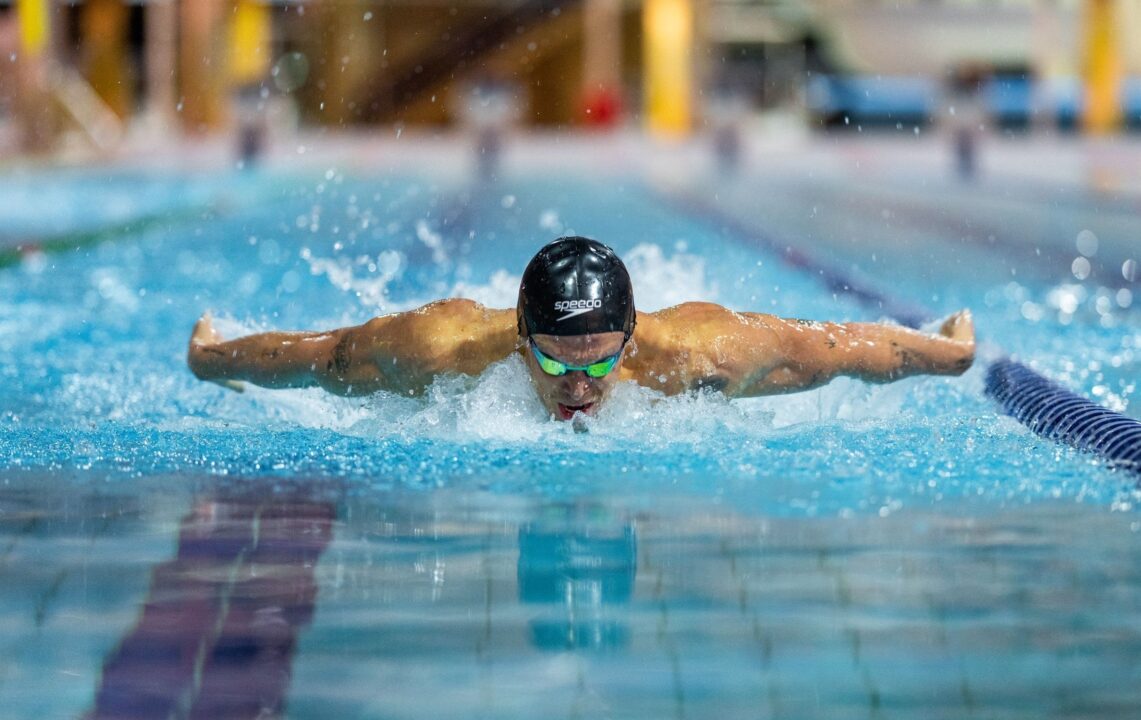 Cody Simpson cruised to the top of the podium in the men's 100m butterfly event while competing at the Queensland LC Preparation Meet. Archive photo via Speedo

In the timed final, Simpson of Griffith University punched a result of 53.37. That beat the competition by roughly one and a half seconds, comprised of an opening 50m of 24.95 and a back half of 28.42.

It was this 100m fly event that gave Simpson his slot on the 2022 Commonwealth Games roster this summer. There in Birmingham, Simpson made it to the final, ultimately clocking a time of 52.06 to place 5th.

His personal best in this 1fly event rests at the 51.79 produced at this year’s Australian Championships, a mark which would have also rendered him on the Australian World Championships team had Kyle Chalmers not decided to compete in Budapest after all.

This summer Simpson revealed he would be potentially broadening his horizons beyond trying to qualify in just his bread-and-butter 100m fly event for Paris 2024. Thus far, however, the 100m fly remains his best shot for individual qualification based on performances within his home nation.

Simpson ranks as Australia’s 3rd fastest 100m flyer from the aforementioned Aussie Championships. His PB of 51.79 was in the heats, whereas he hit 51.97 to wrangle up bronze in the final behind winner Matt Temple (51.50) and Chalmers (51.67). The next closest finisher was 4th place Bowen Gough who produced a time of 52.35.

It’s unclear if Chalmers will pursue individual qualification for Paris in the 100m fly or if any other lurking Aussie athlete may emerge between now and the 2024 Trials. However, fewer than 2 years out, Simpson’s PB is right within striking distance of the FINA Olympic ‘A’ cut of 51.67.

Additional winners on the day included Jenna Strauch doubling up on her 100m breast gold from day one with a win in the 200m distance. Strauch touched in 2:29.22 to get to the wall nearly 8 seconds ahead of the pack.

Jade Starr took the women’s 200m back in 2:18.70, leading a 1-2 Griffith punch in the 19 & over final. Her teammate Sarah Cooper placed second in 2:24.35 while 27-year-old breaststroke specialist Taylor McKeown touched in 2:29.92. However, a pair of swimmers from the younger heats actually beat both Cooper and McKeown’s times. Clav Tiumalu-Johnson clocked a 2:22.56 to dominate the 17-year-old heat while Eesha Verso won the 15-year-old heat in a time of 2:24.30 to round out the overall podium.

“I am very happily retired,” McKeown told SwimSwam. “I just didn’t want to retire without racing every event in the program. So I decided to enter that meet and do the 200 fly and 200 back to tick them off.

“Kaylee was meant to race me in the 200 back but she withdrew, so technically I won my last ever race against Kaylee… in a 200 back,” she laughed. “I did those races with very minimal training, so I absolutely died.”

Did Taylor have a change of heart about retirement like Serena Williams ??

Too early to be predicting Olympic teams at this stage, They will need to be swimming 50secs before any of them are likely finalists

We’re looking into that.

You guys should try to get a pod with him! I imagine it might be difficult but how cool would that be for the site

Shaun champion was 51.54 at p66 this summer, faster than Kyle or Cody. Also young Jesse Coleman has been dropping a lot of time. I could see neither Cody nor Kyle making any team in 100 fly. No saying it will happen but it could.

The article should probably say “had Simpson not finished 3rd at the Australian trials” rather than the point about Chalmers.