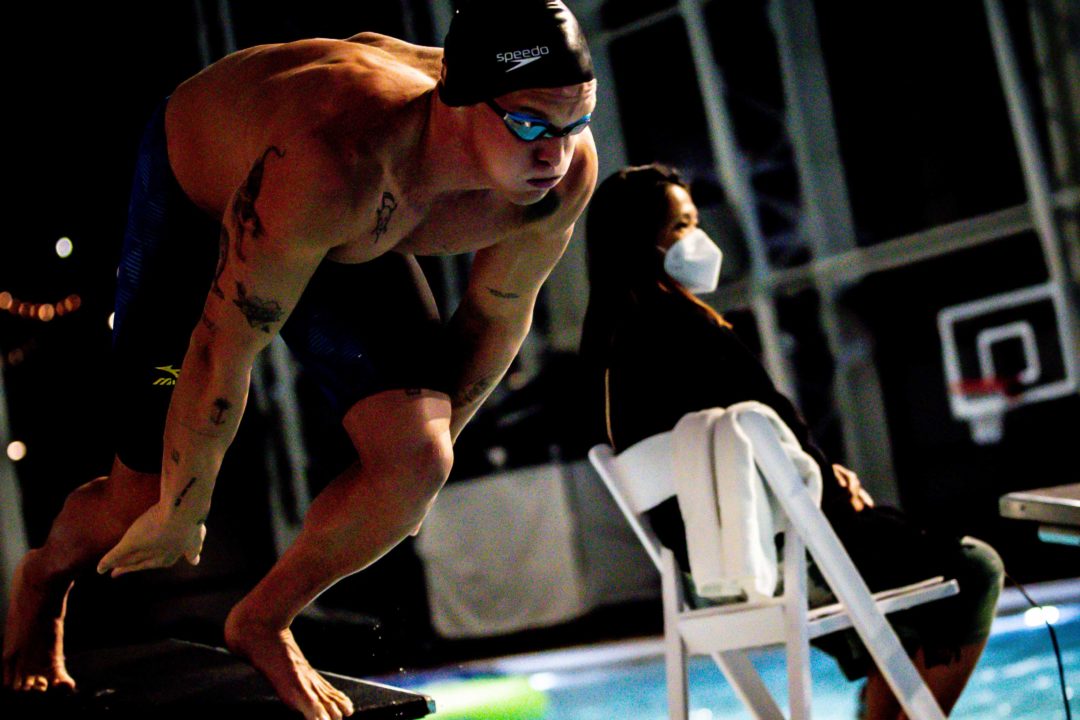 Day one of the Queensland Long Course Preparation Meet #2 was more about who wasn’t racing than who was.

Based on the entries, we had expected to see powerhouse athletes Kaylee McKeown, Brendon Smith, Lani Pallister and Mack Horton diving in; however, all wound up no-showing the racing at Brisbane Aquatic Center.

In their stead, Commonwealth Games athlete Cody Simpson and Olympians Jenna Strauch, Cameron McEvoy and Zac Incerti stepped up to the blocks.

For 25-year-old Simpson, the Griffith University star topped the men’s 100m freestyle podium. Simpson clocked a time of 50.70 to narrowly edge out Incerti who got to the wall .03 later in 50.73.

Simpson owns a personal best of 49.34 in this event, a time he logged at last year’s Australian Swimming Championships. As for Incerti, he’s been as fast as 48.51, a mark he put up at last year’s Trials.

Interestingly for Incerti, the Aussie had been training with Olympic champion Kyle Chalmers at Marion Swimming Club in South Australia. However, 26-year-old Incerti is now listed as a USC Spartan in Queensland. We’ve reached out to Incerti for his insight into the move.

Simpson also landed on the 50m free podium, snagging the bronze in a time of 22.96. Getting the gold was 21-year-old Thomas Nowakowski who touched in 22.55 while McEvoy settled for silver in 22.65.

Strauch earned gold in the 100m breast in a time of 1:08.18. That’s well off of her own lifetime best of 1:06.37 from last year’s Australian Trials, but it was enough to beat the field today by over 4 seconds.

Nothing is guaranteed in 100 fly.. even Matt Tenple hasn’t really improved since his 50.4 at trials last year

Zac swam and won the 400m in the morning session.

I have a feeling Chalmers won’t pursue the 100 fly in Paris. Even so, Temple and Champion are both well ahead of Cody. Best shot is probably top 6 in 100 free considering our boys aren’t very competitive atm.

Will be interesting to see what happens!

Not very competitive in the 100m (hard to disagree)…but somehow manage to get on the podium in the 4x100m free at every championship!

Hhmm… The opening IS there for the 100fly but he’s still probably 3rd cab on the rank. Temple has had an “off” 2022 but has to be favoured for one spot. On PBs, Champion is a couple of tenths ahead of him. By no means impossible to bridge that gap and more but I can’t help thinking he’s made his “massive steps” getting to his current level. Whilst he may get quicker, its more likely those future steps will be incremental rather than half seconds.

Not out of the question for him to make the 4X100 relay but again some question marks. He’s currently only a 49sec flat start and a 48high split and this is some way off really… Read more »