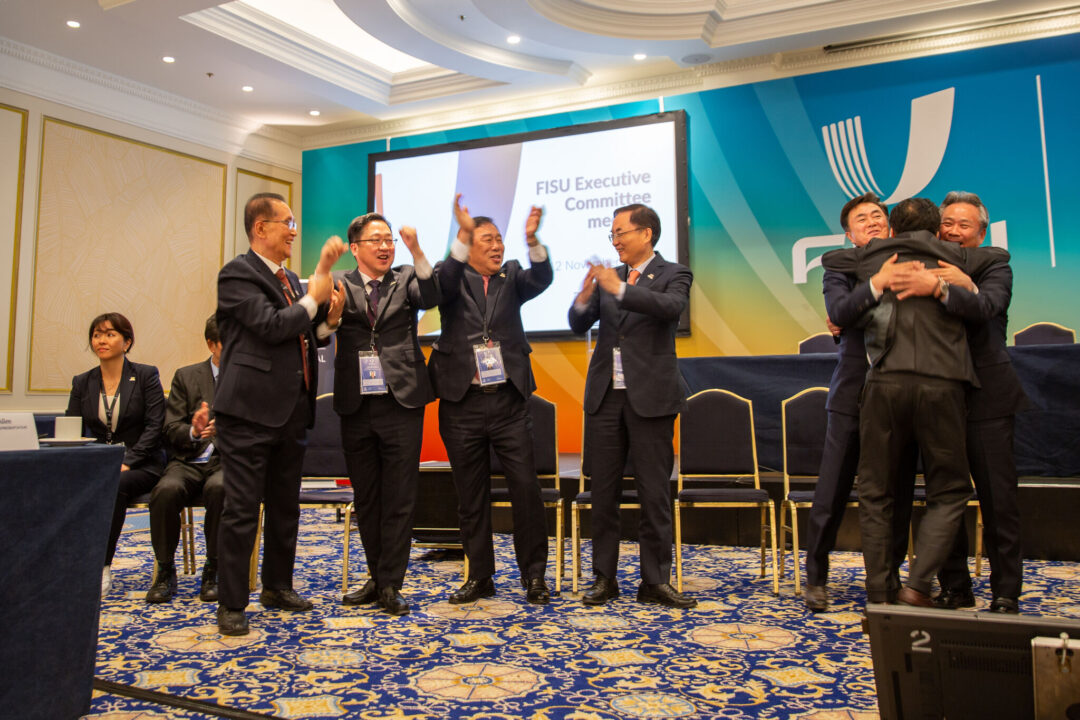 The Chungcheong Megacity in South Korea will host the 2027 World University Games after winning a vote of the FISU Executive Commitee on Saturday. Archive photo via FISU

In a vote of the excitement of new frontiers versus the confidence of experience, Chungcheong Megacity was chosen as the host of the 2027 World University Games on Saturday. The city beat out Greensboro, North Carolina in the United States with a 14-7 vote of the Executive Committee.

“FISU offers its sincere congratulations to Chungcheong. Korea has a proud tradition of university sport and will, I am sure, be an ideal place for the world’s best university athletes to come together in peaceful celebration in the summer of 2027,” said FISU Acting President Leonz Eder. “Chungcheong 2027 has the potential to be a very special FISU World University Games, making a lasting contribution to university sport.”

While the United States offers a massive potential new market for FISU, South Korea offered a sense of reliability: the country has successfully hosted the event before, FISU competition receives huge support there, and the promise of a 100% existing infrastructure plan. The latter has become bigger as political turmoil and building delays have caused challenges to bids for major sporting events around the world. The bidders from Chungcheong said that no major renovations or new construction would be hired to host the games.

North Carolina’s final pitch pointed out that the event could be part of an American crowned-jewel after the 2026 FIFA World Cup (hosted mostly in the US) and before the 2028 Los Angeles Olympic and Paralympic Games.

Eder suggested that North Carolina could host a future event, however.

“FISU would like to thank both candidates for their professionalism and for the sporting way in which they have conducted themselves throughout the process.”

The North Carolina bid estimated between $150 million and $350 million in revenue for the state.

The World University Games are, depending on the year, one of the three largest sporting events in the world by participants. The 12,885 participants in South Korea in 2015 is more than the Olympic Games (which are working to shrink participant counts) or Asian Games have ever drawn.

USA Swimming wasn’t scheduled to send a team to the Chengdu World University Games in 2022, and hasn’t said anything to update that plan for 2023. That is sort of a flag for the general lack of commitment to the event by the US. Asian nations, and Russia, generally lead the medals tables at the World University Games. In 2019, the US was 4th. In 2017, the US was 5th, behind Japan, Chinese Taipei, South Korea, and Russia. That is not a position the US normally finds itself in at international summer multi-sport events, but is directly tied to the fact that the US does not send their best university athletes to this event.

FISU has already begun the 2029 selection process – bid submissions were accepted until January 31, 2022.

I bet any US team members would be a lot more excited about travelling to South Korea than Greensboro
Tough luck for the South Korean kids, though…

Would have been nice for NC to get some recognition in international sports.