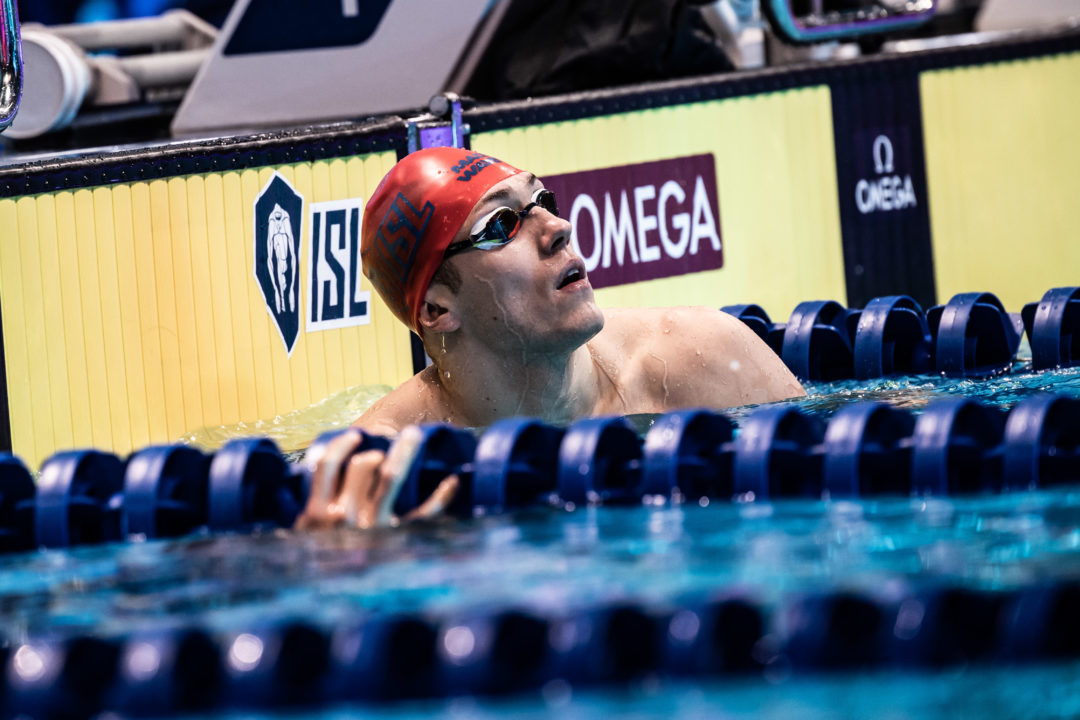 Ilya Shymanovich followed up his world record performance in the 100 breaststroke with the first sub-25 50 breast split of all-time in 24.92. Archive photo via Mike Lewis/Ola Vista Photography

The third and final day of the 2020 Belarusian Short Course Championships had no shortage of excitement, as several records went down – including a new world record from Ilya Shymanovich.

Shymanovich put up a time of 55.34 in the men’s 100 breaststroke, erasing the all-time mark of 55.41 set by Adam Peaty last month during the International Swimming League season in Budapest. Peaty had first broken the record one week prior in 55.49, erasing Cameron van der Burgh‘s 55.61 that had stood since 2009.

Coming into this meet, Shymanovich held a best time of 55.49, done in the same race when Peaty set the record in 55.41. You can read more about this record here.

The 26-year-old Shymanovich wasn’t done there, as he appeared at the end of the session on Minsk’s mixed 200 medley relay. Having already recorded the fastest 50 breast relay split of all-time at the meet, clocking 25.04 on day one in the men’s medley relay, Shymanovich put up the first-ever sub-25 leg in 24.92.

Prior to the competition, he held what is believed to be fastest split of all-time at 25.20 from the 2018 SC Worlds.

Shymanovich wasn’t the only star of the day, as five other national records went down, with Grigori Pekarski having a hand in three of them.

Pekarski, 22, came into the day on fire, having already broken Belarus’ National Record in the 100 free, and having come very close in both the 50 free and 100 fly.

During the prelim session, the Belarusian National Team swam a time trial in the men’s 4×100 free relay, with Pekarski leading off in 47.08 to break his national record of 47.32 set two days prior.

Joining Shymanovich and Pekarkski in the record-breaking party all meet was Anastasiya Shkurdai and Alina Zmushka, and they kept things going on Saturday.

Shkurdai, coming off of smashing the national record in the 200 back twice on Friday, lowered the 100 back record in 56.87 on the meet’s final day, erasing Aliaksandra Herasimenia‘s 2009 mark of 56.98.