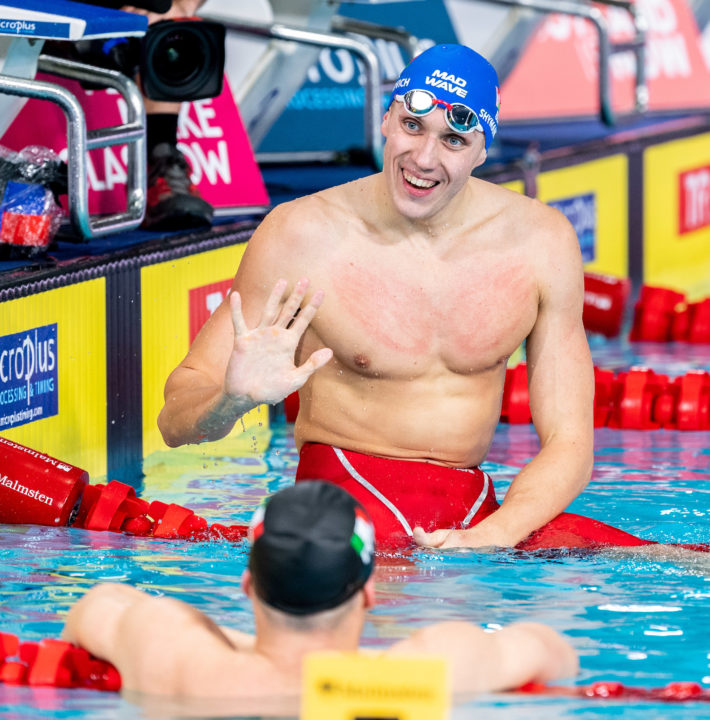 Ilya Shymanovich's breaststroke split of 25.04 on the men's 200 medley relay in Brest is the fastest in history. Archive photo via Giorgio Scala / Deepbluemedia / Insidefoto

The opening day of the 2020 Belarusian Short Course Championships yielded some outstanding results across the board, as three swimmers broke national records and several others had standout performances.

The country’s breaststroke star Ilya Shymanovich had a strong start to the three-day meet, winning the men’s 200 breast in a new Belarusian Record time of 2:02.77. You can read more about that record here.

Towards the end of the session, the 26-year-old delivered an even more eye-popping performance, unloading the fastest 50 breaststroke split in history on the men’s 200 medley relay.

With a reaction time of +0.22, Shymanovich recorded a split of 25.04 for his Minsk team, well under what is believed to be fastest mark in history. Shymanovich previously held that distinction with his 25.20 from the 2018 Short Course World Championships in Hangzhou.

While we saw Shymanovich, Adam Peaty and Emre Sakci all throw down historically fast breaststroke swims during the ISL season, there weren’t any 4×50 relays to give the athletes an opportunity to have a run at an all-time 50 breast split.

Minsk won the event in 1:34.09, with Viktar Staselovich also throwing down a quick 23.19 leading off the relay, just off his PB set earlier in the session when he won the individual 50 back (23.18).

Grigori Pekarski, who set a new national record in the 100 free prelims, also had one of the all-time fastest fly legs for third-place Mogilev Region, hitting a 21.94. According to USA Swimming’s database, that ties for the 11th-fastest relay split ever, with the fastest coming in at 21.61 from Russia’s Oleg Kostin.

After setting that 100 free national record in the prelims at 47.32, breaking the 2015 mark held by Artyom Machekin of 47.44, Pekarski fell to Ruslan Skamaroshka in the final. Skamaroshka matched his heat swim in 47.43, while Pekarski took second in 47.86 and Yauhen Tsurkin took third in 47.91.

23-year-old Alina Zmushka took two seconds off her national record in the women’s 200 breaststroke in the prelims, and then chopped off two more in the final.

Zmushka also notably had the fastest breast split in the field by a wide margin on the women’s 200 medley relay, clocking 29.29 for runner-up Brest.

Anastasiya Shkurdai, who was Shymanovich’s teammate during the ISL season with Energy Standard, had a strong showing on the opening day of the meet as well, winning a pair of individual events in the women’s 50 back and 100 free.

Three-time Olympic medalist Aliaksandra Herasimenia holds both the 50 back and 100 free national records with respective times of 26.12 and 52.06.