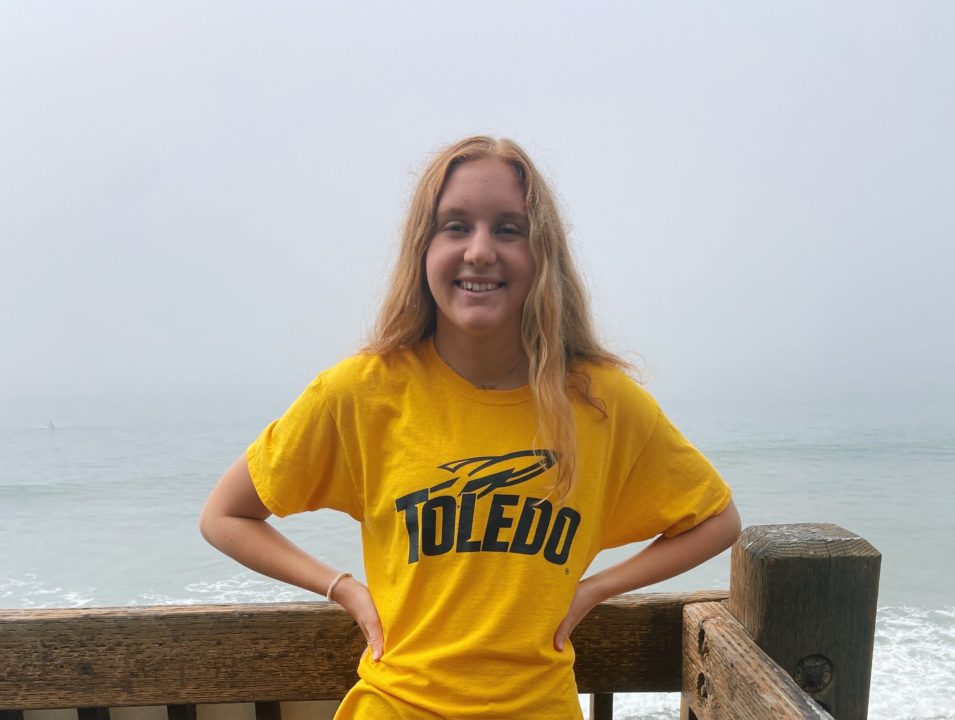 “I am so unbelievably excited to announce my verbal commitment to continue to swim and study at the University of Toledo! I am so thankful for my family, friends, coaches, teammates, and everyone else who has helped me along the way. So blessed to be able to continue this journey at such an amazing school. Go Rockets!!”

Swift specializes in distance freestyle, placing third in both the 400 and 800 free at the San Diego-Imperial Long Course Junior Olympic Champs in the summer of 2019. Continuing her distance success, she scored in both 1000 and 1650 free at the East Los Angeles Speedo Champions Series, as well as hitting bests in the 500 and 1000. She placed 23rd in the 1000 and 20th in the 1650 at the Carlsbad Sectionals last March.

Along with North Coast Aquatics, Swift swims for Carlsbad High School about 35 miles north of San Diego. As a Lancer, she has finaled four times at the CIF San Diego Sectional Champs, including two top 8 finishes in the 200 and 500 freshman year and an 11th and 4th place finish in those events respectively her sophomore season.

At Toledo, Swift will immediately add needed distance strength, especially in the 1650, where Toledo only had one scorer in the event at the 2020 MAC Championships. Her times would have placed her 2nd in the 1650 and 3rd in the 1000 free on the team last season and picked up points at conference, with her 1650 best equaling a 15th place finish at MAC Champs. Further cementing distance depth at Toledo, Swift will have a great training partner in fellow class of 2025 commit Lindsey Creek, who also would have scored in the 1650 at last year’s conference champs.

Will McKinney began his career in journalism as a freshman in high school, when he first reached out to SwimSwam about covering the 2018 Texas UIL 5A and 6A State Championships meet. Since then, he has continued to report on all levels of competitive Texas swimming. He is currently a …

More from Will McKinney
See All