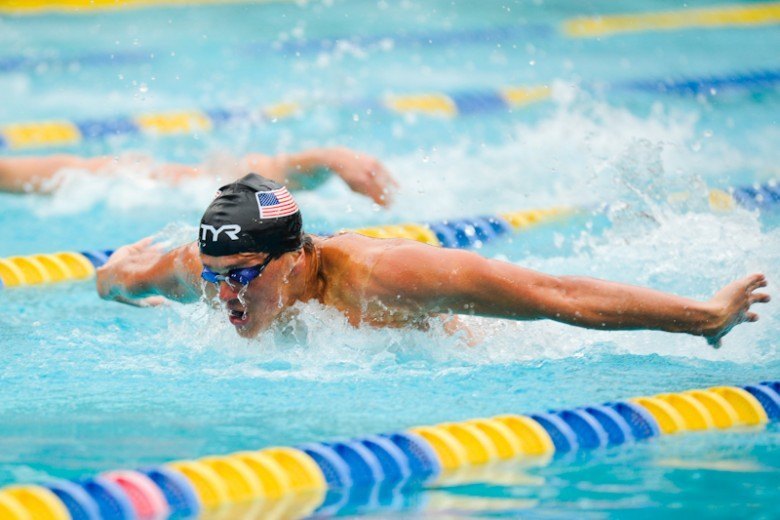 There was a big mid-day exodus on the final day of the 2012 Fran Crippen Memorial Swim Meet of Champions as swimmers from across the state hopped back home to get ready for the new week, however there were still plenty of big names hanging around to make this last day plenty interesting, especially the breaststrokes.

In the women’s race, Jessica Hardy scratched the final after taking the top seed in the prelims in 1:07.93. But the other Trojan breaststroking queen Rebecca Soni hung around for the last session, and tore her way to a 1:07.43. That’s actually her slowest finals swim of the season (beginning after last year’s World Championships).

As we move into May and June, the upcoming Charlotte Grand Prix should be when we start to see her times come back down. As the comments on this finals session across-the-board seemed to indicate that the meet had become pretty laid-back across-the-board, this is probably a good time. But look for a 1:06-low at least in Charlotte to show that she’s back-on-track.

Swedish swimmer Rebecca Ejdervik was 2nd in 1:09.57. She’s still awaiting final decision on the Olympic breaststroke spots back home, with still a few more opportunities left to give the selectors decision criteria. Caitlin Leverenz was sluggish off of the blocks and was only 5th in 1:11.69.

In the men’s race, Eric Shanteau took top honors in a 1:01.47. He’s probably not going to take an Olympic spot in this 100, but for what he’s got that’s a pretty good mark for him in this shorter distance. Piled on top of his 200 from Saturday evening, this was overall a successful meet for him.

In close second behind him was teammate Mike Alexandrov in 1:01.84. Ed Moses, who’s now training at Tucson Ford in Arizona, was 8th in 1:04.68. That time tied him with the winner of the B-Final, 40-year old Olympic Trials qualifier Steve West. West had already qualified for the Olympic Trials in the 200 breaststroke, but this swim now gives him a second qualification.

In the women’s 100 fly, Lyndsay DePaul was the only swimmer to break the minute-mark, as she took the win in 59.84. 17-year old Olivia Barker out of the Sandpipers club was 2nd in 1:00.84. Behind those two, there were a lot of swimmers whose coaches probably won’t be ecstatic with their finals’ swims, including Cal’s Cindy Tran, who was 8th in 1:03.41.

Much like Tran, fellow Cal Bear Tom Shields is working on turning his short course success, thanks to monstrous underwaters, into long course success. Big underwaters are still an important part of long course swimming (just ask Michael Phelps and Natalie Coughlin), but Shields really needs to improve on top of the water. So much of his college races are swum submerged that he’s only taking 18 strokes in a 100 fly. In long course, he’ll have to take at least double that many strokes.

His win here in 52.90 is the second-fastest time of his career and moves him into the world’s top-40. So-far, so-good. That also broke a pool record set by 1992 Olympic Champion Pablo Morales all the way back in 1986.

Kenya’s Jason Dunford, who trains at Stanford, took 2nd in 53.51. 15-year old Kyle Gormay of the Redlands Swim Team continued to stamp his mark on this meet with a 5th-place finish in 55.52.

National Teamer David Plummer won the men’s 100 backstroke in 54.52. That’s in the right range for him that he’s typically in at this time of year; he’s another swimmer who needs to make a bit of a statement in Charlotte in a few weeks.

The women’s 100 back was won by Fresno Pacific’s Cheyenne Coffman in 1:02.00, which is by far her best time. 15-year old Ella Eastin was 2nd in 1:02.79 (keep an eye on her as a Teri McKeever target for Cal, as they’ll be ready for the next round of backstrokers by the time she graduates college). NCAA Champion Cindy Tran was 3rd in 1:03.03.

The women’s 1500 free, though not an Olympic event, isn’t always a throw-away at this meet. Remember that the World Record was swum at this same meet back in 2007. This year, however, it was a more leisurely pace. Mission Viejo teammates Chloe Sutton and Ashley Twichell coasted through about 1300 meters, flipping nearly identically. Then (seemingly intentionally) they went into a dead-sprint for the last 200, swimming 2:05’s on the finish. Sutton would beat-out her teammate to take first in 16:35.38 to Twichell’s 16:35.70. The ending marks weren’t that impressive, but those last 4 lengths are really fast for a swim of this distance. That shows some awesome endurance on the back of huge training.

There was a lot of great swims at this meet, but not to be overlooked was a full 8 American Records from the USA Resident Team. Mallory Weggemann, who is expected to be one of the superstars of this summer’s Paralympics, was at this meet too, but she didn’t get any records. A full listing of records that went down is below.

Mallory Weggemann prepares for the start of a 5:42.10 in the 400 free on Thursday evening. (Photo Courtesy: Melissa Lundie)

The big name was Anna Johannes. The 18-year old is a fast-rising star in American swimming, including 5 wins at last year’s Parapan American Games.

It seems like Tom Shields has improved his swim in long course. 52.90 in a big training period is very good for him.
And I agree with you about Ella Eastin. I’m still waiting for a breakout swim from her but I think it will happen very soon. She’s only 15 and she’s very talented.