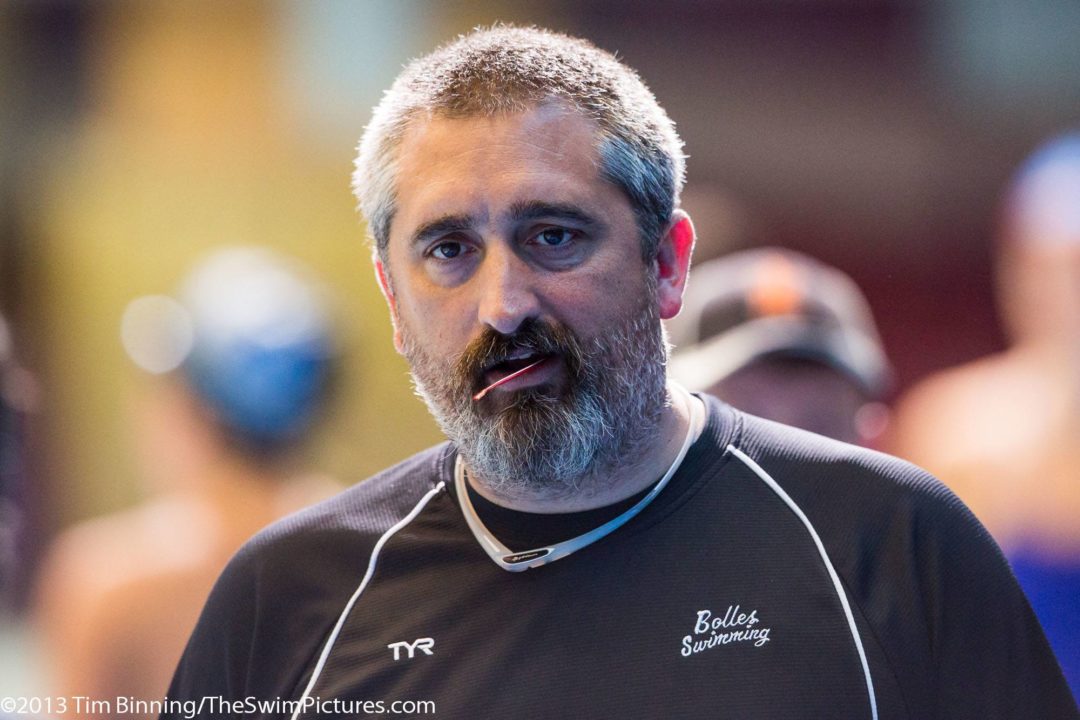 Bolles coach Sergio Lopez will step down for a position in Singapore at the end of 2014. Archive photo via Tim Binning/TheSwimPictures.com

Tonight in Tokyo, leukemia survivor Rikako Ikee threw down an inspirational swim to take the gold in the 50m fly, her first since returning to competition.

The premier Japanese men’s butterfliers are epitomizing consistency as of late, with Naoki Mizunuma and Takeshi Kawamoto (pictured) getting it done in Tokyo.

Bolles Coach Sergio Lopez-Miro, who has been the head coach of the impressive club/high school combo program since 2007, has informed his team that he will be stepping down from that role to assume a position as the head coach of the Singapore National Team, multiple sources have confirmed to SwimSwam today. His swimmers were told after lunch, with a parents meeting in the evening to share with the rest of the team.

“It’s a little heartbreaking,” Lopez said of leaving Bolles. “I feel like I’ve grown as a person and as a coach at Bolles, and it was a great place for both me and my family.”

Lopez will now become one of four coaches at the Singapore Sports Institution that will advise coaches across all sports. That means Lopez will be impacting multiple sports outside of swimming, though his expertise in aquatics will still be a major asset to the national staff.

He emphasized the importance of his children’s education in his family’s decision – Lopez has two children just heading into their high school years, and made sure they would have strong educational opportunities in Singapore before deciding to take the job.

Representing Spain at the 1988 Summer Olympic Games, Lopez won an individual bronze medal in the 200 breaststroke as an athlete. Since then, he has become one of the world’s most successful coaches at developing talent, which includes producing two of the fastest High School swimmers in history last year: sprinter Caeleb Dressel and butterflier Joseph Schooling. Another former swimmer of his, Ryan Murphy, won two backstroke NCAA Championships in his freshman season at Cal.

Schooling is the Lopez’s connection to Singapore, as he is a Singapore native. This summer, Schooling, who is now a freshman at the University of Texas, earned a silver medal at the Commonwealth Games in the 100 fly and was the Asian Champion in the same.

That success earned Schooling $370,000 in reward money from his national federation, before taxes, showing that there is plenty of money to be made in the Singapore federation for successful coaches and athletes. Lopez was also coaching former Olympic finalist Tao Li at Bolles until recently when she returned to Singapore to continue training.

Lopez has developed a wide range of talents; in addition to the individual successes listed above, the Bolles School’s high school team has won 27-straight boys State Championships and 24-straight girls State Championships in Florida’s Class 1A. His teams hold 5 out of the 11 independent school National High School Records in yards, all from the Lopez era. Lopez was also won the Swammy for both the 2012 Club and High School Coach of the Year.

Lopez has been the rumored favorite in Singapore to take over this position after British coach Ian Turner stepped down in August due to health concerns. The Singapore Swimming Association has called a meeting for Friday and invited all national swimmers and all 34 clubs, where they are expected to make the same announcement.

Now there will be a scramble to find his replacement at Bolles: a position so coveted, that seven years ago it led Lopez away from a role as the head coach at West Virginia.

No succession plan has been in place (Bolles is currently without a headmaster as well), but Lopez told parents that he was hoping to stay through December 31st.

It is not about the money.Believe me!

Which, even if it were the sole motivation here – not really a bad thing, in itself.

There is some rumours about a financial lady at Bolles who decided to end the program. She is giving coach Sergio a bad time since last year.That is why he almost went to a college in summer 2013 .

0
0
Reply
Another Parent
Reply to  Parent

Which college did he almost go to? That would have been one lucky program.

0
0
Reply
Parent
Reply to  Another Parent

Auburn. As a assistant coach.

But what i don’t understand is why he turned down the Auburn Job. They must be paying an enormous amount of money for him to take the Singapore job over the Auburn job.

This was summer of last year.Singapore was not on the table.The problem at the time was the Bolles School administration and it is now the same situation.And also they will lost a lot of swimmers,specially borders that will not come anymore without coach Sergio.

No surprise. Admissions and finance are trying to shut all athletics down (world class swimming program and state championship football). That is a fact……no speculation. Question is why? Do they think it enhances academics? Really? Or is Bolles going under as a school?

What on earth are you talking about? How is admissions trying to shut down the athletic program?!

Shutting down the athletic programs will not happen….your taking this way out of proportion. It has to do with salary thats it. You dont go there or have anything to do with that school so dont mention the school going under…

BOLLESKID – the word is you’re, not your.

Oh, enlightened one. How long have you worked in the Bolles admin? Why not ask Sergio or the head football coach……or even the AD how admissions and finance can control it. They can and do by rejecting qualified applicants at their discretion. No questions asked. To your question…that’s what I am talking about. You are either naïve, dumb or have your own agenda. You, your ideas and the front office are ruining a great school with great tradition.

Interesting. I know of at least 4 kids who swim who were admitted under various circumstances and at various stages of their hs career last spring, including one who applied long after the deadline. So what “facts” and personal knowledge do you have otherwise to support your assertion?

Your brilliant statement: ” I know of at least 4 kids who swim who were admitted under various circumstances and at various stages of their hs career last spring, including one who applied long after the deadline.”

And you ask me for facts? Those aren’t facts you posted. That’s conjecture and opinion. Who cares for and believes those statements? I for one do not. Why did that coach leave? It’s called a railroad job. And it’s not over yet.

You don’t want facts. The swim coach left for whatever reason. Kids are having a tough time getting into Bolles with 3.9 GPAs and 1300 plus on their SAT. That’s a joke. College prep, my aspen tree. ADMISSIONS AGENDA.… Read more »

I agree with Mr. Bombay. We all know that the salary for the head coach of a foreign NATIONAL team is much more than it could ever be than coaching for a high school in the U.S. (despite however many national champs it has and olympians it produces). I left Bolles recently but have been keeping up with how things are doing internally and I can’t say they are great. Staff is being let go, they are currently headmaster-less after having 2 new people come in after the irreplaceable Dr. Trainer and neither of them fit in. Not to mention the chaos that is going on with the dorm staff and boarding situation. This will definitely deter kids from coming… Read more »

In addition to being a troll, you’re proof that comments sections can quickly turn into the cesspool of the Internet. Let me point out to others who might believe an iota of what you’re saying–students in grades 6 to 11 don’t take the SAT to get into Bolles, which is a high school, not a college. You’re mythical applicant with the 3.9 GPA/1300 SAT was clearly in the wrong place.

Moreover, Coach Sergio has himself stated his reason for leaving Bolles is to take a fantastic opportunity in Singapore, and not because Bolles is ending sports as we know it. I take him at his word. To say he’s one of the great high school coaches is an understatement, and… Read more »

I do know applicants who have taken SAT in middle school and applied for Bolles. The world is changing as it is always. You’d be surprised to see how many middle schoolers are taking SAT or ACT, let along for the transferred student in the high school years.

as an ex-bolles swim parent, Sergio, his coaching and his personality, will be sorely missed! and very hard to replace!

I understand the disappointment you feel losing Sergio. My daughter was a sophomore at wvu when he left us. Sergio is a fantastic coach and man. It was heartbreaking when he left wvu but I could understand the allure of Bolles and what he was offered.