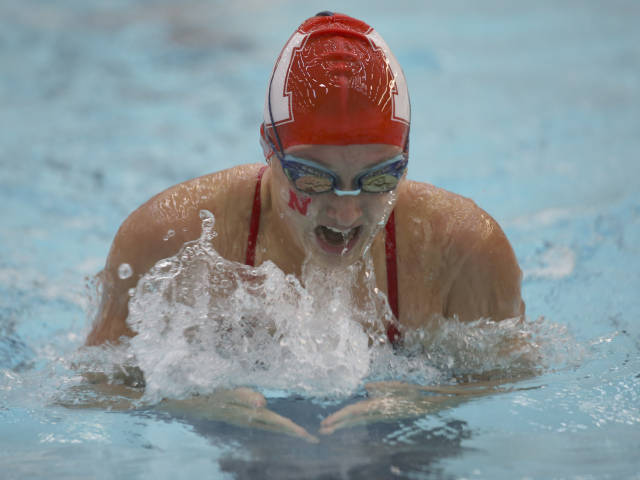 Madison Coughlen (Nebraska) was another double event winner, sweeping the fly events. Coughlen was dominant in the 200 fly, swimming a 2:01.70 to lead the field by nearly 4 seconds. Impressively, Coughlen also had the fastest split in the field on each respective 50. She then won the 100 fly with a 55.91, touching as the only swimmer in the field to crack 57 seconds.

The Nebraska swimming and diving team sent the seniors home happy with a 70 point victory in the Big Ten opener vs Illinois on Senior Day, winning 185-115. The five Husker seniors that were honored before the meet were Tori Beeler, Carla Gonzalez, Savanna Savitt, Lindsey Stalheim and Gwen Worlton. The seniors helped Nebraska in a big way combining for 40 points and paving the way to a victory over the Fighting Illini. The win today propels Nebraska to 5-1 in duals and an undefeated season at home.

The Huskers started off strong, winning the 200 medley relay in the first of two this morning. It was the Nebraska A relay that finished first (1:45.10) in a tight race, featuring Haebig, Worlton, Murray, and Beeler. In 200 freestyle relay, it was the Nebraska A Relay crossing second (1:37.06), with swimmers Haebig, Gonzalez, Savitt and Barth. The Nebraska B relay finished close behind and finished in third (1:38.71), with Pentlarge, Worlton, Murray and Lanaghen.

Sara Troyer had another nice outing on the diving boards, winning both the one meter (274.13) and three meter (339.00) dives. Her score in the three meter dive proved to be more than enough and even gave her a new career best, breaking her previous best of 326.32. Grace Tiernon landed in third place in the one meter (236.33), while Roman was just three points behind, landing in fourth (233.18). Roman also captured second place in the three meter (265.43), while Tiernon grabbed fourth (238.80).

Tori Beeler had a great senior day, winning two events and finishing another in second. She took home first place in the 200 IM (2:03.91), which makes it four total victories in that race on the season. Berkeley Livingston rallied behind Beeler, grabbing third place (2:08.13).

In the breaststroke races, it was seniors Tori Beeler and Gwen Worlton swapping victories. Beeler grabbed her second victory of the afternoon in the 100 breast (1:04.85), while Worlton grabbed second place (1:05.08). In the 200 breast, Worlton finished ahead, winning the race (2:19.41), while Beeler snagged second in a close race (2:20.09).

Madison Coughlen had another strong performance for the Huskers today as well, dominating in the butterfly events. Starting with the 200 fly, the first three finishers were Huskers, lead by Coughlen taking the crown (2:01.70). Berkeley Livingston swam to a solid second place finish (2:05.53), while Maggie Berning was just behind, finishing in third (2:05.65). In the 100 fly, it was Coughlen again who took first place (55.91), who was then followed by Kaitlyn Barth in third place (57.47) and Izzie Murray rounding out the bunch, grabbing fourth (57.84).

The Huskers swept the Illini in the 1000 yard freestyle handily, with Rachel Powers, Katelyn Kilpatrick and Molly Rosenthal. Powers lead the way, winning her third race of the season (10:21.58). Kilpatrick was just behind, swimming to a good second place finish (10:23.08), while Rosenthal pulled up next in third place (10:25.74). Audrey Coffey won her first race of the afternoon in the 500 yard freestyle (4:58.17), while Rachel Powers (5:05.79) and Maggie Berning (5:07.09) finished in fourth and fifth places, respectively.

The Huskers finished out the home season at the Devaney Natatorium with a 3-0 record in duals, and improve to 5-1 in duals on the year. The Fighting Illini drop to 4-6-1, with a fifth straight loss in duals. Nebraska’s next meet will take place in Piscataway, New Jersey against Big Ten opponent Rutgers. The Huskers face the Scarlet Nights in a two-day dual from Saturday, Jan. 31 at 4 PM through Sunday, Feb.1 starting at 9 AM.

LINCOLN, Neb. – The University of Illinois swimming and diving team fell 185-115 to Big Ten foe Nebraska on Saturday afternoon at the Devaney Center Natatorium. Freshmen Athena Salafatinos earned a place in the record book with an all-time top 10 fastest individual time in the 100 backstroke.

“It was a very competitive meet from start to finish,” said head coach Sue Novitsky. “We would have liked the outcome to be different, Nebraska competed strong on their senior day.  We challenged them as a team to be willing to stretch and choose to act to keep working on increasing confidence.  I was proud of how the team showed courage and was ready to compete.  Now we can go back to work and fine tune details heading into championship season.”

Freshman Jeanri Buys recorded a personal-best time of 2:11.31 for sixth-place in the 200 butterfly and freshman Kaleigh Haworth posted a personal-best 1:06.25 in the 100 breaststroke to finish the event in fourth. Sophomore Emily Bolger set a season-best in the 50 freestyle, as the Palatine, Ill., native came away with seventh-place with a time of :25.01.

Senior Kristin Anderson claimed the gold in the 50 freestyle, touching the wall with a time of :23.86.

The 200 freestyle relay team of freshman Isabelle Guerra, Anderson, Salafatinos and sophomore Abigail Cabush combined for a time of 1:36.15 for first-place. The 200 medley relay team membered by redshirt senior Aby Olson, freshman Divya Kale, senior Rebecca Corzine and Anderson finished second in the event with a time of 1:45.13.

Freshman Erin Young scored a 250.50 to come away with third place in the three-meter dive. Sophomore Madelyn Crosby finished fifth in the event with a six-dive total of 224.40.

In the one-meter dive, Crosby claimed second, while Young placed fifth, with scores of 255.90 and 214.95, respectively.

At what point does Illinois hit the reset button? Seriously?!?! This is a classic example of a token title 9 team. The coaching staff and swim team should be embarrassed.

Might as well include the Nebraska staff as well. What has Pablo done? Pillow fight of the week

Keyboard warriors like this have the same vision as someone looking through a straw. Pablo has brought the best out of his recruits and continues to develop these ladies in the pool and classroom. He has been nothing but a positive force for our swimmer. Class, honesty, and mentorship may not exist while clacking away on your laptop, but it’s working in Nebraska.

Must have struck a nerve. Nebraska has not been competitive since coming to the big ten. They struggled in the big twelve. Finishing in the bottom half year in and out shouldn’t be acceptable for an athletics dept as storied as NU. Remove your bias, & ask yourself if Nebraska and Illinois are truly fielding a competitive programs year in and out? Look at the teams both programs have beaten. ISU AND MID MAJORS. NU will knock off a terrible Rutgers team, but they haven’t recovered since were gutted in the mid 2000’s.
Stop using character and the classroom as a crutch. At the end of the day it’s always wins and losses.
Also let’s not forget the… Read more »

Novitsky’s record speaks for itself and not in a good way. McGill’s only claim to knowing anything about the sport is his brother. And talent doesn’t run in the family. The current senior class was the last decent recruiting class but that was pre-McGill. Where are Guyett Kolar and Kosinski? Wasted talent. Word has it all 3 are hurt. How do the coaches manage to consistently ruin the swimmers and consistently get away with it? The Illini administration should be ashamed of themselves.

McGill is a club coach at best. Probably should spent less time on instagram and more focusing on the basics.