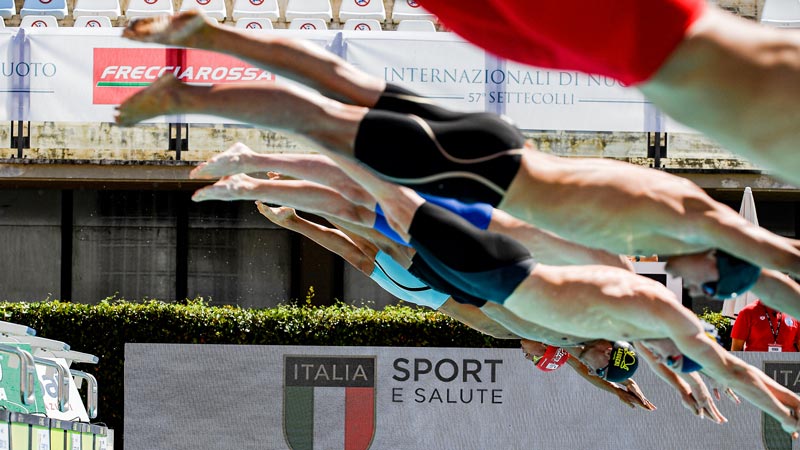 Catch up on race video action from days 1 & 2 at the 2020 Sette Colli Trophy before following along with today's final session. Current photo via Giorgio Scala/DBM/Insidefoto

We’re entering the final day of the 2020 Sette Colli Trophy, with the meet doubling as this year’s Italian National Championships.

Both domestic and visiting foreign stars have impressed across multiple distances and disciplines, giving us a glimpse that they’re coming back to form big-time after the shakeup due to the coronavirus pandemic.

Below is a selection of races from Rome, courtesy of YouTuber Swim Swimming.

Just as his teammate Gabriele Detti nearly overtook his own 400m free Italian national record, Gregorio Paltrinieri came super close to toppling his own mark in this 800m free final.

Touching the wall by a wide margin in 7:40.22, Paltrinieri fell less than a second outside his own NR of 7:39.27 from 2019. He settled for instead beating Detti by well over 5 seconds en route to taking the title in the 2nd fastest time of his career.

Detti’s time of 7:46.04 was good enough for silver after Paltrinieri took down his meet record of 7:43.06 from 2016. Domenico Acerenza collected another bronze after finishing 3rd in last night’s 400m, earning a time of 7:48.74 in this longer distance.

Italian Olympic icon Federica Pellegrini put on a show in the women’s 100m freestyle, grabbing gold in 54.33 to edge the field by over half a second.

Speaking of last year’s World Championships, that’s where 20-year-old Valentine Dumont produced her Belgian national record in this event in 54.90. Tonight, she was just .01 shy of matching that effort, wrapping up runner-up status in 54.91.

It was an Italian sweep of the men’s 400m free, led by national record holder Gabriele Detti. In fact, 25-year-old Detti’s winning time tonight of 3:43.73 fell just .50 outside of his national record, although it did overtake his own Sette Colli meet record of 3:44.21 he logged 4 years ago.

Runner-up status went to Marco De Tullio with the man nearly hitting his own personal best as well. De Tullio logged a time of 3:44.94 tonight, while his PB rests at the 3:44.86 he produced for 5th place in the Gwangju final.

Domenico Acerenza also got on the podium, courtesy of his 3:46.88 result.

Yesterday’s 1500m freestyle winner, Martina Caramignoli, doubled up with another gold, this time in the 800m free event. Sans Simona Quadarella, Caramignioli took total control of this race, leading wire-to-wire to log a winning effort of 8:24.16.

Caramignoli’s time represents yet another personal best for the 29-year-old who also put up her first-ever 1500m mark last night under 16:00. Last December in this 800m free, Caramignoli touched in 8:27.92 to hit a best time. Tonight, she dropped nearly another 3 seconds to get to the wall first.

Coming in for silver was teenager Giulia Salin, who put up a solid performance of her own in 8:26.81. She scored a new Italian Age Record in the process, torching her previous PB of 8:28.99 that garnered her bronze at the 2019 World Junior Championships. Salin also hit a new Age Record last night in the 1500m.

Italy’s fastest 100m freestyle ever, 21-year-old Alessandro Miressi, did not disappoint in his specialty event tonight, clocking a new meet record en route to his victory.

Silver this evening went to Ivano Vendrame, with his 48.70 keeping up his momentum from last December’s Italian Championships. There in Riccione, Vendrame put up the fastest time of his career in 48.38.

Manuel Frigo also got on the board tonight, hitting a time of 48.75 for his 3rd best time ever.

Finishing just .44 outside of his own national record, 18-year-old Federico Burdisso manhandled the 200m fly field in a big-time 1:54.83. Splitting 53.36/1:01.47, Burdisso produced the 3rd fastest time of his career, sitting only behind his record and other sub-1:55 outing of 1:54.64 from last year’s Italian National Championships.

With Burdisso’s monster effort here, he further establishes himself as a world-class and potential minor medal threat at next year’s Olympic Games.

Not to be missed is the fact that Alberto Razzetti cranked out an impressive performance in his own right, beating his previous PB by nearly 2 seconds. Entering this meet the 20-year-old’s lifetime best sate at the 1:57.62 from the 2019 Italian Championships.

Italians have become a powerhouse. They used to have a one or two great swimmers, now they have half a dozen who could medal on any World event