Second-half Alabama domination spells doom for Cincinnati on the road 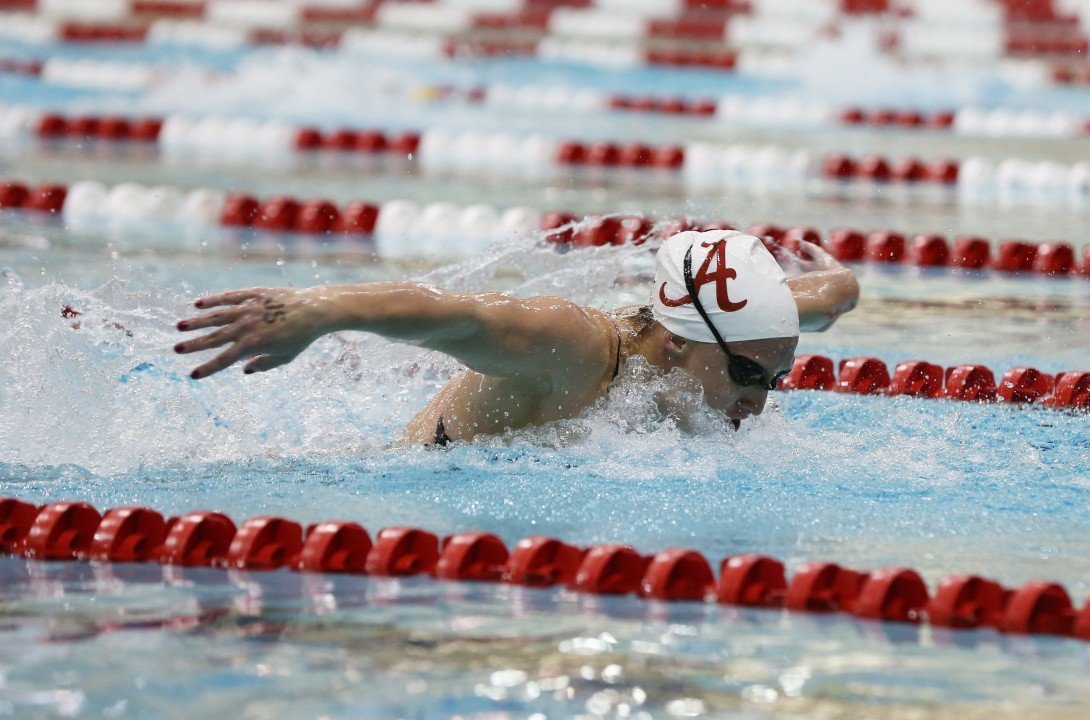 The Alabama Crimson Tide men and women came up with suffocating second-half performances to crush Cincinnati during the 'Bama senior night and the team's final tune-up before the SEC Championships. Current photo via Alabama Swimming & Diving

The Alabama Crimson Tide men and women came up with suffocating second-half performances to crush Cincinnati during the ‘Bama senior night and the team’s final tune-up before the SEC Championships.

From the first diving break on, the Crimson Tide were absolutely unstoppable, going 1-2-3 in 12 of 16 individual events to end the meet.

It was a night honoring the Alabama seniors, while the visitors competed without 7 of 9 members of their senior class, who were held out/suspended for an incident on the team’s training trip.

It was a bit of a rocky start for Alabama on a night when they struggled to earn freestyle wins. Cincinatti took the first two individual events back-to-back, first taking advantage of Alabama’s distance weakness. The 1000 free went to Cincy freshman Sara Wanasek, who went 10:29.47 and led a 1-2 finish. Then in the 200 free, the Bearcat’s marquee swimmer Jackie Keire popped a 1:50.61 to take home the win.

Easing that deficit, though, was the fact that ‘Bama went 1-2 in the 200 medley relay to open up the meet. That meant that the Crimson Tide still held a 1-point lead even after dropping the first two individual races.

The sprint freestyles provided some of the best entertainment of the night. In the 50 free, Alabama’s Bailey Scott was able to deny Keire a second win, taking the event 23.36 to 23.48. But Keire struck back in the 100 free, going 51.42 to beat Scott.

From there, though, it was all Alabama, and that’s no hyperbole. The home team went 1-2-3 in five of the next six races, with the only exception being a 1-2 finish in the 100 fly.

That butterfly race was led by senior Kaylin Burchell, who showed off her versatility on the night honoring her graduating class. Burchell is a rising breaststroker on the national stage, but pulled off a 56.53 to crush the field in the 100 fly.

Finally, the Crimson Tide dominated on the boards as well, with Taylor Zablocki taking both 1-meter and 3-meter to round out a 189-103 victory.

The men’s meet started much the same way, with Alabama going 1-2 in the 200 medley relay, but then dropping the 1000 free to Cincinnati. That event went to Cincinnati freshman Chris Bready, who easily topped the competition with a 9:21.48.

But ‘Bama answered back with the first of two Connor Oslin wins. The sophomore backstroker branched out into freestyle, going 1:40.04 to beat breaststroker and teammate Anton McKee. Oslin came back to lead a 1-2-3 of the 100 free in 45.86.

That was part of a devastating second-half run that Alabama went on to put the meet out of reach. From the 50 free on, Crimson Tide men went 1-2 or better in every single one of the ten remaining events. That included six 1-2-3 finishes and a 1-2 of the 200 free relay.

Leading a pair of top-3 sweeps in there was diver Brent Sagert, who topped 300 points on 1- and 3-meter and nearly cracked 400 with his win on the higher springboard.

Some other winners from that huge, ten-event run:

Also impressive early on was freshman Luke Kaliszak, who is looking like a great young prospect for the Crimson Tide. Kaliszak took the 100 back in 49.41, beating all competitors by over four seconds.

The Alabama men and women are off until the SEC Championships in just under a month. The Cincinnati Bearcats head to Western Kentucky for a dual tomorrow, and take on Kentucky at home next week.