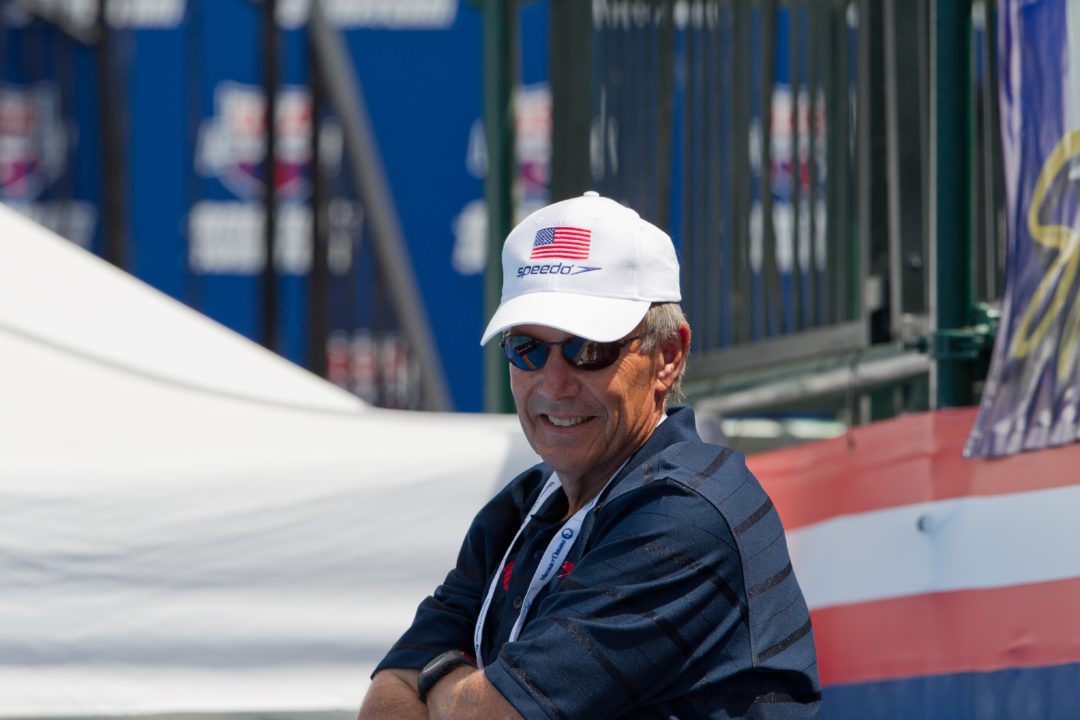 Student-athletes at the University of Iowa have filed for an injunction that would stop the school from eliminating its women’s swimming & diving program.

FINA has updated its rules to comply with the changes to the 2021 World Anti-Doping Code, including reducing suspensions for ‘substance abuse’ drugs.

Longtime USA Swimming Coach and Benefactor Dia Rianda sues Mark Schubert after she is fired for purportedly trying to keep Coach William “Bill” Jewell from having access to children while under investigation by USA Swimming for alleged sex abuse charges.

SAN JOSE, CA – September 17, 2012 – USA Swimming coach Dia Rianda has hired the sexual abuse law firm of Corsiglia, McMahon  & Allard to file a wrongful termination lawsuit (Orange County Superior Court, Case # ) against former USA Swimming Olympic Team Coach Mark Schubert and his swim club, Golden West Swim Club (GWSC). Rianda claims in the lawsuit that she was fired by Schubert for trying to keep Coach William “Bill” Jewell away from children while he was under investigation by USA Swimming for alleged sexual abuse charges and for warning Schubert about complaints from parents about Jewell’s inappropriate behavior.

According to the complaint, shortly after Rianda was hired as General Team Manager and Head Age Group Coach of GWSC, Mark Schubert hired his former assistant coach from USC, William “Bill” Jewell, as a GWSC assistant coach even though Jewell had been fired from his previous position as coach of Fullerton Aquatics Swim Club (“FAST”), an Elite Training Center funded by USA Swimming, and was under investigation by USA Swimming for the alleged sexual abuse of swimmers.

The lawsuit states that Rianda informed both Schubert and USA Swimming about Jewell’s behavior, including alleged inappropriate conduct she observed, along with a series of complaints from club parents. Specifically, Ms. Rianda complained to both Executive Director Chuck Wielgus and “Athlete Protection Officer” Susan Woessner about Jewell’s sexual misconduct.  The complaint states that Schubert threatened Rianda that her future as a coach would be destroyed if she continued to question Jewell’s behavior, which by this time had been under investigation by USA Swimming for nearly one year. Shortly thereafter, the lawsuit states that Schubert fired Rianda by making it clear that the only reason her employment was terminated was due to her complaints concerning Coach Jewell’s alleged inappropriate conduct.

“Dia Rianda loves the sport of swimming. This lawsuit is about protecting children and not about money. This is a family that contributed nearly half a million dollars toward the building of a swimming pool at Carmel High School, donated their time and money into building a swim program in Monterey County, and are major financial contributors to the USA Swimming Foundation. Dia just wants USA Swimming to get rid of the bad eggs that continue to sit at the top of its leadership structure.  Until that is done, this kind of corruption will manifest itself over and over again, in which case kids will continue to be exposed to sexual abuse and harassment”, said Robert Allard, attorney for Rianda.

As a longtime USA Swimming coach, Rianda considered Schubert a longtime friend and mentor, even bringing the Hall of Fame coach to share his expertise with her swim programs in Salinas and Palma High School. Because of that relationship, the lawsuit claims that Schubert called Rianda to help him resurrect the GWSC program as Schubert was dealing with personal issues.  Rianda, according to the lawsuit, uprooted to Orange County from Carmel, assumed control of operations and brought the program back to national prominence.

Jewell, according to the complaint, was originally hired at FAST as a result of Schubert working behind the scenes to take control of a team that he lost when he was the head national coach for USA Swimming. The complaint states that in order take power from FAST coach Sean Hutchison, Schubert surreptitiously hired a private investigator to film and/or photograph Hutchison engaging in alleged inappropriate sexual activities with female swimmers.  Schubert, the lawsuit alleges, then used the incriminating evidence concerning Hutchison to leverage a $625,000 “confidential” settlement from USA Swimming, which at the time was reeling in the midst of a sex abuse scandal and was highly motivated to shield this information from public view.

In exchange for the hundreds of thousands of dollars that he received, Schubert, according to the lawsuit, promised that he would not publicly discuss any sexual abuse allegations against USA Swimming coaches, including Hutchison and another prominent USA Swimming coach named Rick Curl.

According to the complaint, Schubert confided to Rianda that, while he was head coach at the University of Texas, he learned that Curl had sexually abused one of his swimmers, Kelly Davis, over a number of years, leading her to develop an eating disorder and other emotional problems.  As opposed to helping Davis and/or taking steps to ensure that Curl would not molest others in the future, Schubert decided to push Davis off the team in the interest of the other girls. Schubert confided in Rianda that he informed USA Swimming’s Executive Director Chuck Wielgus about Curl on multiple occasions but no action was ever taken, allowing Curl unfettered access to children for years until Davis came forward in the summer of 2012.

Also besides the sexual misconduct by SH, what about the swimmers he promised spots on the team in Fullerton to after 2010 summer nationals? (I’m told he spoke one minute, then went dark the next) MS kicking a swimmer off the team for “the greater good” of the rest is an example that happens on many college teams unfortunately. There are many well respected coaches who have little to no interest in helping a swimmer who may be experiencing something outside of the pool. (Unless they offer something to them like records, Olympics, promotion, etc.)

The reoccurring theme in all of these stories is the obscene payoff and the carefully written and legally crafted Non-Disclosure Agreement. Curl used this tool; Schubert seems to have been the benefactor of this tool. Is this taught at USA Swimming? Perfect the disciplines of the four fundamental swim strokes as well as your basic and advanced settlement Non-Disclosure Agreement and you’re free to set up your very own swimming empire. To hell with ethics, scruples, morals and even the law if you have these basics down pat! It makes me sick to my stomach thinking just how many of these [email protected]&%* settlement NDA’s are in play covering for countless sexual predators and continuing to demoralize their victims. I am… Read more »

This article is sickening on two levels: a. That Schubert was completely willing to cover up Jewell’s behaviour because of their friendship. How many others has he covered up over the years? While at the same time betraying another friend, Rianda and creating turmoil in her life in many ways, just because she was trying to do the right thing, but against Schuber’s orders. b. What this article leaves out is the fact that USA Swimming also had a private investigator follow Hutchison along with a lengthy investigation and found no wrong doing. It is obvious that Jewell and Schubert went after Hutchison to leverage their own interests. This can be seen not only through Schubert’s actions, but also through… Read more »

Thats a lot of money to keep schubert quiet about Curl. Was that to protect Curl, or to protect USA Swimming for lying about what they knew about Curl. There are so many different branches to go down here. And I’m sure Allard will (and already has).

You are sadly misinformed because you are believing everything you read in the press. BS sells newspapers and gets free publicity…what part of that do Americans NOT understand. All of these allegations are fraudulent BS, period.