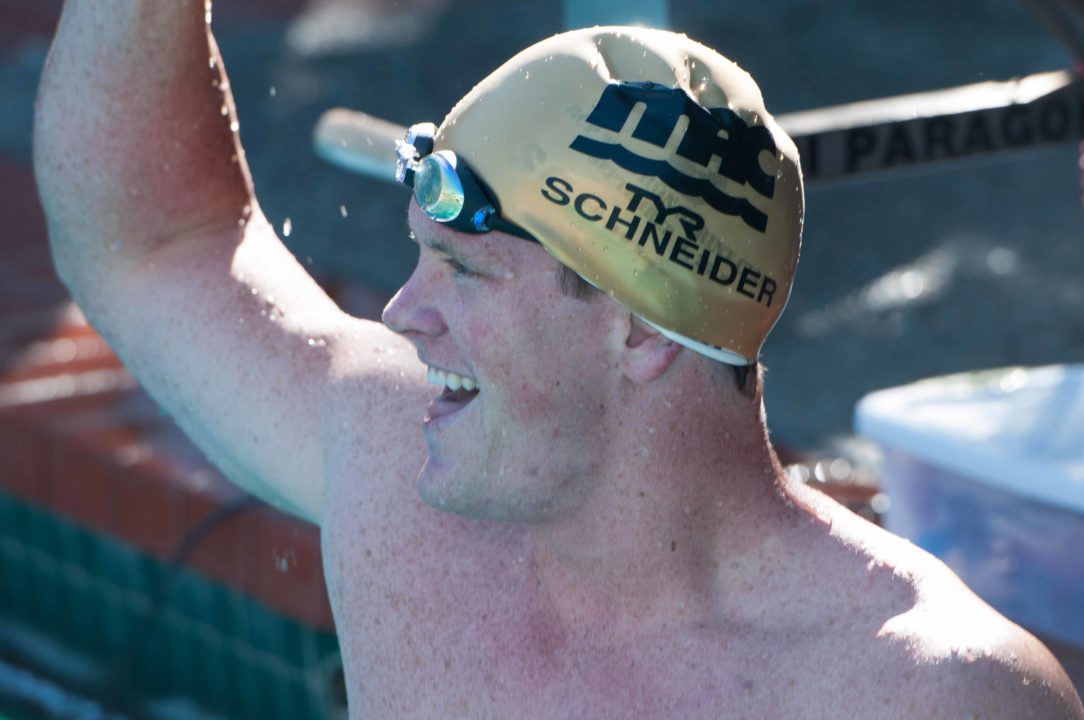 Josh Schneider knows how to get up and swim. He has mastered the art of the Tiburon Sprint Classic, and on Saturday took his second-straight win in the series in the two-lane pool in Tiburon, California, posting a 19.63 in the final to top George Bovell (19.74) for the victory and the $10,000 cash prize. On a turnaround of just about half-an-hour, that’s a pretty speedy time (he swam an earlier heat than Bovell, so got a few extra minutes of rest).

Schneider got off of the blocks very well, commanding a half-body-length lead as the two-headed for the turn. Bovell, though, got into and out of the wall to leave the pair dead-even coming home. Schneider, though, with a perfectly-timed final lunge, to take the victory.

Though Schneider earned the title and the prize money, Bovell still had the best time of the day with a pool record of 19.39 from the first round, where he easily bettered Spain’s Javier Noriega.

Anthony Ervin put up an outstanding 19.6 in the first heat, and was in position to final until Bovell’s amazing swim in the final heat.

Also in the prelims, despite being at the very beginning of the college season Cal’s Tom Shields swam a 20.4. That’s a personal best for the last-second fill-in for Ricky Berens, who got ill and had to pull out at the last-minute.

In the women’s race, Arianna Vanderpool-Wallace put up a 22.2 in the preliminary heats to earn the right to face Rowdy Gaines in the final of the Battle of the Sexes. She and Cal post-grad Liv Jensen (22.4) had the two fastest times of the preliminary rounds.

In that final, AVW hung with the legendary Gaines up until the turn, but Rowdy on fresh legs had a phenomenal breakout and pulled away to win 21.98-22.33.

Other results for the women include a tie in heat 3 from Dana Vollmer and Lara Jackson in 22.7, and Kara Lynn Joyce bested Emily Silver 23.0-23.5.

Gaines’ speed into his mid-50’s is amazing, and speaks to the level of training that he has maintained for so long. By comparison, in the legends race between Matt Biondi and Tom Jager, two swimmers 5 years Gaines’ junior, we saw only 23’s.

That race was another phenomenal finish, though. When these two were in their primes, Matt Biondi twice topped Tom Jager at the Olympics. Here in Tiburon, though, 20 years later, it was Jager who got the better of the pair with a 23.11 to Biondi’s 23.18.

Check out the event channel for all of the action, including the open water mile coverage which will begin at 8:55 Pacific time on Sunday. Also, check back shortly for video of the men’s 50 free final.

Rowdy Gaines could still beat Ryan Lochte in a 50m free swim-off, no doubts about that.

1. No denying Rowdy’s amazing swim…incredible really.
2. Times aside, great race between Jager/Biondi, who were both untrained and unshaved.
3. Biondi beating Jager at the Olympics doesn’t BEGIN to describe this classic rivalry. Perhaps the best way to appreciate it is to look at the 50M Free World Record progression, starting in 1985 when Tom went 22.40 to break Dano Halsall’s mark, and brought the record back to UCLA (Halsall had broken Robin Leamy’s mark of 22.54). Over the next six years, Jager and Biondi continually wrestled the record from each other, with Jager finally on top in 1990 at 21.81, a mark that stood for a decade until the great Popov broke through in… Read more »

oh, Arianna, how could you? To be fair, she’s a very polite young lady. Isn’t it a bit disrespectful to beat a 53-year old man?