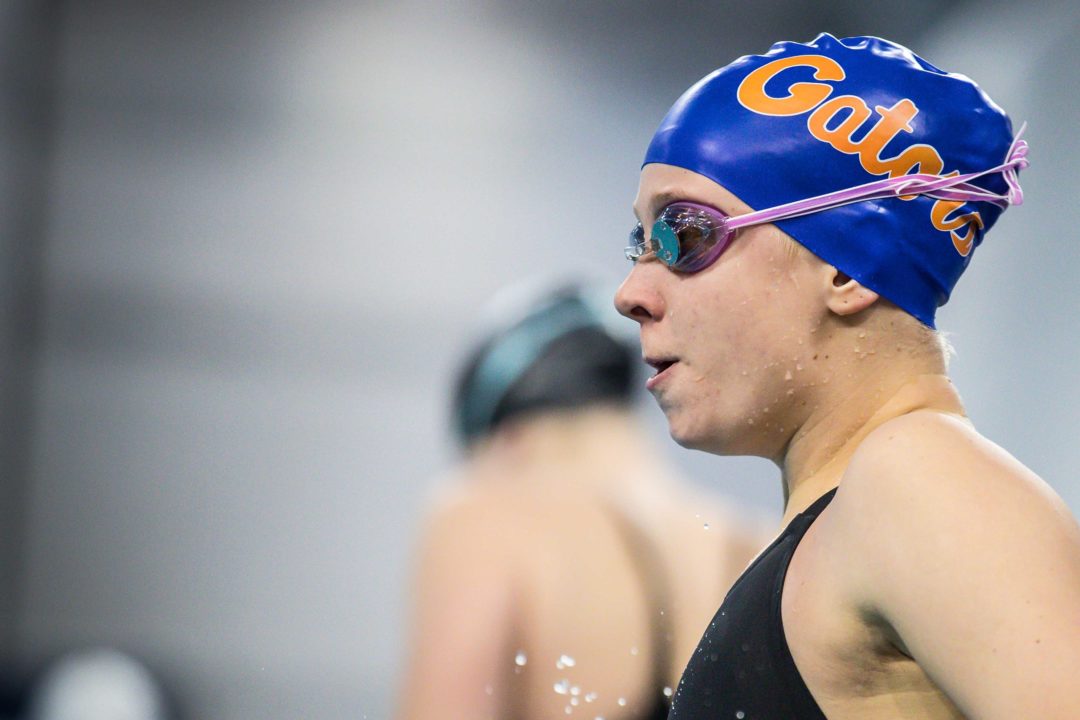 Florida senior Savanna Faulconer is one of many athletes facing tough decisions this spring. But the now-retired Gator has found some important perspective. Archive photo via Jack Spitser/Spitser Photography

For a wave of swimmers across the country, coronavirus cancellations and postponements are forcing tough decisions about the futures of their athletic careers.

We caught up with Florida senior Savanna Faulconer, who saw her career come to an abrupt and unexpected end this spring when the NCAA canceled its championships meet and the Olympics (and U.S. Olympic Trials) were pushed back a year.

Faulconer said she was doing homework when she first saw the news story that the ACC was pulling out of NCAAs due to the spread of the 2019 novel coronavirus.

“It was like ten minutes later the NCAA was canceled,” she said.

“It was so strange. It didn’t feel real for a long time. I went over to one of my friend’s houses and all the seniors were just so upset, crying. It was just a lot of unknown at the time.”

Faulconer eventually came to the decision that she’d stop competing this year, rather than spending another year chasing what she expected would be her last swim, at Olympic Trials. Faulconer was already planning to pursue a fifth year of undergraduate studies, adding an education minor to her microbiology major. She’d envisioned that fifth year as a chance to focus more on other areas of her life, including exploring options in either the job market or graduate studies.

The 21-year-old acknowledged the disappointment of missing out on the end of her senior season, but was quick to look on the bright side – without swimming, Faulconer says, she’s able to focus more on staying healthy, avoiding the virus and completing her classes through distance learning, rather than dealing with the stress of translating a training plan to the new life in quarantine.

Though the shock of the meet cancellations was overpowering at first, Faulconer has found important perspective:

“For me, swimming was never really about the end,” she said. “Looking back in a year or two years, I won’t think about how I didn’t get a last meet or a last big hurrah. It’s about the people you were with and the experiences that you made with your teammates. As a whole, swimming’s not about that last moment… it’s about what you did to get there.”

“For me, making NCAAs four years in a row and getting the opportunity to be there with my team was something that I’ll cherish more than getting that last swim.”

Well said. Glad she has come to that perspective so quickly! Wishing her all the best in studies and next chapter in life.

USA Swimming should plan to acknowledge athletes like this during the 2021 Trials. They should still appear in the psych sheets and receive the same credentials and swag as athletes competing if they choose to attend as a fan.

62
-7
Reply
A CAR
Reply to  Swamajamadingdong

I think this is a good idea actually. On my colleges transcripts there will be an asterisk indicating covid19. Athletes who planned to compete at the 2020 trials should get at least the bag tag proving so. Maybe they should have a “senior day” recognition of all of them.

Agreed that this is a fantastic perspective, I share in her sentiment. No, there shouldn’t be recognition at Olympic Trials if you don’t compete in Olympic Trials. The swimmers at Olympic Trials should be recognized. Adversity, inconvenience, and uncertainty is all the more reason to celebrate those competing at Trials. Not for those who do not compete. Participation trophy sentiment is garbage, least of all at the Olympic Trials. Having an opportunity at Trials for athletes who DID endure and are competing to represent their country, that’s a good message. Celebrating those unwilling or unable to compete is a trash concept and places the focus in diametric opposition of the appropriate group – those vying to represent Team USA. Get… Read more »

So the Seniors, who do not get an extra year of eligibility, should join a club team, get back in the water when possible and train on their own dime? Totally impractical! This has nothing to do with endurance or quitting. For the vast majority, totally impossible

If you’re suggesting that the seniors that happened to have Trials timed right after their senior year have been dealt an unfair hand because they now have the opportunity to train for an additional year to get to compete in the biggest meet in the world, I would suggest your mindset needs rewiring.

Train where? They cannot swim for their University. Winter sports were not given an extra year of eligibility. I would suggest you read before you write such crap.

LOL! Olympic Trials stopped being a meet only for people trying to represent Team USA in 1996. Generally it has become one big participation trophy anyway, so your argument is baseless. For people like this swimmer that’s realize that they want to move on with their life, a one year delay is career-ending. They achieve their goal by qualifying for the meet, they earned the right. The alternative is that they enter and swim slow because they have been working in the real world for a year, or enter and just let their lane go empty.

Congratulations and continued best wishes ! They can never take away that you were among the elite by making USA Olympic qualifying standard(s). Side note: Back in 1992 ,knew a terrific young lady who bypassed the trials to begin her Medical school studies immediately. No regrets !