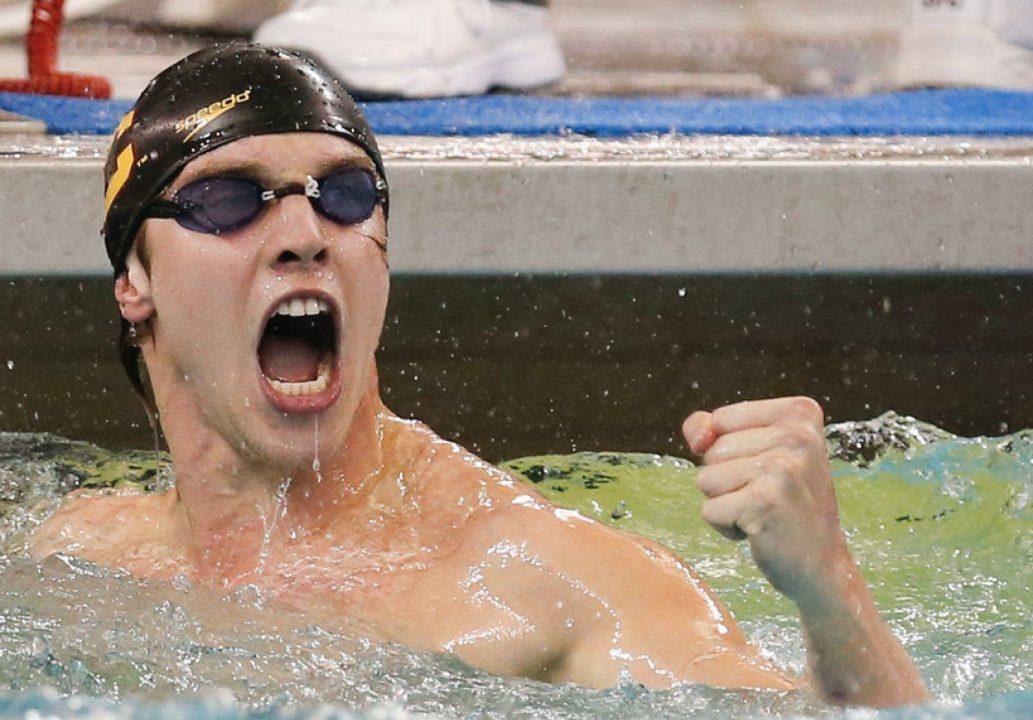 Notably, Condorelli's best time of 47.88 is already faster than Dotto's Italian Record of 47.96, so this is a big boost for the Italians and makes them a much bigger threat for the relay podium in 2020. Archive photo via Tim Binning/TheSwimPictures.com

Olympic sprinter Santo Condorelli has officially begun the process of switching to Italian sporting citizenship, his father told SwimSwam on Friday. Though he formerly represented Canada internationally and was a member of the USA Swimming National Junior Team, Condorelli has Italian ancestry on his father Joseph’s side, as that side of the family is from Sicily.

To establish his change of affiliation, Condorelli will need to reside in Italy for 12 months before his first official representation. He’s already had the required year-long break since he last represented Canada since his last time representing them was in Rio.

“GR 2.6 Any competitor or competition official changing his affiliation from one national governing body to another must have resided in the territory of and been under the jurisdiction of the latter for at least twelve months prior to his first representation for the country.”

He first declared his intent to represent Canada internationally when he appeared on the psych sheets at the 2015 World Championship Trials.

With the switch to Italy, Condorelli should play a major role on the relays. The Italians already have a very talented squad with sprinters like Luca Dotto, who became the first Italian man ever to break 48 in 2016. Notably, Condorelli’s best time of 47.88 is already faster than Dotto’s Italian Record of 47.96, so this is a big boost for the Italians and makes them a much bigger threat for the relay podium in 2020. Condorelli is now training under Claudio Rossetto, who also coaches national teamers Dotto and Ivano Vendrame.

So far, Italy’s only Olympic relay medal was the 800 free relay bronze in 2004, but that could change with Condorelli on the roster. The Italians have also been more competitive in recent years, earning a bronze in the 200 free relay at the 2015 World Championships.

WHAT?!?! Had the best NCAA season he’s ever had recently. 47 again this year?

What country do you guys think he will represent after 2020? I think that with the rising talent coming up in Hungry, that might be a great fit after!

I predict he will try to represent another planet

He was born in Japan. He can represent them and break some Asian records.😉

I sense the beginnings of a meme I this comment…

Note to SNC: Are you enjoying this? Who’s your next import for the 2020 Trials?

Italian 4×100 just got really tasty with the youngsters they’re bringing through.

Possibly a prospect in the 4×200? Conderelli could move up to the 200, while paltinieri and detti could move down.

They will get fourth in Tokyo

Hurts for Canada, but our relay outlook is bleak. He would struggle to make a US individual 100 free so this makes sense for relays and individual

when was the last time canada finaled in a male relay at the olympic level? ’08?

Condorelli is not our answer to that problem, the problem is more systemic than that. he made the right move for both countries I think.

meh… did we really want him anyways? Putting the middle finger up before a race and training with Russians is not something Canada wants to be affiliated with….

True that his 100 free best time is faster than Dotto’s NR, but an individual spot for the WCs and the Olympics is not a given. Young lions are coming up through the ranks. Miressi has already been 48.3 in the 100 free and he is 19. Vergani clocked 21.7 in the 50 and he is 20. And there are others.

Condorelli plans to transfer to IU, then ASU.

and swim under the name of Jack Condorelli…

Why doesn’t take the money and become citizen of Bahrain. Then he also has a better chance of making Olympic team.