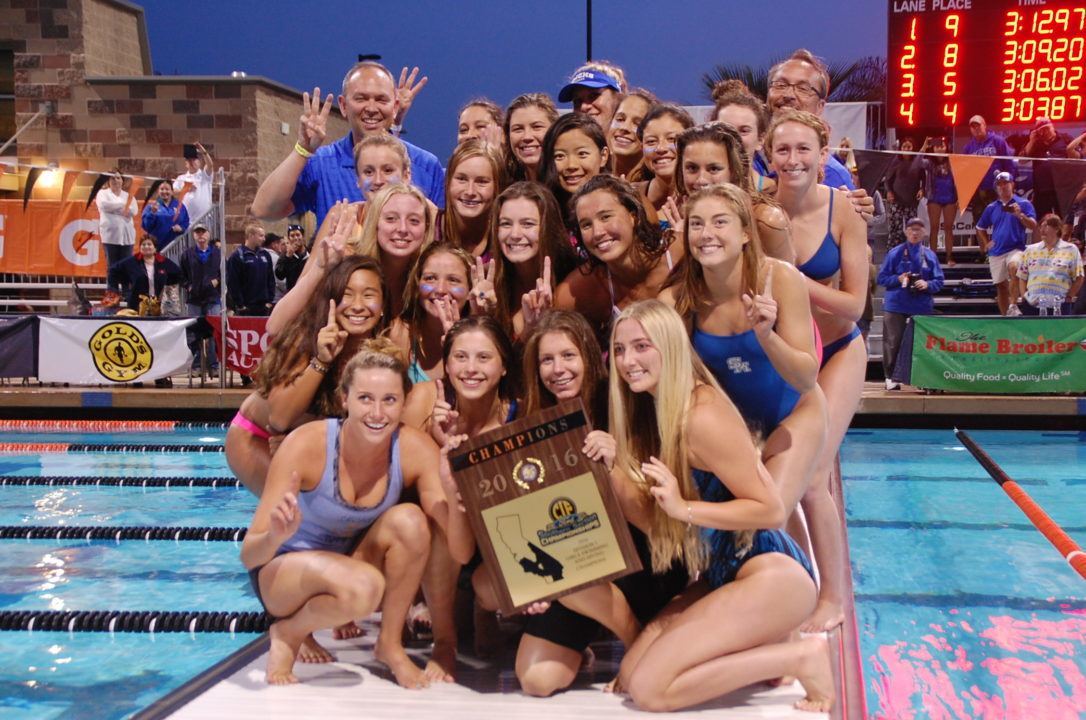 The National Interscholastic Swim Coaches Association (NISCA) has announced the results of its May Madness Tournament. There were a total of 126 girls teams entered into the tournament to determine the All-Time National Dual Meet Champion.

According to NISCA, the tournament is intended to create a fun activity in light of the coronavirus pandemic, especially since swim meets around the country have been canceled.

In order to enter, teams had to fill out a form and include their top times all-time for their entries. Each swimmer was allowed to “swim” up to two individual events and two relays like they would in a traditional high school dual meet. Real times from verified high school competition had to be used for entries.

Once the field was narrowed down to 64 schools, the regional finals were completed. Teams that made it to the top four in their region include:

Some of the highlights of the Final Four included:

Harpeth Hall, located in Nashville, Tennessee has been one of the nation’s leading high school swim programs over the past couple of years. The leading names on this team are sister US National Teamers Gretchen and Alex Walsh. Alex, a Pan American Games Champion, formerly held the National High School Record in the 100 backstroke before Stone Ridge’s Phoebe Bacon broke it in January. Gretchen, a World Junior Championships gold medalist, currently holds the National High School Records in the 50 and 100 freestyle after shattering American record holder Abbey Weitzeil’s marks.

Nelson and Eskew are both currently on the roster at Virginia, while both Walsh sisters are committed to swim there; Alex in 2020 and Gretchen in 2021.

While the program has recently come back on the radar thanks to the Walsh sisters, also making the lineup for Harpeth Hall is one of the true legends of American swimming: Tracy Caulkins. She’s the school’s top entry in the 200 free (1:48.80) and 3rd entry in the 500 free (4:48.96), but could have filled in a lot of gaps. Caulkins, who won 3 Olympic gold medals in 1984 including the 200 IM and 400 IM individually, broke 5 World Records and 63 American Records in her swimming career, and is one of the most versatile swimmers ever, having broken American Records in all 4 strokes and the IM races. At 15, while still at Harpeth Hall, she won 5 World Championship gold medals (and a silver) at the 1978 meet in Berlin and was already one of the world’s best swimmers.

The biggest name to appear on the Fossil Ridge roster is Zoe Bartel, who was the #3 recruit in the class of 2018. During her time at Fossil Ridge, she set a state record in the 100 breaststroke with a time of 1:00.22 and was on the 200 medley relay alongside Bayley Stewart, Colleen Gillian, and Kaylee Alons that set the national high school record on the event.

Gillian had the fastest 100 butterfly nationwide in 2018 and was named the #5 recruit in SwimSwam’s class of 2019. Stewart was a former relay NAG record holder and won the Colorado state title in the 100 backstroke in 2017 with a time of 53.94. Alons swam alongside Stewart and was a member of the same NAG breaking relay.

More recently, Colleen Gillian’s younger sister Renee has led Fossil Ridge to a few state titles, including her own in the 100 butterfly in February.

Out of all of the schools mentioned, Baylor School probably has the richest swimming history. The girl’s program has produced 16 Tennessee state championships, spanning from 1990 to 2020.

Kristen Vredeveld is most notable due to her performances swimming at Cal, but in high school she proved a dominant force for Baylor, holding the NAG in the 50 freestyle and winning multiple Tennessee state titles. In the class of 2013, she was ranked 3rd in SwimSwam’s rankings only behind Olympians Missy Franklin and Lia Neal.

Her teammate Kimberlee John-Williams, who swam collegiately for Georgia is also a notable name to come out of this program. Williams, a native of Peru, was a member of the nation’s world junior championship team in 2015. In 2011, she won the state titles in the 100 fly and 100 backstroke.

Addison Smith, a member of the class of 2019, was a valuable distance swimmer during her time with the program, winning the Tennessee state title in the 500 freestyle and finishing second in the 200 freestyle during her senior season.

Currently leading Baylor is rising senior Ellie Waldrep, who won the Tennessee state title in the 100 fly this past season. She is ranked #19 in SwimSwam’s rankings for the class of 2021.

The Baylor School is the only team to put both their boys’ and girls’ programs into the final four of the tournament.

This program, located in Rancho Santa Margarita, California has given rise to several high school stars.

World championship bronze medalist Katie McLaughlin was a multiple-time state champion when she swam for the program and she formerly held the National high school record in the 100 fly, which was recently broken by Torri Huske.

Class of 2020 honorable mention recruit and Indiana commit Ella Ristic is another notable name to swim here. Swimming for Santa Margarita, she won 3 California state titles in the 500 free, 200 free, and 100 free. Ristic was also a member of the 2017 World Junior Championship squad for the United States.

Like Ristic, Samantha Shelton was also ranked coming out of high school being named the #15 swimmer in the class of 2018. Shelton was a 4-time CIF Southern Section (D1) champion, winning events across multiple strokes. She represented the US at the 2015 World Junior Championships in Singapore.

Should be noted the disparity involved comparing private vs public schools and the inherent disadvantage for public schools, being required to operate under boundary restrictions

And yet again no Carmel high school?

Schools had to enter to be considered, that’s probably the same case with Bolles on the boys side.

The thing with Swimming is that there is a national organization around the sport, with clubs and championships, etc. Football most notably in HS sports has no national organization or club schedule, so HS is the pinnacle of the sport. All the resources for football are at the HS. Top players develop ONLY within this framework. Somewhat the same in basketball and track, though there are AAU leagues and USATF. Much less in tennis, soccer, and volleyball.

Swimming is barely supported in many areas for many reasons: its structure is different than other hs sports, offered in fewer HS because of a lack of pools, and a long tradition of football being preeminent. 99% of hs swim coaches are… Read more »

Much closer than the boys! I’d love to be able to see I meet like this!

Regarding Fossil Ridge in CO: the times on the entries were from races at 4995’ altitude (obviously, same with the boys’ meets). The 500 and 200 free times can probably be converted to faster times. Also, FWIW, the pool used at the 2018 meet was 5.5’ at its deepest, and 4.75’ at its shallowest, with narrow lanes.

And two of their team on the way too early 2022 top twenty rankings, so should do nothing but improve that team over the next two years.