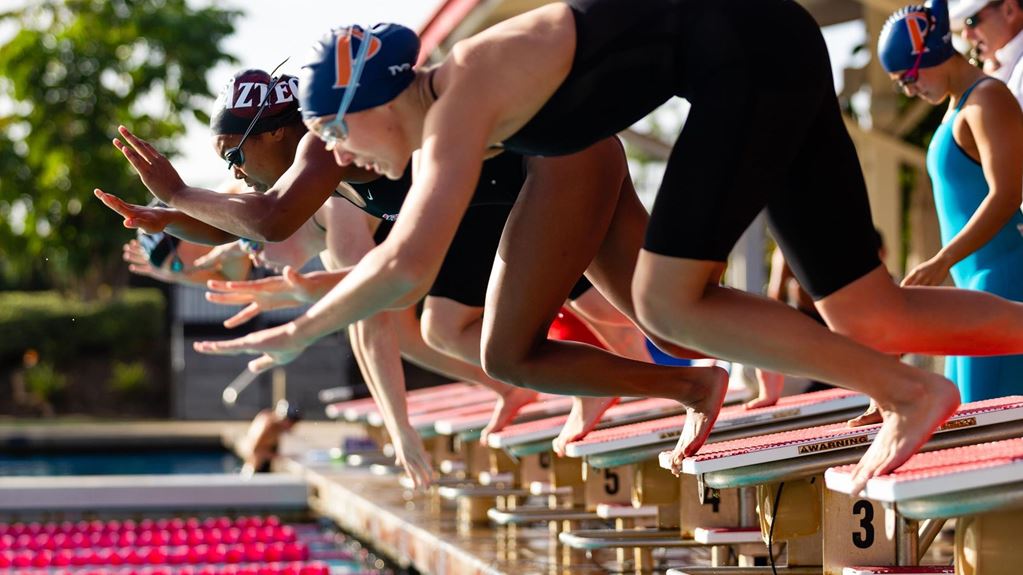 San Diego State had the best time in five of the six swimming events and swept the one-meter diving competition in a 66-60 win over Pepperdine on Thursday. Current photo via Derrick Tuskan/San Diego State Athletics

MALIBU, Calif. – The Aztec swim and dive team beat Pepperdine 66-60 in a dual meet at the Raleigh Runnels Memorial Pool Thursday morning. SDSU had the best time in five of the six swimming events and swept the one-meter diving competition. The Aztecs improved to 5-0 in dual meets on the year.

The Aztecs posted the top six scores in their first diving competition and were led by Delaney Gallagher‘s 291.60 points. She was followed by Marie Yacopino (268.70) and Ximenia Lechuga Gonzalez (260.30).

SDSU had the fastest time in both relays. They opened the swimming portion of the meet with the team of Elli Ferrin, Morganne McKennan, Klara Thormalm and Sammy Geyer finishing in 1:46.82 in the 200-yard medley relay. The Aztecs closed the meet with a time of 1:38.74 in the 200-yard freestyle relay. That squad consisted of Peyton Wilson, Evonne Stehr, Sammy Geyer and Lizzie Menzmer.

Klara Thormalm had the top time in the 50-yard backstroke, hitting the wall in 26.78.

SDSU had the top two times in the 50-yard breaststroke with Sammy Geyer hitting the wall in 30.13 and was followed by Elli Ferrin‘s 30.93.

Alma Thormalm and Lizzie Menzmer recorded the two fastest time in the 50-yard freestyle. Thormalm finished in 24.15 and Menzmer in 24.67.

The lone event where Pepperdine had the fastest time was the 50-yard butterfly. Lizzie Menzmer (26.94) finished second and Mia Ryan (27.18) took third in that event.

UP NEXT
The Aztecs head to Fresno State for the Chick-Fil-A Invitational. There will be three sessions, two Friday (11 a.m. & 6 p.m.) and one Saturday (10 a.m.)

MALIBU, Calif. – The Pepperdine women’s swim and dive team hosted San Diego State today for its home opener at Raleigh Runnels Memorial Pool. The meet was highlighted by a win from freshman Sarah Hamilton in the 50 butterfly.

It was a very close meet, but the Waves ultimately fell to the Aztecs 66-60.

After the diving concluded, the meet moved straight into the swim portion, beginning with the 200 medley relay. The team of Emily Morton (Golden, Colo./Lakewood HS), Anna Riekhof (Parkville, MO./Park Hill South HS), Sarah Hamilton (Concord, Calif./Carondelet HS) and Sammie Slater (Sonora, Calif./Sonora HS) had the best finish for the Waves, combining for a 1:51.62. The next event scheduled was the 50 butterfly, where Hamilton had her big win on the day coming in first place with a time of 26.53.

The 50 back was next up, where freshman Caroline Eckel (Livermore, Calif/Granada HS) took second place in the event with a 27.57 showing. Freshman Jasmine Williams (Folsom, Calif./Folsom HS) was right behind her in third with a time of 27.65.

Morton had a third-place finish, in the 50 breast, swimming a 31.14, followed closely by Olivia Kayye (Chapel Hill, NC./East Chapel Hill HS) in fourth, with a 31.32. Freshman Alison Cho (Valencia, Calif./Valencia HS) had the Waves’ best time in the 50 freestyle, with a time of 25.31 followed by Nohea Lileikis (Honolulu, Hawai’i/Punahou School) with a 25.56.

Jenna Sanchez (Highland, Calif./ Redlands East HS), Amy Griffin (Seal Beach, Calif/Los Alamitos HS), Lileikis and Williams teamed up in the 200 free relay for a first place finish, combining for a 1:40.46 in the final event of the day.

QUOTABLE
“I think today was really good” said Head Coach Joe Spahn “our girls got up and raced a tough team in San Diego State. It was great to see Sarah Hamilton win the 50 butterfly. Overall, I thought all of our racing was really good. We’re going to use this speed me to roll into the Malibu Invite which has some more traditional events, but this was a good way to get ourselves off the blocks and start racing.”

NEXT UP
The Waves will be back in action tomorrow and Saturday, October 11-12 for the annual Malibu Invite. The meet will be back in Raleigh Runnels Memorial Pool, with the first session on Friday starting at 9 a.m.