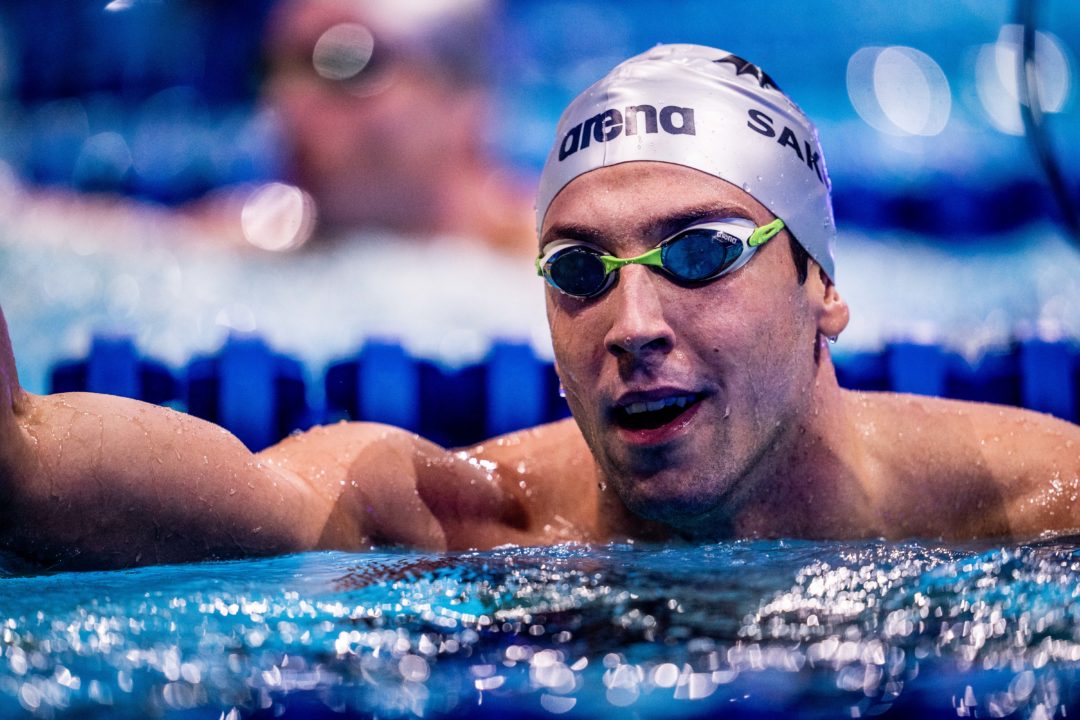 In match 7 Energy Standard, Team Iron, DC Trident, and the Toronto Titans will face off. DC Trident must place 3rd to have a chance at making the semifinals. Current photo via Mine Kasapoglu

Sarah Sjostrom, who sat out match 6 due to a slight back injury, is back in the game for Energy Standard in this match. But she will not race in the 100 fly, where Madeline Banic and Anastasiya Shkurdai will represent ENS. Instead, Sjostrom will take on Iron’s Ranomi Kromowidjojo in the 50 free.

Max Litchfield (ENS) also did not compete in match 6 due to “undisclosed illness.” He is out for match 7 as well.

In the women’s 200 back, Energy Standard switched out Mary-Sophie Harvey with Zsuzsanna Jakabos to race alongside Emily Seebohm. Out of match 7 swimmers, Toronto’s Lisa Bratton has swam the fastest time in this event so far this season, with DC Trident’s Amy Bilquist close behind. This may be an area for those teams to snag points away from Energy Standard.

This also means that Harvey will be fresh for her 1st race of the day, the 200IM. Unsurprisingly the 200IM world record-holder Katinka Hosszu will rep team Iron. Toronto’s IM team of Tessa Cieplucha and Kelsey Wog are also entered.

Ilya Shymanovich (ENS) is not in the 200 breast. Instead, Max Stupin will race alongside teammate Andrius Sidlauskas against DCT Ian Finnerty and Thomas Cope. As expected, Toronto’s top 200 breaststrokers Anton McKee and Erik Persson, who hold the 2nd and 3rd fastest times of the season, are entered as well.

The men’s 50 breast is stacked, including Shymanovich, who holds the 2nd fastest time in the event so far this season. Finnerty and Cope (DCT) will go up against him alongside the current fastest 50 breaststroker this season, Emre Sakci (IRO). McKee and Persson will race again for Toronto.

Benedetta Pilato will race the 50 breast for Energy Standard. The only other swimmer entered in the event who has swam a top-five time this season is Iron’s Ida Hulkko.

The women’s 50 back is filled to the brim with competition. The highest ranked match 7 swimmers in the event so far this season are Kylie Masse (TOR) and Linnea Mack (DCT.)

On the women’s side, Toronto and Energy Standard are the top teams in the 400 medley relay with Toronto’s fastest time (3:48.50) only .30 faster than Energy Standard. From match 6, Toronto has kept their relay teams the same while Energy Standard switched out Sjostrom for Femke Heemskerk on the anchor leg.

For the men, Energy Standard’s fastest 400 medley time so far (3:20.68) is nearly 4 seconds faster than the next fastest team in the match, Toronto Titans. From match 6 Toronto also kept their fastest relay the same: Evgeny Rylov, Shymanovich, Chad le Clos, and Florent Manaudou.  Energy Standard has switched Matt Grevers from the backstroke leg to the butterfly, having Kliment Kolesnikov lead off.

Swimmers Out By Team:

Blume and Kisil are still on relays.