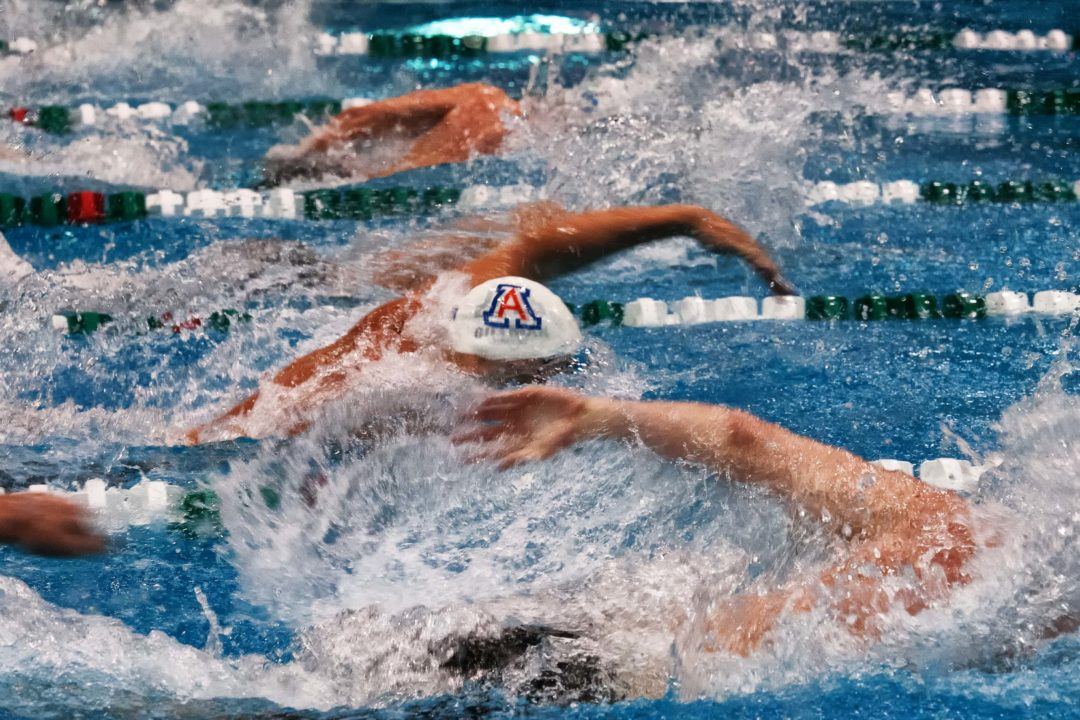 Ryan Perham of Grapevine, Texas has made a verbal commitment to swim at the University of Arizona in the class of 2024. His mother swam at UA from 1988-1992. Stock photo via Mike Lewis/Ola Vista Photography

54/2:02 breaststroker Bailey De Luise has committed to swim at Georgetown University in the class of 2026.

Ryan Perham of Grapevine, Texas has made a verbal commitment to swim at the University of Arizona in the class of 2024. He will suit up with fellow commits Jake Hand and Mateja Milovanovic in the fall of 2020.

“Thank you to my parents and coaches for their support in this journey. I look forward to swimming for Coach Busch and the whole staff and am excited to join the Wildcat family.”

A senior at Southlake Carroll High School, Perham is a water polo convert and has only been swimming full-time since May 2019. He trains under Kevin Murphy and Dan Balint at North Texas Nadadores and specializes in sprint free and butterfly. Perham’s mother, the former Crissy Ahmann-Leighton, swam for the Wildcats from 1988 to 1992. She won back-to-back NCAA titles in the 100 butterfly in 1991 and 1992. At the 1992 Olympic Games in Barcelona, Ahmann-Leighton earned a silver medal in the 100 fly (58.74) and a pair of golds as a member of Team USA’s 4×100 medley and 4×100 free relays.

Perham’s story is reminiscent of that of Nate Biondi, a water polo player who became a sprinter and went to his Olympian father’s alma mater (Cal). Now in his junior season, Biondi has become one of Cal’s top sprint freestylers. Pelham will join an Arizona sprint group that includes Marin Ercegovic, Noah Reid, Tai Combs, Aldan Johnston, Colin Gwiazdowski, Jack Anderson, Daniel Namir, Ty Wells, and Ty Coen. Jorge Iga, currently a senior, and Reid were B-finalists in the 50 free at Pac-12s last season, while then-freshmen Ercegovic and Combs scored in the C final. Iga placed 8th in the 100 free; Ercegovic and Reid made the B final; Johnston and Namir picked up points in the C final. In the 100 fly, the Wildcats had two A-finalists (Chatham Dobbs, who was a senior, and Reid), one B-finalist (Mathias Oh, a senior), and two C-finalists (Coen and Gwiazdowski, who exhibitioned).

Bear Down! The sprinter legacy continues!