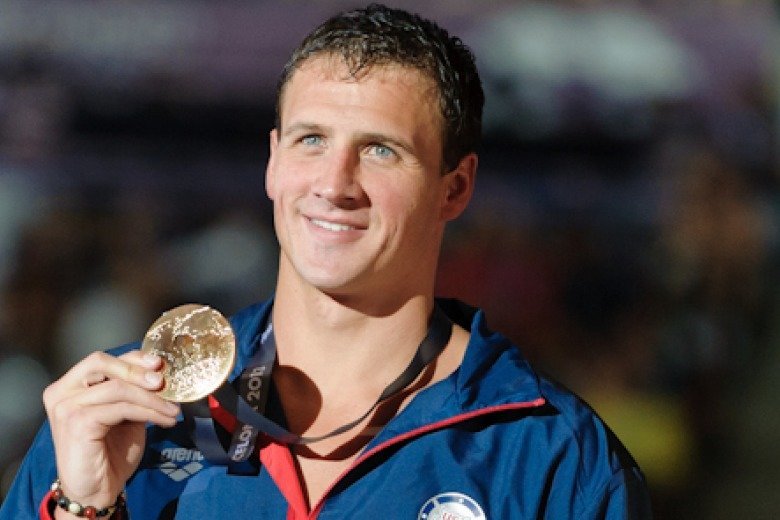 In this weekend’s episode of 'In Depth with Graham Bensinger,' Ryan Lochte admitted that the gold medal he won in the 200 back in Beijing is missing. Archive photo via Victor Puig

In this weekend’s episode of In Depth with Graham Bensinger, Ryan Lochte admitted that the gold medal he won in the 200 backstroke at the 2008 Olympic Games in Beijing is missing.

Lochte gave Bensinger a tour of his Gainesville, Florida home, where they looked through his Olympic gold medals. As he explained how he won each medal, he said that he had no idea where the 2008 gold was. “There is actually one missing, in 2008,” Lochte said. “And it is the gold. The 200 backstroke one. I don’t know where it is.” Later he added “I have a couple guesses.” When pressed by Bensinger, Lochte suggested it might have been taken by either his former agent or his mother. “Those are my guesses. They said they don’t have it but they have to. Those are the only two places [it] could have been.”

The home tour continued into his son Caiden’s room, where there is a framed cap that Pablo Morales signed and gave to Lochte in 1992. “This cap is basically where I wanted to become an Olympian and represent USA at the Olympics,” he reminisced. “I remember seeing him win and congratulating all the other swimmers… really good sportsmanship… and then walking along the pool deck and signing people’s caps and taking pictures. That is a hero. That is amazing. I was like, ‘I want to be just like him.’”

During the course of the full interview, in which he addressed topics such as being misled by Alex Rodriguez’s CNBC show ‘Back in the Game,’ the demise of his relationship with his mother, and other intimate details of his life, Lochte talked about his relationship with Michael Phelps. He contends that they enjoyed racing against each other and that the two competitors made each other better. He also talks about how much he likes Phelps today. “He likes to help now. He’s giving out pointers. He wants to be a role model for everyone.”

Lochte talked about his children, Caiden and Liv (“we call her Sissy”) and about teaching Kaden to swim.

Finally, he talked about his goals for Tokyo. “I feel like I have more to prove and more things to overcome than ever before.”

Doesn’t have a relationship with her, mentioned about halfway through the article

People forget that she was the one who said he got robbed, he never told media that. I’d be pissed at her too

He says it’s because she said some nasty stuff when he told her he was having a kid. There’s definitely some juicy tea we aren’t hearing…

And have no business hearing.

But why did he tell her he’d been robbed if he wasn’t?

He was extorted so it is easy to see how he would describe that as being robbed. I’m not sure the difference would be obvious when in a foreign country and drunk.

We don’t know what he told her, but someone pulled a gun on him demanding money, that’s pretty close to “robbery.” Add in the stress of the situation, language barrier, and intoxication, it’s not very hard to believe that he felt like he was being robbed.

As long as she’s still breathing he can ask the question.

Ryan – Through the ups and downs of life traversed, you have two precious gifts from God in your children. While I prefer to remain anonymous, I know you and have shared many great moments with you as a competitor and adversary of sorts. Very sad to hear you are missing one gold medal – but as time passes the value to you will fade. Sorry also to read of your hiatus relationship with your Mother – I am pulling for healing and a renewed relationship filled with grace. You have always been and continue to be your own man. Your growth emotionally and spiritually will make you even more special than you are today. You are an amazing, gifted… Read more »

Michael Andrew would be my guess

Edit: hmm nah, probably someone older. I just got a religious tone off this

That you interpret a religious tone is understandable but that was not intended. Many people equate being religious with being spiritual, a mistake I made through most of my days. It is clear to me that one can be spiritual while not being religious. (One can be both as well.)
It this instance of dialogue, it is my intent to support Ryan and his family with spiritual gifts such as love, kindness, acceptance and positive support for his future.

Wish he could catch a break, obviously been through a lot. At the end of the day, he’s a true champion and nothing can take that away from him. Glad he’s excited for Tokyo, and it’s cool to see how glad he is to have a family of his own.

Damn, I hope he can get it back or maybe get a replacement.

Ryan have you checked your man cave ?
Or the undies drawer?
Have your Children have it in their rooms ?
🤷‍♂️🤔😂

None of that was funny boss

He actually got Coach Troy to talk and answer questions. I’m impressed. He nearly threw the NBC documentary crew off the pool deck.
https://youtu.be/r0S07MIyOgU