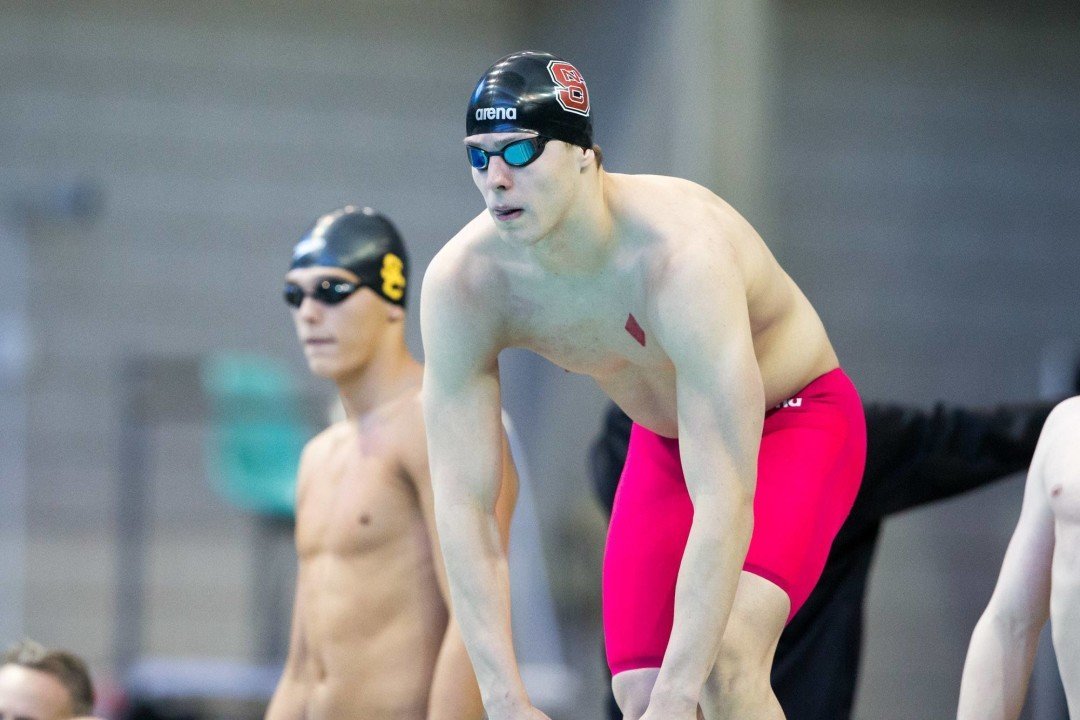 Held was the only man under 20 seconds today, clocking a 19.46 victory ahead of Wisconsin's Cannon Clifton (20.26). Archive photo via Tim Binning/TheSwimPictures.com

The dual meet between NC State and Wisconsin is underway, with the Wolfpack men and women leading the Badgers through day 1.

On the men’s side, Olympic gold medalist Ryan Held won his only individual event of the day, tearing through the water in the 50 free. Held was the only man under 20 seconds today, clocking a 19.46 victory for the Wolfpack ahead of Wisconsin’s Cannon Clifton (20.26).

Backstroke studs Andreas Schiellerup and Hennessey Stuart were neck-and-neck from start to finish in the 100 backstroke. Schiellerup was slightly faster on the 2nd 50, edging out Stuart with his 47.92 to Stuart’s 48.13.

Moore returned to the pool for the 200 fly, where she picked up her 2nd win of the day. Despite a late charge from Wisconsin’s Grace Wold and Dana Grindall, Moore held on for the win in 2:01.09.

Sophomore transfer Elise Haan impressed for the Wolfpack women in the 100 back. Haan out-touched All-American teammate Alexia Zevnik by just a hundredth, taking the win in 53.53 to Zevnik’s 53.54. Zevnik was also an event winner earlier in the session with her 2:00.27 in the 200 IM.

Wisconsin senior Chase Kinney pulled in a win for the Badgers in the 50 free. Kinney posted the only sub-23 time of the field to win the race in 22.82. A couple tenths behind her was NC State freshman Ky-Lee Perry in 23.01.

Press releases will be added when they become available.

Ipsen threw down 14:57 in the mile… Gary Taylor is doing his magic in Raleigh!

Was going to say, no mention about that sub 15 time here. Darn good for this time of year or anytime for that matter.

Did the Wolfpack freshmen men even swim?

I just noticed that as well! No freshmen on the men’s side tonight. Hmm…

Heard it was a suspension issue

Or maybe they just don’t need them…

They’ll have their time in the sun, Ress didn’t really pop until Conference last year.

Is Soeren related to Roald, perchance?

Dang. Billis wasn’t much better than that, with one of their freestyles their medley looking strong

Yeah that is close to as impressive as the 19.4

Cue the “NC State resting their swimmers early” comments. No way, they put in work day after day and definitely don’t look rested. This is what we should expect from them! Ipsen’s 14:57 and Hannah Moore’s 16:00 are both huge as well. The State women starting to build up to levels close to their men!

Was he in brief or jammer?