Rutgers Breaks 3 Pool Records from the 1983 NCAA Champs, But Falls to Nebraska 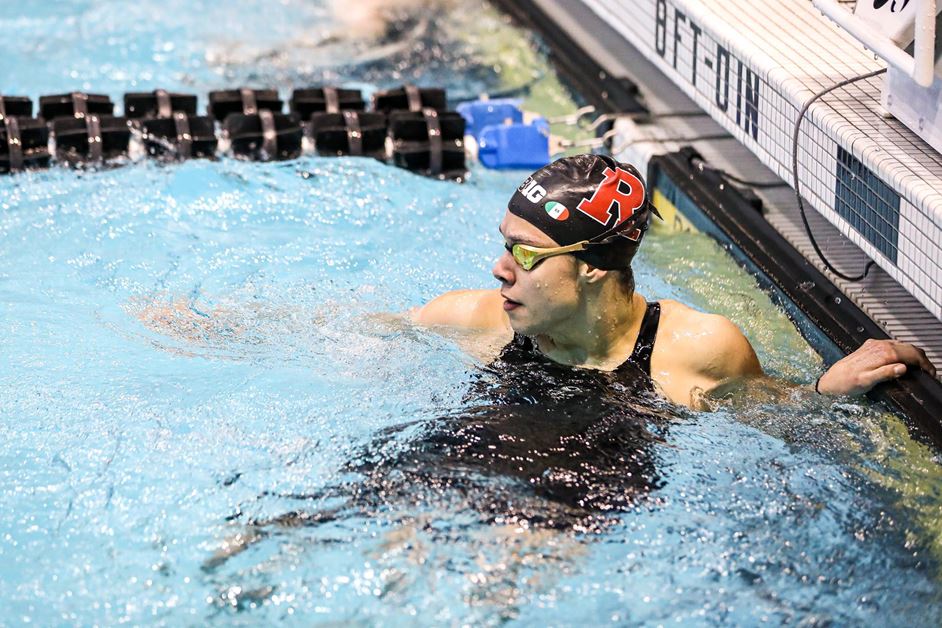 Despite the lopsided final team score, Rutgers showed out in the relays, breaking a trio of pool records, all of which were from the 1983 NCAA Championships. Stock photo via David C. Harmantas

Nebraska hosted Rutgers for a Big Ten women’s dual meet over the weekend, with the hosting Huskers fending off the Scarlet Knights 210-143.

Despite the fairly lopsided final team score, Rutgers showed up in a big way in the relays, breaking a trio of pool records, all three of which were set during the 1983 NCAA Championships. The action kicked off on Friday with the 200 medley relay, where Rutgers’ Alice Scarabelli (25.79), Tina Celik (28.42), Beatriz Zoppei dos Santos (25.32), and Sofia Chichaikina (22.47) teamed up for a 1:42.00, marking both a season best and new pool record. Nebraska came in a close second in 1:42.32, thanks in large part to a 24.36 fly split from Alexa Kucera.

The Scarlet Knights closed out the meet with a decisive victory in the 400 free relay, again downing the pool record. Lobova led the team off in 50.93, with Ghidini going 2nd in 50.57, Chichaikina split a huge 49.25 on the 3rd leg, and Eleonora Trentin anchored in 50.28. Their time of 3:21.03 downed the previous pool record by 3 seconds.

In the 100 free, the roles were reversed. Sofia Chichaikina got the touch, narrowly beating Haebig, 50.02 to 50.05. Unfortunately, the splits aren’t available for that race, so we can’t analyze it any further. Chichaikina also won the 50 free on saturday, touching in 23.19 to win by 0.51 seconds.

Chichaikina also won a barnburner in the 200 fly, holding off Nebraska’s Shannon Stott and Margaret Berning. Chichaikina used her superior speed to get out to the early lead, splitting 56.78 on the first 100, compared to 57.20 from Stott, and 57.96 from Berning. Stott made up about 3-tenths of a second on Chichaikina on the 3rd 50, only out-split her by 0.08 seconds on the final 50, ultimately finishing 0.02 seconds behind Chichaikina. Rutgers picked up the win with Chichaikina swimming a 1:59.03, Stott took 2nd in 1:59.05, and Berning came in 3rd with a 2:00.18.

Nebraska added five titles in the second session on Saturday to end the dual season with a 210-143 victory over Rutgers.

“What a great couple of days,” Nebraska head coach Pablo Morales said. “It was the perfect challenge for us going into Big Tens and our girls responded and competed really well. Rutgers has a great diving program including a former Husker coach and diver so it was great having them back in Nebraska. They brought a great level of competition for our divers.”

Sophomore Ella Stein led a Huskers sweep in the 100 breaststroke by swimming a season-best time of 1:02.72 to win the event. A trio of NU freshman completed the sweep, with Sydney McCracken taking second with a 1:02.96, JoJo Randby placing third with a 1:03.22 and Maia Hall taking fourth with a 1:03.37.

Senior Madesyn Ronquillio notched her 10th backstroke victory of the season with a win in the 100 backstroke (55.55), while sophomore Gabby Donahue finished third with a 55.99.

After winning the 200 IM on Friday, junior Berkeley Livingston continued her success swimming in the individual medleys with a big victory in the 400 IM (4:19.89). Sophomore Sarah Barton finished as runner-up (4:24.41), while freshman Madison Lloyd (4:24.70) took third to make it another Big Red sweep.

The Huskers notched two runner-up finishes in relay action on Saturday. Junior Emily Haimes joined Haebig, Stein and Kucera to swim a 3:42.70 in the 400 medley relay to place second. In the last event of the dual, Haebig and Randby teamed with freshman Beatriz Padron and senior Shannon Stott in the 400 freestyle relay (3:25.40).

Senior Sara Troyer added a second-place finish on the boards, scoring a 333.30 on the three-meter.

The Huskers are looking to carry the momentum into the Big Ten Championships. The conference meet will take place from Feb. 16-19 in Madison, Wis.

LINCOLN, Neb. – The Rutgers women’s swimming & diving team wrapped up the dual meet season falling 210-143, however, captured several season bests and saw another Scarlet Knight capture an NCAA B cut and move up in the RU record books.

Those are old records. 39 years! I was at Ball State for a meet and they had pool records from the MAC championships from the late 1970’s. And i know the pool record at Ohio State’s old natatorium (torn down in about 2004) for the 200 fly was still held by Mark Spitz from about 1971. Wonder what the oldest pool (or state) records are around the country?

Swam at the 3 lane 20-yard pool at the University of Chicago in 1980 and Johnny Weissmuller had odd distance records from the 1920s. That was fun.