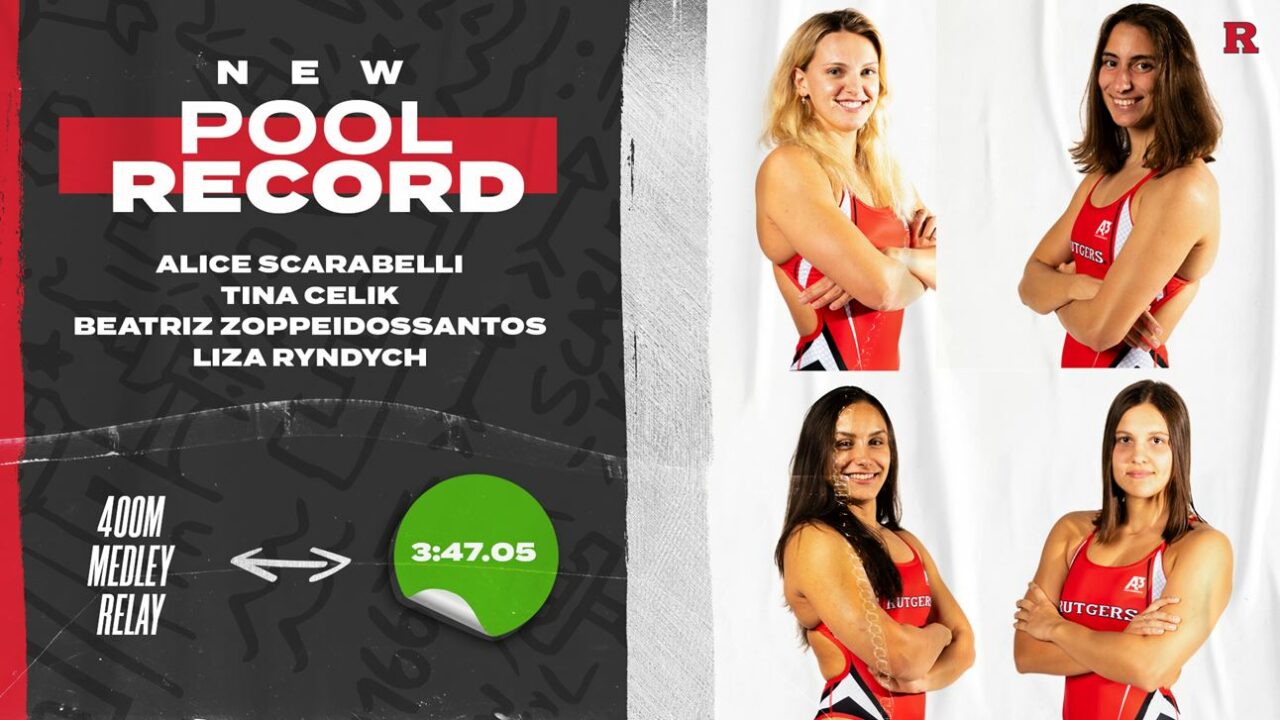 In a battle between the Rutgers Scarlet Knights and the Army-West Point Black Knights, the Rutgers women set a historic, show-topping record. Archive photo via Rutgers Athletics

The Rutgers women’s swimming & diving team are in rebuilding mode in the 2021-2022 season. Last season, the team was hit hard by COVID-19 redshirts, and only wound up taking six athletes to the Big Ten Championships: five swimmers and one diver. The result was a last-place finish, which paused some momentum the program had built in the first two-and-a-half seasons under head coach Jon Maccoll.

But as they rebuild their roster, which includes 21 athletes this year, they’re back on track in a season-opening dual meet against Army-West Point.

The Rutgers women won the meet-opening 400 medley relay in 3:47.05, which broke the Crandall Pool Record of 3:49.99 that was one of the oldest records on the books. That’s a relay that Rutgers didn’t even swim at Big Tens last year.

The record is especially significant because the school’s official record book lists the former records as simply “U.S. Olympic Team.”

In 1976, the Olympic Team swam an exhibition at the Crandall Pool. That meet, which included swimmers like Jill Sterkel, actually predated the Army-West Point women’s team by two years.

But it stands no more after Thursday’s dual meet. The four swimmers who represented the US in the final of the women’s 400 medley relay at the 1976 Olympic Games were Shirley Babashoff, Linda Jezek, Lauri Siering, and Camille Wright, where they took silver, and that same quartet raced at the Crandall pool to set the former record.

Only one record now remains from that exhibition, the 800 free relay which was set in 7:15.64. With most collegiate dual meets excluding the 800 free relay, that record could continue to stand for a long time.

The new record holders are:

The standout legs there are the backstroker Scarabelli, a freshman and the team’s latest addition from a recruiting pipeline out of Italy, and Dos Santos, who last swam at Boise State in the 2019-2020 season before they cut their program. Scarabelli’s time now ranks her 10th in program history and 6th in the NCAA this season.

Two other pool records went down as well, both by incoming diving transfer Abigail Knapton. Rutgers’ long-time diving coach Fred Woodruff retired in the off-season and was replaced by former Nebraska coach Natasha Chikina. Chikina brought Knapton along with her after the two combined for five First-Team All America awards together at Nebraska.

Another transfer, Savana Trueb from Missouri, picked up 2nd on 3-meter, while freshman Holly Prasanto was 2nd on 1-meter as part of a powerful new-look Rutgers diving group.

The Rutgers women touched first in 11 women’s event (though they exhibitioned both teams in the closing 200 free relay).

Rutgers is a great place to be at Great School. Great Pool. Great Coach. 49 minutes from Penn Station. I wouldn’t mind spending four years there.

Wow. That is incredible. Reminds me of the moment it was reported that Brian Goodell’s record at Harvard went down from the board. Just an iconic record & congrats to the Rutgers ladies.

Those were second tier splits for Rutgers and they will not make any splash with such swims at b1g.

It’s meet 1, unsuited, every person on the relay is new(freshman or transfer). I think the rebuild is going just fine.

Pat, it’s the first meet of the season with the swimmers presumably in heavy training. This was also the first time some of them competed in SCY. Their results were similar to the times posted at the Minnesota Iowa meet. I don’t expect Rutgers to win the event at Big 10s, but I think they might surprise some people. The record they broke is an accomplishment regardless of how slow you think the splits were.

Additionally, the relay didn’t include the school record holder in the 100 free who went 51.3 flat start in the individual 100 free at the same meet.

you should compare to relay splits that Michigan and Ohio swam this past weekend. they also are coming out of heavy volume cycle yet hitting 21/low 22 and under 50s