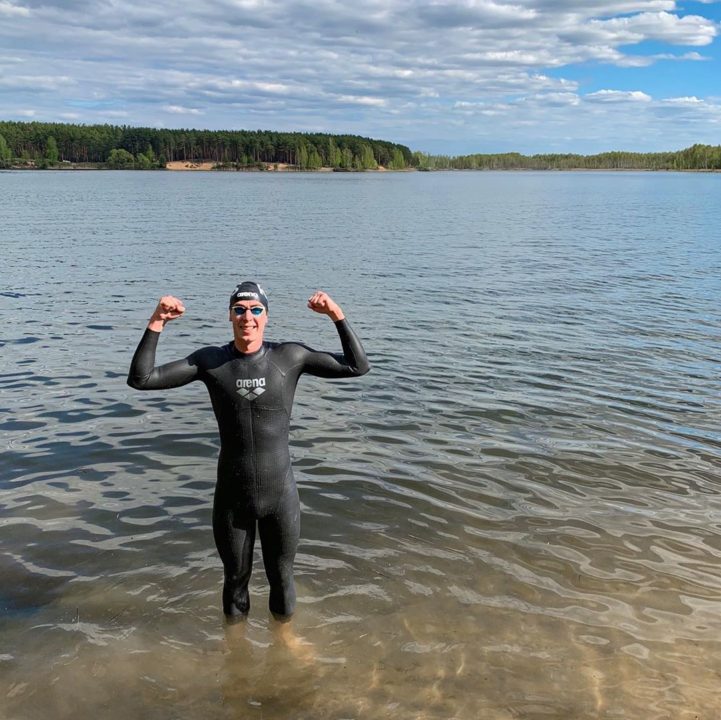 The 30-year-old European open water champion is struggling to find motivation with his inability to race on the international stage.

Russian Kirill Abrosimov, a three-time European champion in open water, is struggling with motivation amid his country’s ban from international competition.

He also competed in the postponed Tokyo 2020 Olympic Games, placing 19th in the men’s 10k.

The pandemic was the first hurdle for athletes around the world, essentially having to sit out of all competition for a year.

Abrosimov and his fellow Russian athletes find themselves in a very similar situation now, with the country’s athletes banned from the majority of international sports due to Russia’s invasion of Ukraine.

For Abrosimov, the lack of racing is beginning to take its toll, especially given that his competitive window is slowly closing.

“For me personally, another season without international starts after 2020 with quarantine is a huge step back and a loss of motivation,” he told MatchTV (via translation), a state-run news agency in Russia.

“I lived in dreams of international medals, which I prepared for and longed to win. At the age of 30, when there is still strength and opportunity to compete in the international arena, you need to cling to every chance and try to achieve your goals so that you don’t regret it later when you finish your career.

“How to force yourself into (racing opportunities) is still a question, but I’m trying to look for options.”

Abrosimov has gotten a few races under his belt when a chance presents itself, including winning the 5k at the Russian Championships earlier this month in the Krasnodar Territory.

FINA has banned all Russian and Belarusian athletes from competing in any of its events through the end of 2022.

life is unfair
Ukrainian children, women and the elderly have a choice of getting bombed or leaving the country. Ukrainian men have a choice of joining the Army or going to jail/facing the consequences.
Russian athletes have a choice too. They can protest the war and face the consequences which could be a fine, jail, loosing their jobs, contracts, far from the grave choices Ukrainians have.
And needless to say, the more people to protest the war, the sooner it would end. Because Putin will never end the war, until he has every Ukrainian town under Russian occupation unless his people’s support changes

>I’m trying to look for options
This reads to me like he’s trying to decide which country to emigrate to.

7
-9
Reply
NOT the frontman of Metallica

It is indeed sad for you and a setback to your sports career with the desicion taken by FINA.
I am sorry to read that this is affecting your motivation.

Meanwhile many Ukrainian swimmers now lack facilities to train in due to them being bombed to sh*t.
Imagine that setback on sports careers and lives in general.

War is truly an ugly thing and this war was started by your government so cry to them instead.

Are we supposed to shed a tear on his lack of international competition? Does he realize that his problems pale in the face of what millions of Ukrainians are going through?

Most international sport organizations have decided that war atrocities and friendly sport meets are incompatible, and rightly so in my view.

Rather than complaining about how the rest of the world treat him, he and his fellow citizens should assume responsibility for the actions of their government.

Finally if I may say, Swimswam’s closing paragraph far understates the ravages and casualties brought by this war, imo.

Do you assume responsibility for your government’s actions?

Alright. I don’t but I like that you do. A bit naive IMO but OK.

I keep hearing “but this isn’t the athletes’ fault,” and I get that. I have empathy for their personal situations.

Whether the war is their fault or not, athletes are used as propaganda in wars. That’s not hypothetical – Putin did it. The swimmers did not cause the war, but they are as much a weapon of the regime as are the tanks and missiles and airplanes. They are being banned not because they are at fault, but because they are weapons of war. They… Read more »

It’s not even on the list of tragedies. One person is like I can’t swim the 200 breast anymore internationally, another says my family is dead. Similar but not the same. Until we start shooting swimmers out of tanks or dropping them on buildings I’m not going to blame the swimmers.

Pretending like propaganda is not a part of war because paper leaflets aren’t metal bullets dramatically misunderstands how every war in human history has been fought.

It is not about ideals or naïveté, it is about a developed country where people are well to highly educated that holds elections (imperfect as they may be). Except perhaps in the deep countryside, people can find out what is really going, if they want to. If they are unhappy about their situation it is up to them to do something about, not to the rest of the world to accommodate their wishes in the face of unspeakable horror, imo.

Well we are all on the same team here sort of, the team that pays attention to swimming obsessively on the internet. We will both just have to agree that you’re wrong. Settled. Victory.