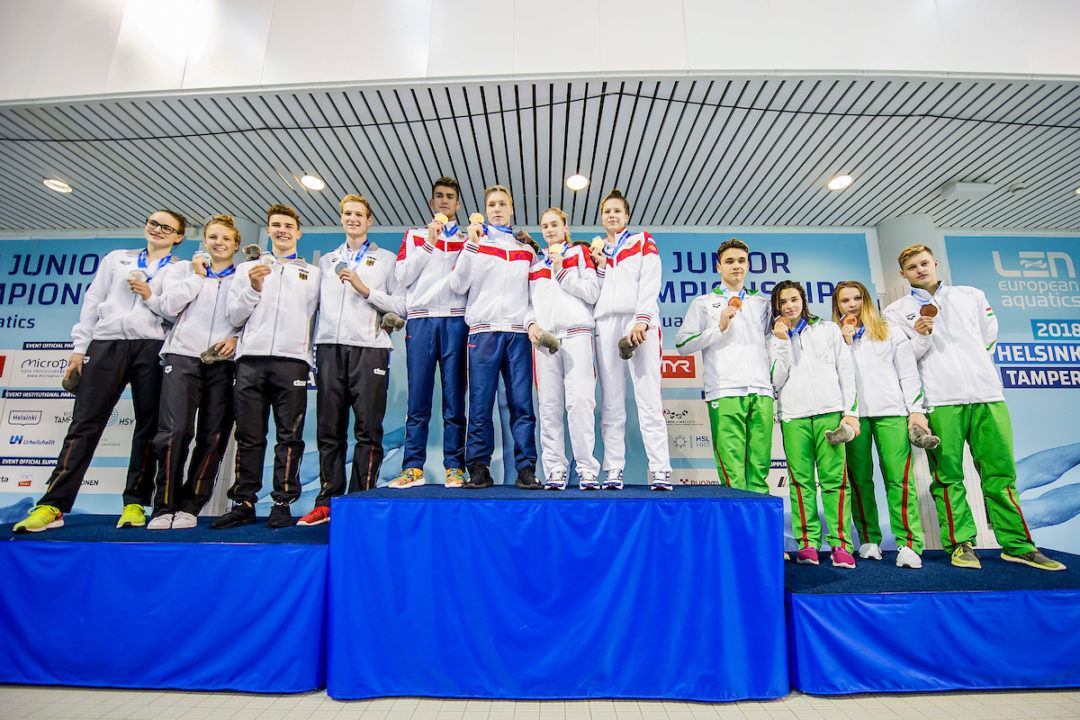 After 2 days of the 2018 European Junior Swimming Championships in Helsinki, Finland, Russia has vaulted out to an early lead in the medals table with 10 total, including 7 golds already.

This is a familiar spot for the Russians, who have topped the medals table in every year since 2011, when Great Britain scored 19 on 6 golds and Russia finished in 5th: still with a high raw total of 14 medals, but with only 2 of them being event titles/gold medals.

For the 2nd-straight year, though, they’re being pushed by a young contingent of Hungarian swimmers. From 2013-2015, Russia was absolutely dominant at this meet, taking 22, 19, and 23 gold medals, respectively, out of 42 on offer each year. Beginning in 2016, however, they began to come back to the field – that year, Russia won 11, while Italy had 9 (and matched their total count of 22); last year, Russia’s 30 medals were well ahead of their competitors, but their 11 golds were exactly-equaled by Hungary.

This year, Russia hangs on to a slim lead over Hungary, with both countries having 10 total medals.

So far, Russia has 1 more gold than Hungary, with that being owed to a mixed 400 free relay gold on Thursday.

The team trophy breakdown shows that while Russia’s boys are far-and-away the class of the meet on that side of the pool (Italy and Hungary are neck-and-neck behind them), the Russian and Hungarian women are about equal. For Hungary, that’s largely by the efforts of 16-year old Ajna Kesely, the revelation of the meet so far, who won the 400 IM (4:41.55), 800 free (8:30.43), and 400 free (4:05.89). Blanca Berecz added a win in the women’s 200 fly (2:10.06) as the next generation of Hungarian swimmers excel in similar events to the great Hungarian women of the past – specifically, in races 200 meters and longer.

Below, see both the medals table ranked by gold-silver-bronze, and the points scoring for the team trophy (which awards points for top 8 finishers in each event).