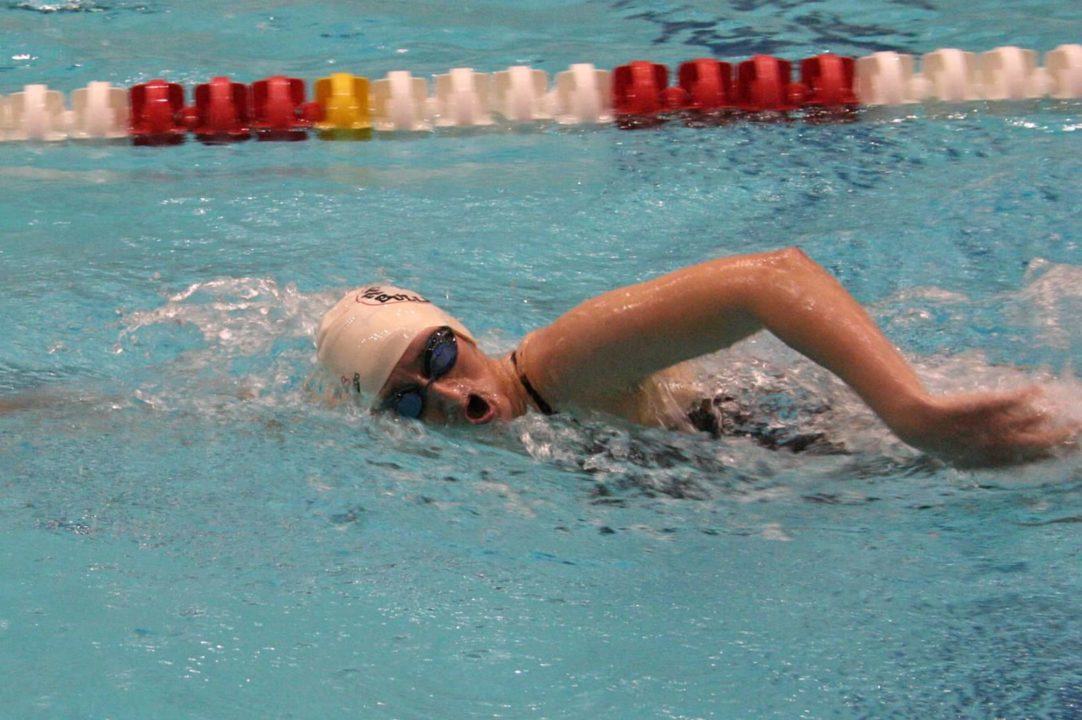 Lindsay Grogan (above) has been added to the U.S. Paralympic Swim Team roster for the Rio Paralympics and Haley Barenbaum dropped from the team as a result of an error in the original selection process. Archive photo via Teresa Allen

Lindsay Grogan has been added to the U.S. Paralympic Swim Team roster for the Rio Paralympics and Haley Beranbaum dropped from the team as a result of an error in the original selection process.

The U.S. Paralympics Association sent an email this week to athletes and staff for the Paralympic team announcing an amendment to the roster and explaining the selection error.

“Unfortunately, the selection committee that convened in Charlotte made a mathematical calculation error within the women’s rankings,” the e-mail said.

The email said that U.S. Paralympics sport staff reviewed its selection process after being notified of a potential error on July 4. Looking back into the process confirmed that there was an error in the selection, according to the email.

“While this situation is unfortunate and difficult for the athletes impacted, U.S. Paralympics has an obligation to follow its selection procedures,” the message said. “Thus, we are taking immediate action to rectify the mistake and nominate the correct athletes, as per the selection rankings, to the Rio team.”

The change to the roster adds Grogan to the roster. She competes in the S9 class and was 3rd in two events at the 2012 Paralympic Trials, taking bronze in both the 100 breast and 200 IM to just miss the team.. She won the 200 IM in the SM9 class at the Paralympic Trials last weekend, which now puts her on the road to Rio.

She replaces Beranbaum, who becomes the first alternate for the team. Beranbaum competes in the S5 class and won the 200 IM and 50 back at the Paralympic Trials.

You can find the original roster announcement here.

When you give them a fraction of a reasonable budget and eliminate the people who are actually passionate about the athletes (i.e., Brian Loeffler), you get the ugly step child of the USOC we call US Paralympic Swimming. This is a tragedy that devastates 2 families and makes the other athletes feel vulnerable. Disgusting, unforgivable, incompetence. Keep on keepin on, but no one in the USA will ever care about Paralympic Swimming when the people responsible don’t care about the athletes. Seriously?!

Welp, looks like yet another attempt from Julie O’Neill and Queenie Nichols to pull a fast one on a deserving athlete. What makes no sense is that not one person on the selection committee saw an error in such an objective system. Even with the article that the USOC posted about the team it is clear that they favor athletes on the resident team in Colorado Springs, Colorado. They devoted a whole paragraph to them as if they were the center of the universe completly ignoring groups such as those who train in Baltimore. I really feel for both athletes who have worked hard and don’t deserve this heartache. Yet another sign that US para-swimming needs to clean house and… Read more »

Excuse me but several athletes from Baltimore are going to rio

It’s not just the Resident Team that is favored, but all Baltimore and Resident team athletes have a lot higher chance of making the team than someone who trains on the west coast and the southwest. The selection committee has their favorite athletes and doesn’t like to give chances to those athletes that have promising futures.

0
0
Reply
No skin in game, but disappointed by US commitee

Team USA’s selection committee waits until Rio 2016, to make a mistake with selection? They couldn’t make a similar mistake at Worlds or Pan Pacs, instead? With the selection procedures posted publicly, I can assume that it is pretty straight forward for most intelligent people, and that this was simply an error that had been overlooked–NOT something that a team of 4-6 or however many are in a “committee” could overlook at the same time. Team USA, this is unacceptable. Telling someone their dreams have come true, just to take it away a few days later…it is disgusting that this kind of error could happen at this level. For the young woman who departed from the announcement at Trials broken-hearted… Read more »