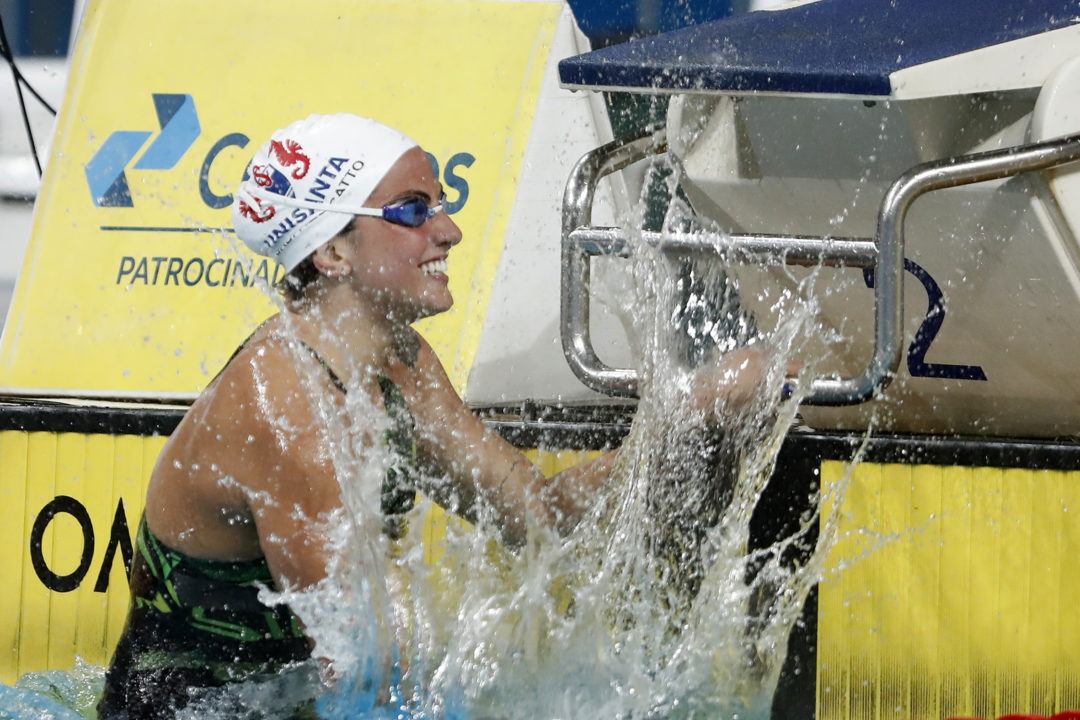 Brazil's Gabrielle Roncatto took gold in the women's 200m IM as well as the 800m free to kick off her 2022 South American Games campaign. Archive photo via Satiro Sodre/SS Press

Through day one of the 2022 South American Games, dominant nation Brazil leads the overall swimming medal table with a total of 18 total pieces of hardware. That’s triple the amount runners-up Argentina owns at this point, while Aruba rounds out the top 3 performing nations with 6 medals early in the competition.

For Brazil, Guilherme Costa kicked things off by topping the podium in the men’s 800m freestyle. The nation’s flag bearer at these Games clocked a time of 7:51.56, comfortably holding off Venezuela’s Alfonso Mestre who touched in 7:54.30 while Colombia’s Juan Morales notched a new national record of 7:54.44 en route to bronze.

Caio Pumputis led a 1-2 Brazilian punch in the men’s 200m IM, producing a winning effort of 2:01.08 while teammate Leonardo Coelho Santos snagged silver in 2:01.83. Colombian veteran racer Omar Pinzon also landed on the podium in 3rd place with a mark of 2:02.21.

Pinzon had earlier raced the 50m back where he also claimed bronze, hitting a time of 26.02. Taking that 50m back title was Brazil’s Guilherme Basseto who touched in 25.06 as Paraguayan swimmer Charles Hockin logged 25.6o for silver.

On the women’s front, Michigan commit Stephanie Balduccini produced the fastest time in the 100m free, reaching the wall in 54.99 for gold.

Her teammate Giovanna Diamante was good enough for silver in 55.40 while Argentina’s Lucia Gauna rounded out the top 3 in 56.88.

Balduccini has been as fast as 54.10 in this event, a time he put up at this year’s World Championships. That rendered the teen as the 2nd fastest Brazilian woman in history.

The women’s 200m IM also saw a Brazilian atop the podium, as Gabrielle Roncatto got it done for gold in 2:13.92 while her countrywoman Nathalia Almeida was right there for second place in 2:14.06. That gave her the clear edge over runner-up Florencia Perotti of Argentina who gave her nation bronze in 2:15.45.