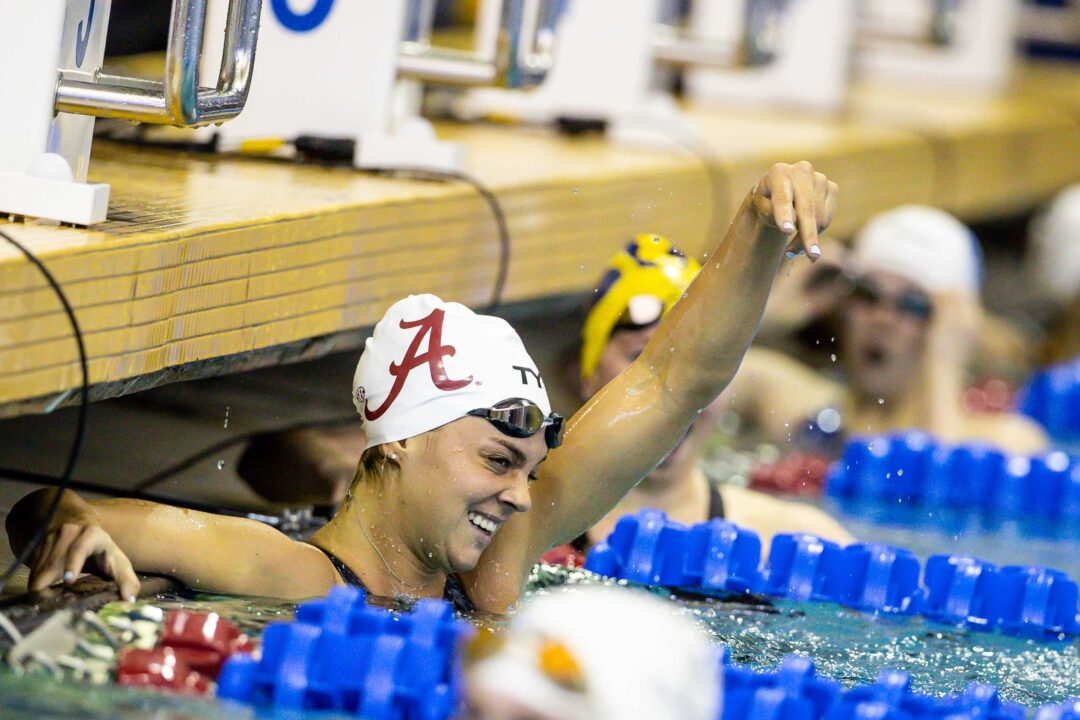 On the final day of the Art Adamson Invite, Alabama's Rhyan White earned wins in both the 200 backstroke and 200 butterfly.

Texas A&M freshman Baylor Nelson has been on fire at this meet. He’s swum two lifetime bests in the IMs–1:43.32 in the 200 IM and 3:38.39 in the 400 IM, both of which are among the top times in the NCAA. His 400 IM was particularly impressive, as he took over three seconds off his previous best to become one of the fastest freshmen in history. On the final day of racing, he posted another lifetime best, this time in the 200 backstroke.

He hit 1:41.17, shaving .14 seconds off his previous lifetime best, which he’d set in March 2022. He finished second in race behind junior teammate Ethan Gogulski. Nelson’s time stands up as currently the third fastest in the country, behind only Gogulski (1:39.98) and Carson Foster (1:40.79).

The 200 back/200 fly double is an absolutely brutal one, but Rhyan White pulled it off extremely well on the final day of the Art Adamson Invitational. She started off by winning the 200 back in 1:51.53, lowering her own NCAA-leading time and winning by over three seconds. Of course, as this meet started a day ahead of the other invites, the other 200 backstrokers will try to beat that tomorrow. This time last year, White was faster, cracking 1:49.73 at the Tennessee Invitational.

After winning the first event of the session, White was back in the water for the final individual event: the 200 fly. She earned the win there as well, posting a 1:54.36. That’s a new lifetime best for her, beating the 1:55.26 she swam at a dual meet in November 2020. This is only the fourth time she’s swum the 200 fly since posting that personal best, and it’s interesting to see her take on an off-event for her at a mid-season invite.

Though his sprinting ace counterpart Maggie MacNeil didn’t race today, Brooks Curry was still getting the job done in the 100 free for the LSU Tigers. He ripped a 41.86 to win the event by almost a full second ahead of the runner up, Alabama’s Kaique Alves. The defending NCAA champion in the event, Curry holds a lifetime best of 40.84.

This is a strong swim for Curry–at this meet last year, his fastest 100 free was a 42.10 leading off the 400 free relay. There have been a slew of 41 second freestyle splits on the 400 medley relays so don’t expect him to be alone for much longer but currently, Curry is the only swimmer to have broken 42 seconds this season. That swim vaults Curry up the national rankings; coming into the meet, his season best time was 43.25 from LSU’s dual with South Carolina.

I don’t understand why a big time invite like this one wouldn’t have a live results page.