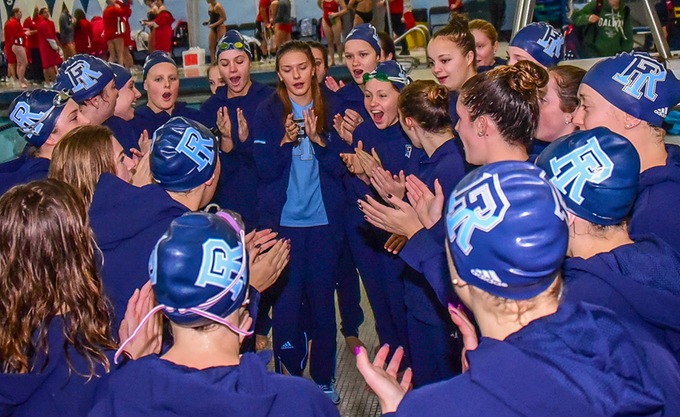 Rhode Island won all but one event in which it had participants as the Rams dominated a non-team scoring meet against Fairfield and Coast Guard Friday night. Current photo via Mike Scott

How It Happened
Rhode Island won all but one event in which it had participants as the Rams dominated a non-team scoring meet against Fairfield and Coast Guard Friday night.

The Rams won 14 of the 15 events in which it had competitors. Seniors Caitlin Guccione and Katy Evans and freshmen Aimee Garcia and Julia Renna all won two events for the Rams. Also winning events for the Rams were seniors Sabrina Anderson and Mackenna Dunn, junior Brooke Kelley and sophomore Grace Kennedy.

Standouts in the Pool

What’s Next
Rhode Island’s divers travel to Ithaca, N.Y. Saturday, Jan. 25 for the two-day Dick Comanzo Diving Invitational. The entire team is back in action for its regular-season finale at Central Connecticut on Sunday, Feb. 2.

KINGSTON, R.I. – Fairfield men’s and women’s swimming and diving took part in the URI Invitational on Friday which included the University of Rhode Island and the United States Coast Guard Academy. The Stags had a strong showing winning multiple events including a new school record by Erik Hren.

“Strong showing in a variety of events tonight” said Head Coach Anthony Bruno. “We are ready to get some rest and head into championship season”

Fairfield will return to action on February 1 as they host Manhattan at the RecPlex Pool at 1 PM.

SOUTH KINGSTOWN, R.I. – Josie McGuire picked up the Bears only win in a non-scoring meet against Division I programs Fairfield and host University of Rhode Island.

The Bears are back in action on Saturday when they host Clark at noon for Senior Day.