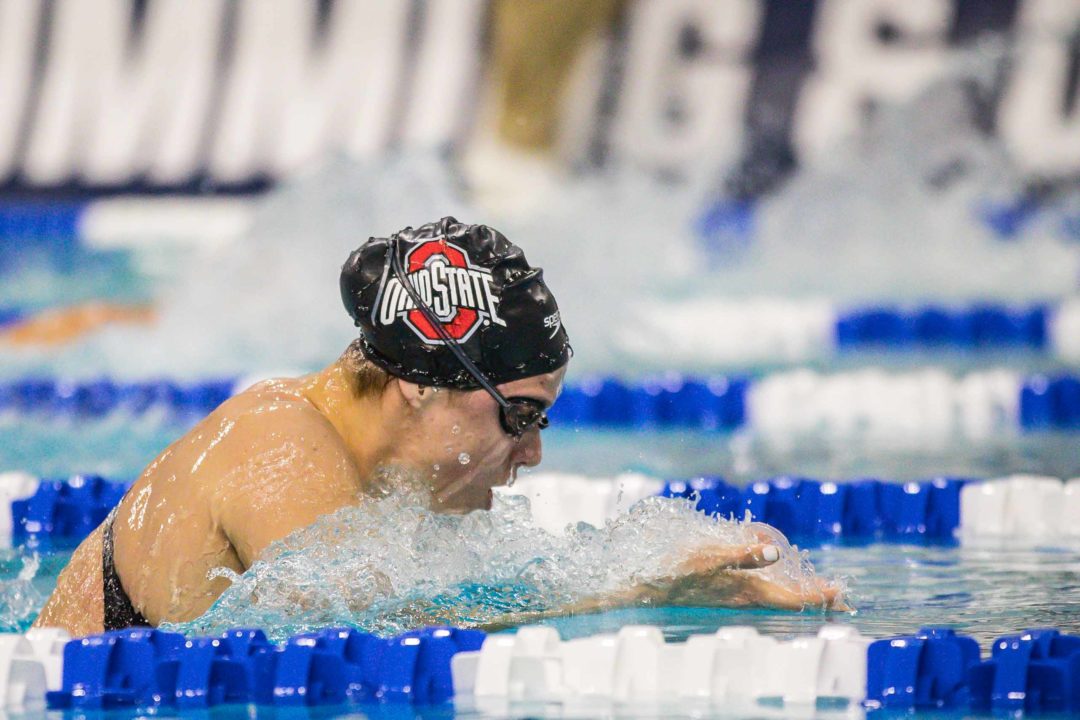 The Ohio State women capped an incredible season with their first Big Ten title since 1986, and the program’s sixth overall. It wasn’t close, as the Buckeyes crushed national powers Michigan and Indiana by almost 200 and more than 500 points, respectively.

Ohio State was just plain good across the board, with a conference-high 27 individual scorers. The Buckeyes were great in distance, with 3 A finalists in the 500 free, including conference champ Kathrin Demler, and conference mile champ Molly Kowal. But they also had the sprint chops to win the 200 free relay, getting a 21.6 leg from Freya Rayner and a 21.7 from freshman Amy Fulmer.

Indiana saw standout freshman Cora Dupre win the 200 free in a breakout meet. Northwestern surged all the way to 4th as a team behind a massive effort from 400 IM/200 breast champ Calypso Sheridan, and Wisconsin’s reigning NCAA swimmer of the meet Beata Nelson went 3-for-3 in her senior year with wins in the 200 IM, 100 back and 200 back, plus a key leg of the 800 free relay.

Further back, Northwestern returns 84% of its individual points and most of its relay legs, but does lose one key component: head coach Jeremy Kipp, who took the head coaching job at USC this offseason.

In our recruiting class ranks, we had Wisconsin much higher than any other Big Ten program at 7th nationally. They’ve got an immediate Beata Nelson replacement in 50.7/1:50.7 backstroker Phoebe Bacon, and added another 52-second backstroker for depth in Kaylyn Schoof. Though Nelson is a huge loss, Wisconsin graduates just three individual scorers and should be in solid shape to refill seven departed relay legs.

We rated the recruiting classes from Michigan, Ohio State, and Northwestern in very much the same tier.

Ohio State’s class is a little sprintier. Kit Kat Zenick is a 22.3/48.8 sprinter and 52.5 flyer who should help Ohio State transition into even more of a sprint powerhouse as its distance swimmers graduate. British import Emily Crane (25.7/55.2 long course) is probably a comparable freestyler to Zenick, and OSU could have a shot at multiple relay titles next year.

Northwestern also has a star international sprinter: 25.4/55.3 Turkish freestyler Selen Ozbilen. They also pulled 16:12 miler Lola Mull – but there’s also an outside chance a star or two doesn’t stick around through the coaching change, whether they follow Kipp to USC or return to their home club in the new Olympic year.

Indiana and Rutgers also made our rough top 25 recruiting classes nationally. IU gets 1:45.6/49.2 freestyler Ella Ristic, who should be a further boon to a team that had a lot of young relays last year. Rutgers adds Alabama transfer Cathryn Salladin (a star miler whose lifetime-bests would have scored 35 Big Ten points last year). Rutgers should also get Federica Greco back from an Olympic redshirt – she scored 38 points in 2019 and was an A finalist in the 100 fly. That’s a great sign for a program that returns 18 of 20 relay legs and 94% of its individual points.

A few other recruiting classes stood out to us. Minnesota has a huge class, led by 4:10.5/2:01.5 IMer Megan van Berkom. The Gophers have a couple good divers coming in – and they’re getting at least one elite one back from redshirt. Sarah Bacon was the NCAA 1-meter champ and scored 60 points at Big Tens in 2019. She’s confirmed to be returning to the active roster this year. Kristen Hayden was a 73-point Big Ten scorer in 2019, and could be returning, too, though there’s no word yet as to whether she’ll take another Olympic gap year.

While we think Wisconsin’s incoming class is going to be one of the best rookie groups in NCAA scoring, the deep Big Ten scoring format still favors big classes from Ohio State and Michigan. One of the tricky pieces in projecting this meet is how much each team focused on Big Tens last year – and how much they’ll focus on them this year in relation to NCAAs and potential Olympic qualifying meets shortly after.

Michigan was in line for a top-5 finish nationally last year, and it felt like they were really saving their best stuff for NCAAs, while Ohio State made Big Tens a major priority. If anything, we’d expect that disparity to be similar next year, too, as Ohio State’s depth really comes through well in the Big Ten scoring format, and less so at NCAAs. With comparable recruiting classes, we’ve got to pick Ohio State to defend its title.

Indiana’s not far behind Michigan in returning points and has a pronounced advantage in returning relay legs. But if Michigan can fill Tucker’s medley relay breaststroke legs with one of their freshmen, they should still be in excellent shape.

There are some question marks around Northwestern amid a coaching change, but their margin of almost 200 more returning points over Wisconsin is too hard to argue against at this point, especially with good recruiting classes for both programs.

Purdue actually outscored Minnesota individually last year, 386 to 381, but the Gopher relays carried the day in overall points. Minnesota returns only 12 of 20 relay legs, but we like their incoming class enough to have them 6th, especially assuming they get one or both star diver(s) back from redshirt.

Penn State only graduated two individual scorers and two relay legs. Rutgers is a ways back of Nebraska and Iowa in pure returning points, but Salladin and Greco should add upwards of 70 points together, and Rutgers already had 18 relay legs returning. We’ll take them narrowly over Iowa and Nebraska for now.

It will be interesting to see how the new facilities at Wisconsin (and Yuri) will impact recruiting over the next few years. I would guess not many programs will invest in pool facilities in the current climate.

I recon that the big ten becomes a 4 horse race with Wisconsin but it might take more than a couple years for them to become a force to be reckoned with.

27 individual scorers? Does the B1G not have a roster limit for conference meet?

Do Big12 Men!!! I’m dying to hear who you think has the upper hand in that meet next year!

But seriously, these are fun. You’re work is appreciated and enjoyed by so many people. Thanks!

Thanks! We appreciate the compliments. Hopefully, we won’t have too many arguments over the Big 12 projections. 🙂