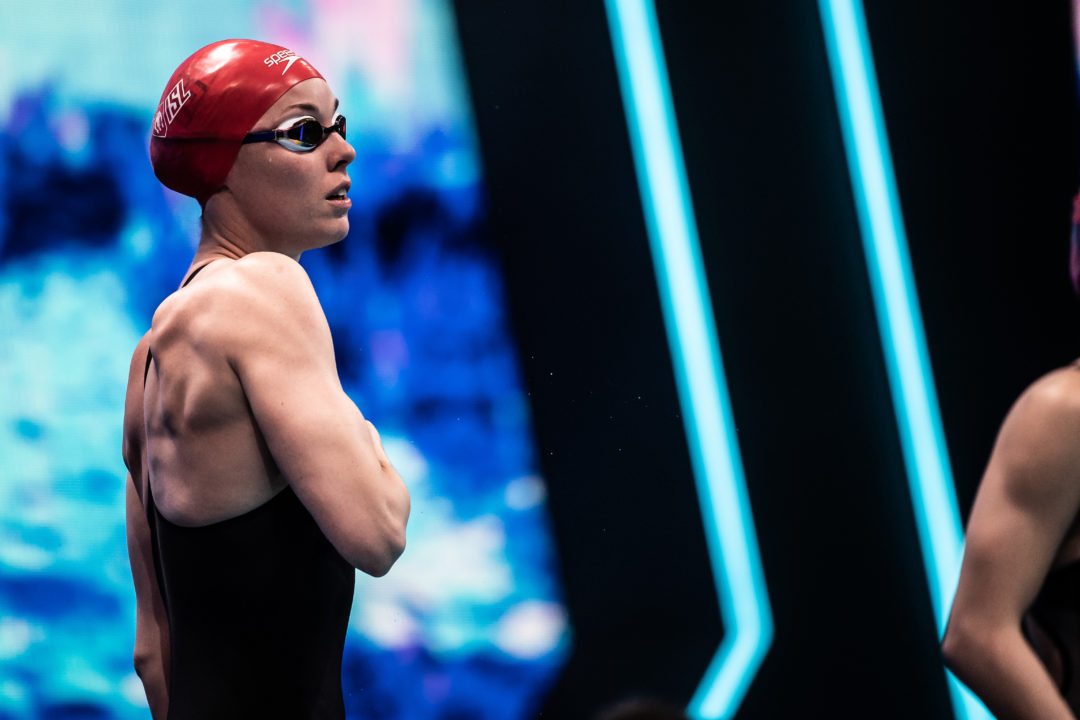 Energy Standard won the lone relay on day two of the ISL’s sixth match from Budapest, with their female duo of Siobhan Haughey and Femke Heemskerk carrying them to a decisive victory in the mixed 400 free relay.

Below, we’ll take a deeper look into the race’s splits.

Alessandro Miressi was off of his winning time from the individual event at the beginning of the session (46.27), but his 46.70 still gave the Aqua Centurions more than a half-second buffer on the field.

Brent Hayden swam an identical time to what he did leading off Toronto’s ‘B’ relay in Match 3, putting him two-tenths ahead of Yuri Kisil on the ‘A’ relay. Kisil was significantly quicker, 46.82, last match in this race.

Evgeny Rylov was about on par for Energy Standard in 47.24, a tenth slower than he went last match leading off the men’s ‘B’ relay.

Marcelo Chierighini continued to prove his ability to step up on relays for the Centurions, splitting under 46 seconds for the third time this season to launch the club to a 1.5-second lead at the halfway mark. Along with the 45.86 he did here, the Brazilian has also been 45.83 in Match 3 and 45.67 on day one of this meet.

The second-fastest split went to Pedro Spajari on the Centurions’ second team, clocking in at 46.44 as the club sat first and second after the men were done. Simonas Bilis was a tad quicker than he was on the men’s free relay yesterday (46.99) for Energy Standard in 46.85.

Blake Pieroni was a bit off for Toronto in 47.00, though still faster than he was on this relay last match (47.22). Pieroni has a 46.05 split under his belt this season (and a 46.15 flat start), but with this relay coming shortly after the 200 free, he’s unable to uncork his fastest swims.

Sergey Fesikov proves to be another reliable (and versatile) option for the Titans, splitting 47.07 in what was his first 100 free swim of the season.

Pieter Timmers has split sub-47 on four occasions this season, and had a pair of 47.0s yesterday, but was only 47.57 for the Breakers. Slower than expected swims from their female legs left their ‘A’ squad back in sixth.

It was the Siobhan Haughey show all match, and she delivered big time once again for Energy Standard as her 51.18 moved them up from third to first. Haughey had a busy day, including winning the 100 free and setting a new Asian Record in the 200 free, but still put down the field’s top split by a wide margin. She had led off the women’s free relay on day one in 51.14, which was also a new Asian Record.

Femke Heemskerk, swimming her first match of the 2020 season after contracting COVID-19, produced her second sub-52 leg of the meet, anchoring Energy Standard to an easy win in 51.72. She was slightly quicker than yesterday’s medley relay (51.79).

It’s become a bit of a trend all season — the women seem to deliver faster swims (more sub-52s to be specific) on the medley relay and mixed free relay than they do on the women’s free relay. Haughey’s lead-off was the only swim under 52 seconds on day one’s women’s free relay, but the medley saw two swims in the 51s and then there were three more here.

Heemskerk was also significantly slower on the free relay (52.84) than she was on the other two.

Joining the ENS swimmers in the 51s was Michelle Coleman, who split 51.83 swimming third for Toronto to bring them within striking distance of the Centurions. Coleman was 52.16 on the free relay and 52.15 on the medley on day one, and had a season-best 51.61 split in Match 3.

Claire Fisch finished things off for the Titans in 52.55, slightly faster than her 52.62 from day one, as Toronto edged the Centurions by .03 for second.

The Centurion women just could not hold the lead the men gave them. Larissa Oliveira (53.33) needed to be closer to what she did on day one’s free relay (53.04) if they were going to hold on to second.

Pernille Blume (52.15) and Rebecca Smith (52.42) also had solid legs, both delivering their fastest of the season.

Had Timmers, Ustinova and Wasick all equalled their fastest split from this match, they would’ve placed second.