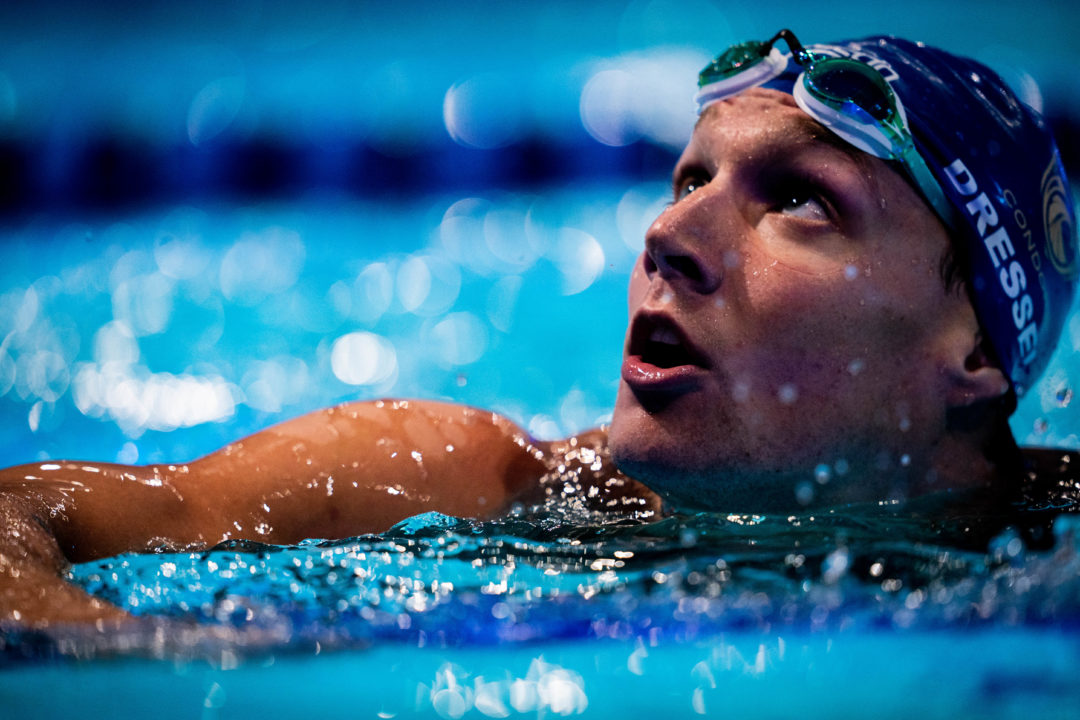 Caeleb Dressel had the fastest split in the field, 45.72, as the Cali Condors won the mixed 400 free relay in a time of 3:16.14. Current photo via Mine Kasapoglu

The Cali Condors executed to a tee in winning the mixed 400 freestyle relay during Match 10, with solid splits from all four legs leading them to victory by over a second. Their final time of 3:16.14 was also quicker than Energy Standard’s winning time from earlier in the day.

Justin Ress got Cali off to a good start in 46.22, lowering the personal best he set earlier in the session in the individual event (46.25).

Kristian Gkolomeev had a similar swim for the LA Current, leading off in 46.87 after setting a new Greek Record in the individual race at 46.73.

Italian Alessandro Miressi was about a half-second slower than he was individually for the Centurions in 46.74.

Caeleb Dressel had the fastest split in the field at 45.72 (after a career-best 45.28 yesterday), putting the Condors 1.5 seconds clear of the Current at the 200 mark.

Marcelo Chierighini has been a relay horse for the Centurions this season, and in his final race of the campaign, he came through with another sub-46 swim in 45.95.

The LA Current bumped Marco Ferreira down to the ‘B’ relay in favor of Tom Shields, which proved beneficial as Shields was almost a quarter of a second faster in 46.53.

Four women threw down 51s in this relay, headlined by Abbey Weitzeil who followed up her American Record of 51.26 at the beginning of the session in 51.19 for the Current.

Up front, Olivia Smoliga and Erika Brown both split 52-lows as the Condors cruised in for the win. Yesterday, Smoliga hit a flat-start PB of 51.95 and Brown had her fastest-ever relay leg in 51.49.

This race might’ve been a different story if LA’s Beryl Gastaldello wasn’t swimming her fourth race in a little over an hour. Gastaldello won the 100 free at the beginning of the session in a French Record of 51.16, but was only 52.63 here, having also won the 100 IM (French Record) and 50 fly before the relay.

Dressel’s RT of 0.58 was by far the slowest of the entire field of 24 swimmers who did a rolling start. He’s never gotten the massive relay bump that some swimmers get, and 0.58 relay exchange definitely doesn’t help! Lets make sure he’s always swimming leadoff in Tokyo

To be fair reaction time doesn’t paint a complete picture. In flat starts dressel also doesn’t have a great reaction time, but it’s what he does during that time that’s great. I think something similar is happening here.