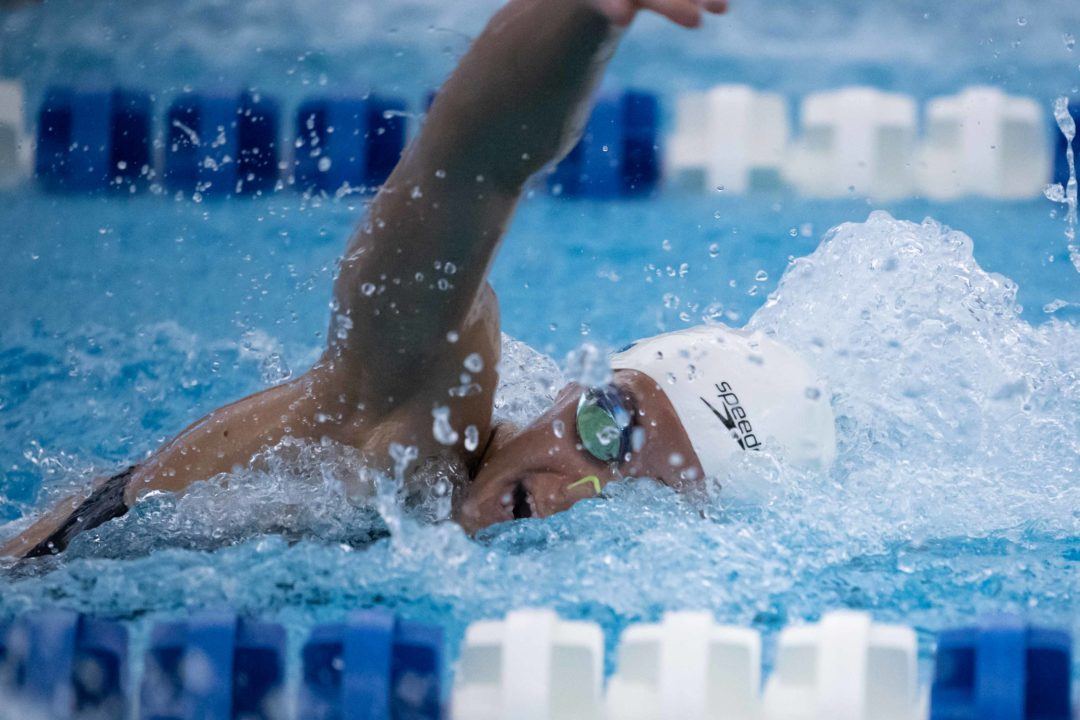 Tiltmann also won the 100 fly and went for a 100 free split in the 200 free, touching at 50.03 just off of her lifetime best. Archive photo via Mike Lewis/Ola Vista Photography

Over ten of Wisconsin’s top club teams are converging in Brown Deer this weekend for the Ozaukee Aquatics IMX/IMR Challenge meet, with Elmbrook Swim Club’s Reilly Tiltmann highlighting the first day of competition.

Friday afternoon, Tiltmann won the 100 back in a time of 52.28, lopping six-tenths off of her old best of 52.88 from her Wisconsin high school Division I title-earning performance this past November. That swim came after the 200 free, where the University of Virginia ’25 commit went for a 100 free split and turned in a 50.03 off of a 23.90/26.13 splitting.

Tiltmann rounded out the day with a win in the 100 fly, going 54.20; she was six-tenths short of her best there.

On the boys’ side, 17-year-old Ziyad Saleem clocked a lifetime best 48.27 to win the 100 back. Saleem, who trains with Schroeder, took four-tenths off of his old best. He’s a ’25 verbal commit to the University of Iowa, though yesterday news broke that the school is cutting the swimming & diving program after 2020-21. 16-year-old Will Hayon of Mid Wisconsin Wave Makers posted a 49.97 for second place, a five-tenths drop.

16-year-old Sam Bork of Mid Wisconsin Wave Makers sliced three-tenths off of his old best in the 100 fly, winning in 48.43. 17-year-old Emilio Perez of Elmbrook Swim Club, an Arizona State ’25 commit, was just behind him at 48.78.

Ziyad is a stud

I sure hope this WIAA ends up running some type of HS championship swim meet this year. I really want to see the relays BEHS puts together this year.

Very impressive. The times these 13 and 14 y/o are throwing down are nuts. 😲