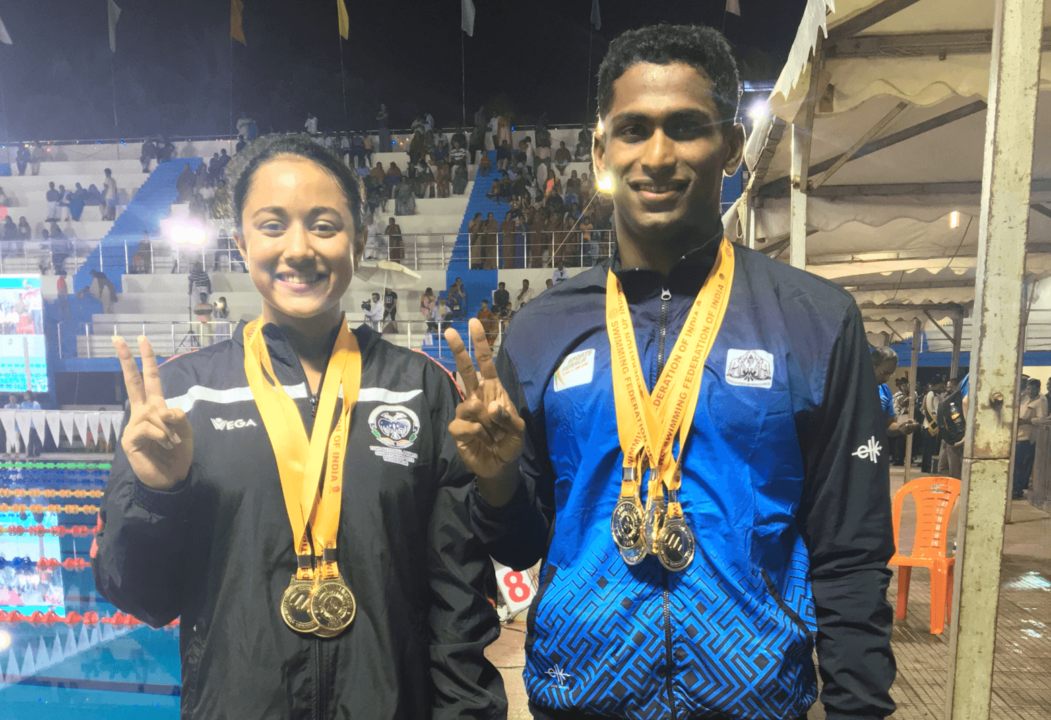 Advait Page the holder of the best Indian record in the 800 m Freestyle and Kushagra Rawat who trains at the SAI GAF centre in Delhi were neck to neck in till the 650 m mark and clearly leading the pack. Advait Page representing Madhya Pradesh used his trademark acceleration in the last part of the race to win gold with a time of 08:12.51 breaking a 8 year national record. Kushagra Rawat from Delhi claimed his third medal of the meet winning silver with a time of 08:16.51 while Aryan Makhija of SFI won bronze with a time of 08:22.30.

Olympian Shivani Kataria of Haryana signed off the nationals in style as she showed her experience and timed her final sprint to a nicety  to beat Karnataka’s Khushi Dinesh. Shivani won gold with a time of 04:30.78 while Khushi clocked 04:34.10 and Tamil Nadu’s Bhavika Dugar paced her race fantastically to win bronze with a time of 04:37.68 beating contenders Astha Chaudhary and Prachi Tokas.

Sajan Kumar ensured the local crowd had a lot to cheer as he got into the pool for the last time in the Glenmark Senior National Aquatic Championships in his favourite event the 200 m butterfly. He set the pool ablaze as he led from start to finish where his only competition was the clock. He stopped the clock at 01:57.73 which was better than the 01:57.75 he set at the Asian Games a few days ago. This was the best time by an Indian in the 200 m Butterfly as he smashed the national record as well. Sajan reigned supreme in his home turf winning gold in all his 5 events setting a national record in each one of them. Supriya Mondal from Railways warded off a late challenge from teammate Sanu Debnath to win silver with a time of 02:03.36 while Sanu won bronze with a time of 02:04.13

Richa Mishra probably has created a record which would stand the test of time. Like Sajan she too won all her events and created one national record. Doing this at the age of 36 is a tribute to her talent, hunger, perseverance and drive. Although Richa did not win the best swimmer’s award, she won her last medal of the meet in the 200 m Butterfly where she warded off an brilliant rear guard action from SFI’s Trisha Kharkhanis. Richa clocked 02:21.92 while Trisha had a time of 02:22.48. Shrishti Nag of Chattisgarh caused an upset to win bronze with a time of 02:24.85. It would be interesting to see if any swimmer could repeat Richa’s feat at her age. She is the epitome of enduring excellence.

The Golden boy of Indian swimming Srihari Nataraj of Karnataka continued his dominance in the backstroke events as he aced the race to win gold in a time of 00:56.53 setting a new national record in the process. Madhu P S swimming on the outside lane 8 for SSCB  led at the halfway stage finished second with a time of 00:58.29 and could not compete with Srihari’s power in the home stretch. T Sethu Manickavel of Tamil Nadu won bronze with a time of 00:58.60

Maana Patel was resurrected as the queen of Indian backstroke swimming as she returned unvanquished and probably unchallenged in this meet. Maana completely destroyed the opposition to win the 100 m backstroke with a new national record time of 01:04.33 breaking her own 4 year old record. Suvana C Bhaskar and Nina Venkatesh of Karnataka swum extremely confidently to bag silver and bronze with time of 01:06.53 and 01:07.05 respectively.

Sajan Kumar was awarded the best male swimmer of the meet. He claimed 5 golds with 5 new national records of which 2 were the best Indian performances. Saloni Dalal finished as the best swimmer in the women’s category as she won 3 Gold medals and set 2 best Indian performances along with 2 National Records. Team Karnataka won the best overall swimming team with a total of 227 points. Karnataka also won the swimming team championships both in the men’s and women’s category with 86 and 119 points respectively. Team Railways and team SFI finished second in the Men’s and Women’s team championships.

Team Services were the champion in the Men’s diving with 36 points with Railways finishing second with 20 points. In the Women’s section Railways won the championships with 30 points while team SFI were runners up with 11 points.

In the Water Polo competitions The top three positions in the Men’s category went to Railways, Services and Bengal while Hosts Kerala, Bengal and SFI claimed the honours in the Women’s category