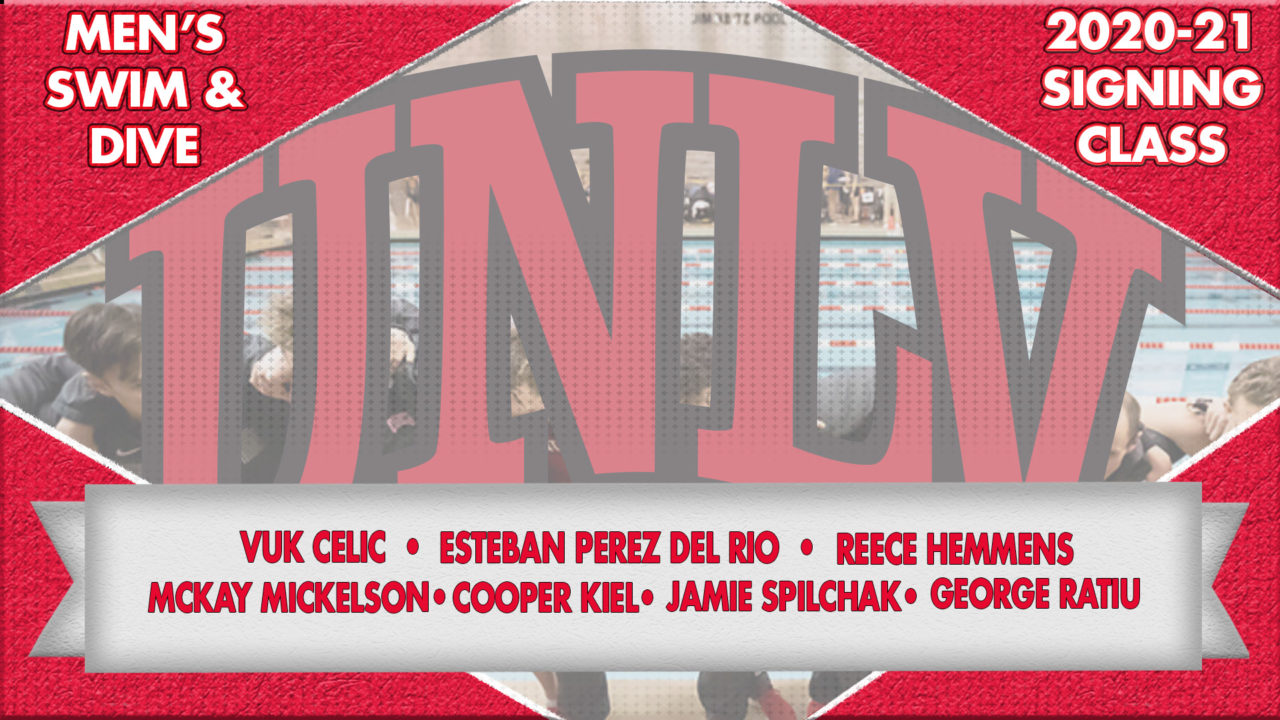 “We spread this class out a bit, with a small freshman crew and a few impactful transfers,” said Loorz. “Building a recruiting class is a team effort, and I owe it to my staff, as well as the student-athletes for their impact, helping bring standout men to our program. Introducing the newcomers to our fans and families every season is always an exciting time for us and we’re hoping for the chance to get back to competing again.”

Headlining the Rebels class is Vuk Celic (Novi Sad, Serbia/Svetozar Milotec). He brings a strong international pedigree to Las Vegas as the Serbian national record holder in the 800 and 1500 freestyle events.  Having already punched his ticket to the 2020 Tokyo Games, Celic is a world-class athlete who’s converted 1500m free time would have placed him fourth in the NCAA mile last year. With his 7:53 in the 800m freestyle, Celic was ranked among the top 25 in the European Union during 2019.

California Community College transfers Reece Hemmens (Newport Beach, Calif./Orange County College) and Esteban Perez Del Rio (Tracy, Calif./Las Positas College) look to add to a class heavy with freestylers, albeit on the other end of the spectrum. Both are expected to be sprint relay players for the Rebels over the next two years. Hemmens follows in the footsteps of his older brother, Hayden Hemmens, who just graduated from UNLV after a standout career. With impactful times from the 50 to the 200, including a 23.43 in the 50m free last summer, Hemmens will provide a strong boost to the sprints.

On the diving side, UNLV welcomes one of Canada’s top young divers in Jamie Spilchak (Saskatoon, Saskatchewan/E.D.Feehan Catholic HS). With his 3-meter, six-score (334), 1-meter (280.72) and platform (330.01) scores, Spilchak looks capable of becoming a big impact player in the WAC diving ranks.

Adding a piece of local talent, McKay Mickelson (North Las Vegas, Nev./Legacy HS) comes through UNLV’s door after a decorated high school career with multiple state championships (100 back & 200 relay). With a 2:05.98 in the 200m backstroke, Mickelson bolsters UNLV’s depth in its strongest event at the WAC Championships last year, where the Rebels finished 1-2-3. He is joined by another freestyle addition in Cooper Kiel (Phoenix, Ariz./Chaparral HS), who was enjoying a big 2020 season before the shutdown.  Kiel’s 1650y free time will make an immediate impact for the Rebels.

Rounding out the class is mid-year addition George Ratiu from Romania. Ratiu is among the elite up-and-coming freestyle swimmers in Eastern Europe, as evidenced by his 22.68 50m free and 50.78 100m freestyle times.  He’ll make his way to Las Vegas after competing in Romanian Nationals this fall, bringing with him the potential to step in as an immediate relay threat for UNLV.

Why do college teams continue to ignore and overlook male Americans in favor of foreigners? Especially right now, with men’s teams getting cut left and right, there are LOTS of talented and hardworking American kids that are looking to attend and swim for American colleges. With the number of D1 men’s programs in perpetual decline, there is a plethora of talent they could choose from.

UNLV’s choices seem especially odd, since in the past couple of years it seems like most of their good male swimmers transfer out for greener pastures anyway. How does this build a good team culture that will be successful in the long term?

Team’s typically get cut because Universities think that they are not good enough or worth keeping financially. As far as I know most team’s want to be fast and sign the best recruits they can meaning the coaches thought that foreigner was better than the available options in the US. So in my opinion signing an elite foreigner helps make your team farther from being cut while continuing to take the slower option does the opposite. And obviously no team signs any swimmer with the thought in mind of yeah they will probably just leave in two years. I read this article and see a team that is potentially taking a big step forward on the national level and I’m… Read more »