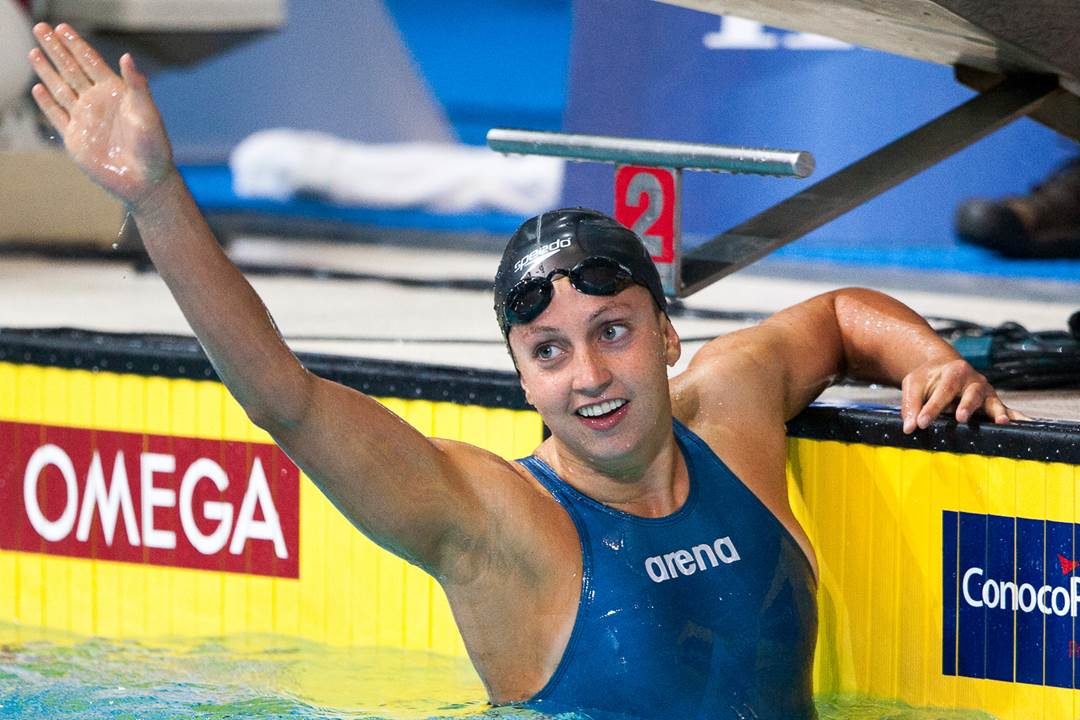 American breaststroking superstar Rebecca Soni has announced her retirement from swimming, ending a limbo that she’s been in having not competed since winning gold at the 2012 Summer Olympics.

The 26-year old Soni, who is a native of New Jersey but now calls California home, has three Olympic gold medals, and three silvers, to her credit. The golds include back-to-back wins of the 200 breaststroke at the 2008 and 2012 Olympics. In that 2012 race, she broke the World Record, clearing an Annamay Pierce mark that had been done during the rubber-suit era. In the process, Soni’s 2:19.59 in finals opened a flood-gate of sorts, as the 2:20 barrier no longer stands as sturdy as it once did. Two women have gone under Soni’s old World Record since she last competed.

“Achieving my dream of going below two minutes and 20 seconds in the 200m breaststroke really put the storybook ending on my career,” said Soni. “I know I’ve conquered my goals in the pool, and now it’s time to conquer something else.”

The former USC Trojan ended her career on a high note, winning golds in her last two career swims (the 200 breast and the 400 medley relay).

After the Olympics, Soni announced that she would be taking a year off from swimming to explore academic options and to deal with back pain that had been plaguing her. She remained in the USADA drug testing pool, the only official measure of a swimmer’s retirement, throughout, however.

Soni, along with fellow Olympian Ariana Kukors, has now launched a “The Atlas Ventures” company, that they hope will inspire healthy attitudes and encourage exploration in young fans.

“Before I move away from swimming too much, I want to take the time to give back,” said Soni. “The swimming community has become my family and I want to do my best to inspire the next generation and to share some of the things I’ve learned.”

Rebecca is a world class human being! Great person

Soni is USAmerican, full stop. And the best USAmerican breaststroker in history. I’m intrigued to see how “The Atlas Ventures” company that she’s starting with Arianna Kukors plays out.

I meant they are Romanian, but might be of Hungarian ethnicity – that I am not sure.

Her parents are from Hungary but they are Romanian.

I hope she writes a book someday. Would love to hear about behind the scenes strategy or Rome world champs final, the whole tara kirks/hardy thing, comparing those 2 olympics, good-bad-great stuff about USC, moving from new jersey and maybe clearing up the Romanian or Hungarian question posed above (smiley face)

Rebecca did clear up the Hungarian/Romanian thing in an interview in 2010. (see http://www.swimvortex.com/farewell-to-rebecca-soni-off-on-venture-with-ariana-kukors/)

Apparently she is ethnically Hungarian but her parents are from Romania in an area where ethnic Hungarians live (Transylvania region).

Just say that her parents are Romgarian. That will make everyone happy. I think.

Psych dad wins this round.

While I’m sad we won’t see her competing again, it’s good her last memories of competitive international swimming will be a gold medal and world record, not a bad way to go 🙂

Wish her the best of luck with her new venture.

One of the all-time greats! Best of luck to her in the future. It was a pleasure watching her come from a unknown in 2008 to beat Jones, then develop into a dominate swimmer in her own right.

IIRC, she’d deferred some sort of surgery until after London. Could be she decided the magic just wasn’t going to be back after that, and finally filed the papers.