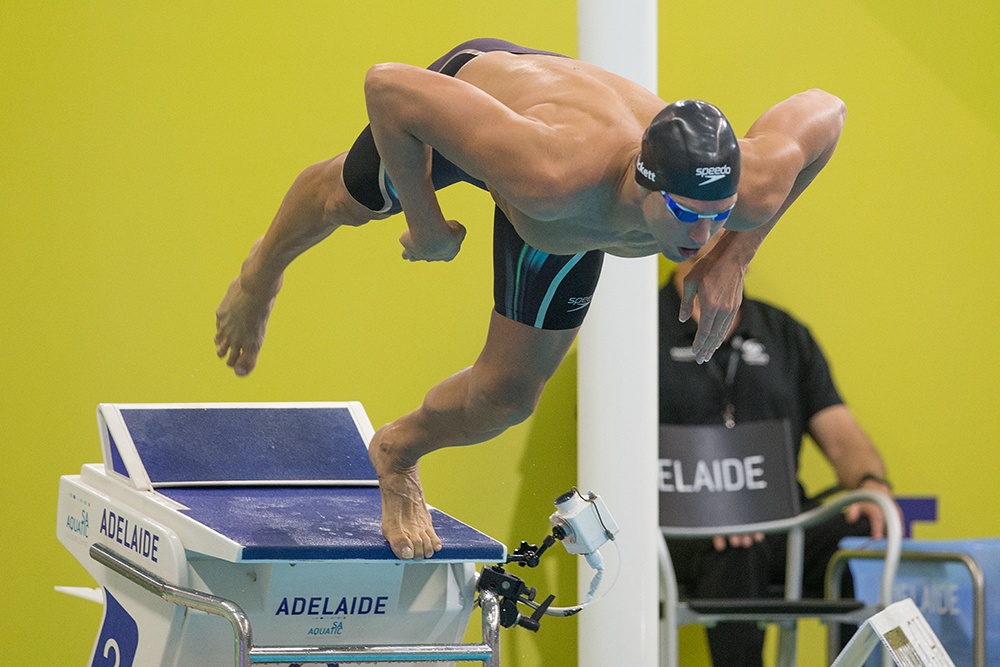 "We will continue to support them throughout this journey to recovery," reads a portion of Swimming Australia's statement concerning troubled retired Olympian Grant Hackett's recent behavior. Archive photo via (Photo by Steve Christo)

Yesterday we reported how troubled retired swimming star Grant Hackett of Australia was arrested at his family’s home on February 15th after an apparent drunken rage. “It’s what I’d call a bit of a breakdown,” is how the 3-time Olympian’s father described Hackett’s behavior of ‘ranting and raving’ at his Southport home before calling the police. “Grant’s got a medical problem and it manifested itself here this morning,” his father, Neville, stated to The Gold Coast Bulletin.

Since the story broke, Hackett posted a graphic Instagram photo displaying a black eye he alleges he received from brother. “My brother comments to the media… but does anyone know he beat the shit out of me. Everyone knows he is an angry man,” was the statement accompanying the photo.

My brother comments to the media… but does anyone know he beat the shit out of me. Everyone knows he is an angry man.

Additionally, Swimming Australia released an official statement on their website yesterday, offering support to Hackett and his family. “Swimming Australia believes that it is important that Grant and his family are given the necessary support in this situation and we will continue to support them throughout this journey to recovery, as we would do for any of our members,” reads a portion of the statement.

This is the 2nd time within the past year that Swimming Australia has had to release a statement regarding Hackett’s behavior. After the ‘nipple tweaking’ incident that occurred immediately after Australia’s Olympic Trials in April of last year, SA said, “Given Grant’s recent experiences, we are concerned for Grant’s welfare and believe that it is very important that we provide Grant with all the support we can provide to ensure his progress as a person remains on track.” As a result, Hackett was dropped as a potential mentor to the Olympic squad in Rio.

The most recent statement regarding Hackett’s behavior can be read below:

Swimming Australia is concerned to hear of the reports surrounding Grant Hackett on Wednesday February 15.

We are not aware of the full circumstances surrounding his situation but we offer our support to him and his family.

Swimming Australia believes that it is important that Grant and his family are given the necessary support in this situation and we will continue to support them throughout this journey to recovery, as we would do for any of our members.

Swimming Australia CEO Mark Anderson said: “We have maintained contact with and support for Grant regularly and he has been engaged with the swimming network since his return to the pool in 2015. Since the 2016 Australian Championships, we have continued this contact. Both John Bertrand and I connected with him on separate occasions late last year following the Rio Olympics.

“Given these recent circumstances, we once again reached out to Grant and his family to continue to offer support and assistance in any way we can.

“Our primary concern is his health and well-being and personal welfare. Grant is a legend of Australian sport and an important part of the Australian swimming family.

“Through the Australian Swimmers Association and educational programs like ‘Beyond the Black Line’, we want to ensure that all of our swimmers throughout the course of their swimming journey are prepared and supported.

“Swimming Australia provides athlete support through its Personal Excellence and Performance Psychology programs into, through, and beyond the High Performance Pathway.

“This is an area of the sport that Swimming Australia takes very seriously”.

The Australian Swimmers Association (ASA) General Manager Daniel Kowalski said: “The health and wellbeing of our swimmers throughout their careers and especially following their exit from the sport is a major priority for us.

“We work closely with Swimming Australia to ensure swimmers are supported not only throughout their professional career but once they leave the sport as well.

“The ASA provides support and information relating to challenges that swimmers may face during their careers as well as information on the transition from swimming career to a life away from the pool.”

Swimming Australia will work hard to ensure we continue to offer the necessary support for all of our swimmers, both past and present.

Nice little PR statement means nothing if not followed up. Saw an article where the ASA (Daniel) were critical of no money for the support programs, if so what is SAL offering? What is the ASA doing to support Grant and others in a similar position?

True but where does this responsibility end ? If we had had that onus for our Dawnie we would have been up for 50 years of ‘support’ . It is only in the last year that Dawn has displayed ‘socially accepted’ norms of opinion . Dawn is just a badass. Grant will have episodes but if he avoids triggers like excessive alcohol , grande pianos , high end casinos & resorts , missing teams , losing medals to a retroactively banned swimmer , he should be ok . Plus who is to say that Aust swimming is the authority on anything? Like all orgs it is a collection of transient people , ideas , issues . Daniel himself admitted that… Read more »

It would be near impossible to help everyone with issues. I know Aussie athletes who are not so high profile who are suffering SAL have not even phoned the athletes to see how they are doing? Financial assistance falls on deaf ears and by the time you get up the courage to talk to someone at SAL you have to explain the issues all over again to new members of the organisation, due to the already stated transient nature of the collection of people. ASCTA does not even offer a ‘Mental Health First Aid (MHFA) course or specify that coaches hold that accredtation despite them having to hold regular first aid and CPR. If SAL want to help the athletes… Read more »

Both good replies. My point was this has been discussed many times and there was a confidential service in place for swimmers/coaches to talk or get some assistance but it seems to have disappeared. Perhaps some groundwork to have it back not just for the high profiles but all, funded properly. Whilst it would have been helpful it may not solve everything but a clear position from ASA might help as well.

Fortunately or unfortunately Grants profile has brought this issue to a head. There are so many athletes out there in the same position that need help and a plan needs to be put in place to protect athletes at all levels of sport. Swimming (SAL) to make some changes…… less talk (reviews) and more positive action to ensue swimmers have a overall positive environment to train and compete in. Examples 1. Restrictions on training hours for age groupers (12/ under 6 sessions per week) (16/under 8 sessions per week) etc 2. Scheduled off season 6 weeks + 3. Foucus and incentives for long term development 17 years and over. 4. Reward of student athletes so they have a life during… Read more »

I feel like Grant got that in the midst of his rampage. I really do hope he gets help so sad to see such an incredible swimmer fall so low, apparently he also went off the grid temporarily