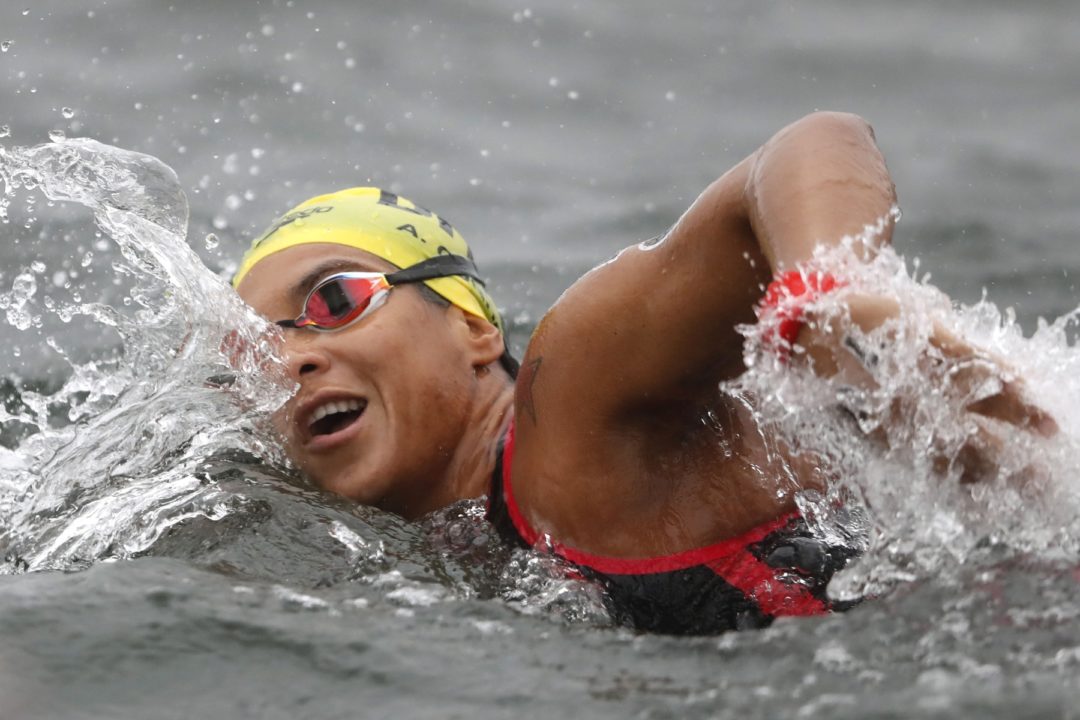 Kristof Rasovszky and Ana Marcela Cunha picked up wins in the 10km event, while Oceane Cassignol earned the official women's title (only for Europeans). Archive photo via Satiro Sodré/rededoesporte.gov.br

The 2022 Swammy for Male Open Water Swimmer of the Year goes to Italy’s Gregorio Paltrinieri, the gold medalist in the 10k event at the World Championships.

Hungary’s Olympic silver medallist Kristof Rasovszky kicked off the season with a hard-fought win at the first leg of the LEN Open Water Cup in Eilat. The women’s race saw Olympic champion Brazilian Ana Marcela Cunha touching in first, though the title and the €2,500 prize money – available for European competitors – went to France’s Oceane Cassignol.

The wind and the waves created a perfect open water swimming course in Eilat where the LEN Cup returned to after two years to serve as the continent’s traditional season opener once again.

The men’s race offered a thrilling contest right from the beginning. Hungary’s Kristof Rasovszky rushed in front early on, followed by a group of Italians with reigning European champion Gregorio Paltrinieri in the mix. Only fractions of a second separated the swimmers at the end of each round, Rasovszky tried to increase the pace in the penultimate seventh lap where he gained a 3.8sec advantage. However, the Italians – to whom Frenchman Marc-Antoine Olivier, European runner-up in 2021, joined for the final rush – chased him down and turned the finish into a shoulder-by-shoulder battle. Rasovszky managed to fend off Domenico Acerenza’s final assault and out-touched him by 0.3sec, while Paltrinieri came third with further 1.7sec adrift, and Olivier had to settle for the fourth place.

Though Rasovszky had a lot of podium finishes in the recent past, this was his first 10km win at international meets since August 2019 – but in time to celebrate his 25th birthday (due in three days) in style.

The women’s contest ended in a different way. Special guest star Ana Marcela Cunha was outstanding once more, the Brazilian Olympic champion – she celebrated her 30th birthday on the eve of the event, by the way – managed to swim away with the males who had caught up the women’s field in the second half of the race. Cunha won by a mile (1:21min), though she was not eligible to be officially ranked and awarded in the Cup as that is reserved for European participants.

Quotes from the winners

Kristof Rasovszky (HUN) “I’m really happy to win this race, it was a lot of fun out there in the waves. I love to swim in these conditions, this is real open water swimming. I was swimming with a bunch of Italians in front, they are all pretty good swimmers, so I thought in this choppy weather maybe the best tactics was to set a high pace and it worked. Acerenza was pretty fast at the end, I had to give it all and it’s great that I could touch in first.”

Ana Marcela Cunha (BRA) “At one point the men caught us up so after that I tried to swim with them. When they finished their race, there was only one lap to go for us and by then I was far ahead so the tactics worked well. For me, Eilat is a very special place, I won my first big race here and it’s always a pleasure to return here. It was so nice that I was greeted at the technical meeting because of my 30th birthday – now the 20s are over, it’s a new chapter but I’m still preparing hard, this year we have the World Championships in our focus.”

Oceane Cassignol (FRA) “It was a good race after a three-week training camp on high altitude, this is a good assessment of the level of my preparations. I like to compete here in Israel as I always perform well. Today we have huge waves, high water temperature so it was really difficult, but I managed to handle these challenges. With 2.5km to go, the boys passed us, and I tried to follow them with the maximum speed possible but that was very hard. It was a kind of second race starting from that point with a really high pace – I led up until then, but soon Ana Marcela managed to go with the guys while I could arrive in the second place. Since it’s a European event, I was declared first.”