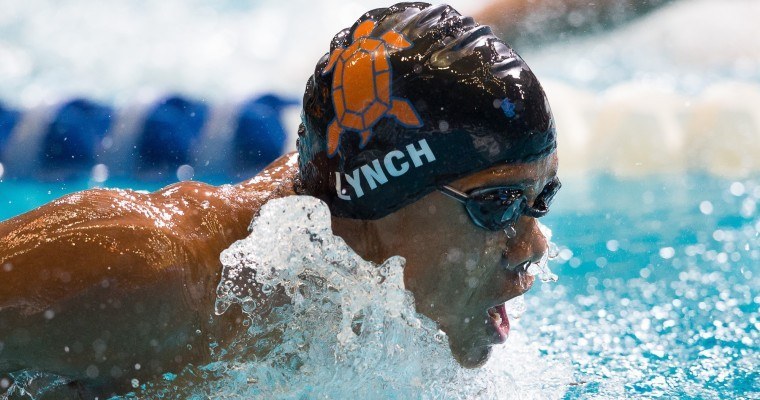 Justin Lynch, who is faster in the 100 meter fly at 16 than Michael Phelps was, leads the #1-ranked class in the country in 2014. Archive photo via Tim Binning/TheSwimPictures.com

The College Swimming Coaches Association of America (CSCAA) has released their second round of Division I polls, with the Georgia women moving from #4 to #1.

Kelly Pash on Getting Back into the Habit of Racing (Video)

Texas sophomore Kelly Pash dropped 2.4 seconds to crack 2:00 and pop a 1:59.58 for a third-place finish and earned a spot at U.S. Olympic Team Trials

Texas junior Daniel Krueger who sprinted to a 23.25 win in the men’s 50 free at the US Open meet in San Antonio this past weekend

To see more about our methodology for rankings and to read an overview, click here.

The 5-8 classes were all pretty close, and really were all built pretty similarly. One really versatile guy (McHugh, Bentz, Okubo, and Ogren) surrounded by a good sprinter and a few other guys to fit in-between. That’s what made it so hard to rank them: that they’re so similar.

Stanford, though, with a good, deep class got the push up to #5. They especially hit their home-turf very well, getting some good signees from their own backyard at Palo Alto Stanford Aquatics. Stanford and Georgia did the best at recruiting their local areas among the entire class of 2014.

Update: there’s speculation that NCAA Champion  diver Michael Hixon could transfer to Indiana. If so, this is probably the #1 or #2 class in the country, for those counting transfers. Hixon himself says that nothing has been decided yet, however.

With 20 signees, this class is very reminiscent of that monster group put in by Big Ten rivals Michigan a few years ago that carried them to an NCAA title. Although in a class this size, it’s very likely that there will be attrition, there’s enough depth to absorb that.

In the least, this class will make sure that nobody is talking about “Indiana’s lack of sprint depth” for at least four years. There will be plenty of swimmers to develop to take over breaststroke spots when Cody Miller graduates as well. Roughly half of this class is made up of sub-21 second sprint freestylers and sub-58 second breaststrokers, including a 55.5 Sam Apa and a 54.2 from Cody Taylor.

The two biggest stars of the group are Pieroni out of Chesterton in the northwestern part of the state: the same program that produced the Whitaker brothers, and Khalafalla, an Egyptian.

James Connor is a big prize too. The Australian Olympic diver goes all three events and should be an NCAA scorer immediately – continuing the Hoosiers’ success on the boards.

This Indiana team has had a run for a few years where they’ve hovered right around the top 10, but in sort of a fragile way. They had just enough guys to get into that top 10, and just the right pieces, but no extras. With a signing class that has this sort of depth, if even a few of those guys from the second-tier develop, the Hoosiers could start making that climb toward the top 5.

Though it be but small, it is mighty. Texas men have signed just 5 to National Letters of Intent in the class of 2014, but those 5 would stack up against any program’s top 5 in the country.

This is the class as confirmed by Texas’ sports information department, and we can expect probably a handful of walkons to join the group late.

After a 2013 class where the state’s best recruits escaped to foreign pastures, Eddie Reese got back to his recruiting core and took the state’s top two: Jonathan Roberts and Brett Ringgold, who are teammates with the North Texas Nadadores. Ringgold is one of a large group sub-20-second freestylers in the class, and could potentially be an NCAA scorer in any of the four 100 yard events down the road. Reese will be licking his chops at the IM potential there. Roberts leans toward the longer events, and has already been 4:16.90 in the 500 free, 14:57.90 in the 1650 free, and adds an NCAA-qualifying worthy 1:42.37 in the 200 back. That puts him in range of being a three-event nationals scorer as a freshman.

Together, it’s two swimmers who complement each other very well and who go a long way toward making this a complete class, even though it’s on the small side.

That doesn’t even mention the guy who is probably the best swimmer in the bunch: Joe Schooling from Bolles. The Singapore national is the American National High School Record holder in the 100 fly (45.52), is another sub-20 freestyle sprinter (19.89), and goes 1:45.2 in the 200 IM. What’s scary is that none of those are even his best event in long course. That’s the 200 fly, an event that he doesn’t focus on too hard in yards because it’s not on the high school schedule, and still he’s been 1:45.00 (and he’s 1:42-good as a freshman, at least).

Coupled with Conger, the big signing for Texas last season, the Longhorns now have two guys who don’t even need to improve in college to be half of an NCAA-title-contending 400 medley relay. If they just match their high school bests, they’re as good as any pair in the country.

Austin Temple is one of the hidden gems nationwide in this class of 2014. He’s just now starting to become more well-known in national swimming circles, but he’s a 52.8 100 breaststroker. He was just a 57.0 heading into his junior year of high school. Temple is another immediate-impact signee, and one whose career arc is taking him in the right direction (1:01.9 in long course to boot).

Jared Butler, then, becomes icing on the cake. He’s a U.S. Open qualifier in the 200 IM in 1:47.53, and he’ll have some development needed to find 2nd and 3rd events, but he’s just a solid swimmer with good endurance and no glaring weaknesses.

First and foremost, Michigan added the sprint freestyler in Paul Powers that they had when they won the 2013 NCAA title, but lacked last year when they finished 4th. His 19.51 and 43.19 in the 50 and 100 freestyles rank among the fastest of all-time by high school swimmers, and he holds the Georgia State Record in both. His presence will give Mike Bottom lots of relay options, and relay options is what Mike Bottom has mastered like few others.

Other than that, Michigan didn’t have any really big needs for next season, just the need for individual scorers and long-term depth with the graduation of a really good class. Along those lines, they’ve brought in one of the brightest stars in Canadian swimming, and a multiple-event Canadian age group record holder, Evan White. In long course, he’s a 53.5/2:00.8 butterflier and a 1:59 IM’er.

Aaron Whitaker is a very different kind of swimmer than his brother Kyle, but if he shows up as well for the Wolverines as Kyle did, then he’ll be a fixture of the Wolverines’ nucleus for four years. The younger Whitaker, more of a sprinter, goes 47.0 in the 100 back and 46.3 in the 100 fly.

PJ Ransford, a member of the 2014 Youth Olympics team, and Alex Katz, a member of the 2013 Junior Worlds team, will bring reinforcements to a Michigan distance group that has graduated a lot of stars in the last couple of years and not done much recruiting beyond Anders Nielsen.

The Wolverines’ class took a little hit when they lost Scottish IM’er Mark Szaranek on a decommit and recommit to Florida, but still get high marks for a big class that fills the team’s needs. Filling needs is a big part of recruiting and the Wolverines get an A+ there, even though this class probably doesn’t compensate for the points that Michigan is graduating.

Another incredible class for the defending NCAA Champion Cal men. The lineup is littered with National Age Group Record holders, National High School Record holders, and at least a couple of guys destined for the Olympics.

The Cal men have so little to replace, that it’s hard to see them not winning NCAA’s again next season (which would be their 4th title in 5 years) if they can get any contributions at all out of these freshmen. Gornay (43.8/1:34.9 freestyler, 47.0/1:44.5 backstroker, 46.8 flyer) is close to being ready for three-event scoring duties as a freshman. He and Justin Lynch, a 46.42 butterflier and breaker of Michael Phelps’ 15-16 100 meter fly National Record, can fight to replace Tony Cox and Marcin Tarczynski’s butterfly legs on the medleys: the one real returning weakness for Cal.

Cal has their one breaststroker, Chuck Katis, back, but that group will get so much deeper with this class. Matt Whittle is a 55.2/1:57 breaststroker, who didn’t even swim that event at his Sac Joaquin Section championship meet. Why, you ask? Because Connor Hoppe, also in this class, was lurking, and became the fastest breaststroker in public high school history (53.06). Zach Stevens could almost be overlooked, even with a 55.1 in the 100, so deep is this class.

And to top things off, they’ve added diver Finn Scribbick to the class. He’s probably not going to come in and start winning NCAA titles as a freshman like we saw from Michael Hixon at Texas this past season, but Scribbick is a Junior Pan Ams qualifier, and one of the top divers in the class. he might work out a few points at NCAA’s as a freshman, which is something that has been sorely missing from Cal’s lineup for a while.

Is there a time line for the Michael Hixon decision? Would be a huge get for the Hoosiers.

Cal did pretty well recruiting locally too. Lynch and Silverthorn are from the East Bay, Whittle’s from Sacramento (Davis), and Hoppe’s from Merced. That’s four recruits from Northern California. 8 out of 10 recruits from California also helps stretch recruiting $s. Durden’s a Marsh protege so his teams are sprinter-centric, but he still hasn’t fully leveraged Yuri’s distance talent. Bears are solid in middle distance, but the 2015 team lacks a scorer in the mile. Hinshaw and Burns have the talent, but they aren’t on Bagshaw’s level yet. Bagshaw’s mile ignited Cal when they needed it most and went a long way to sealing Cal’s NCAA title in the final session. Any diving points Finn could add would help rectify… Read more »

Take another Californian Aidan Burns next year if you look for a mid-distance and distance star. 4.17/8.51/14.57 last SCY season!