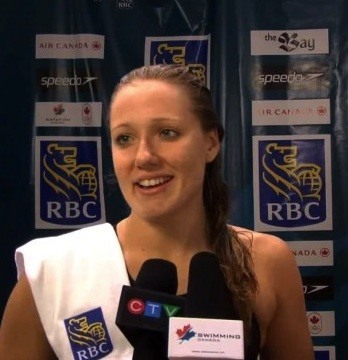 Last year was a fantastic year in the young career of Canadian Olympian Tera Van Belien. Van Belien qualified for...

Last year was a fantastic year in the young career of Canadian Olympian Tera Van Belien. Van Belien qualified for London in both the 100 and 200 breaststroke events.

In the 100 breaststroke Van Belien placed eighth in the semi-finals, but did not advance to the final because she tied Alia Atkinson, who went on to defeated the Canadian in a swim-off.

Van Belien, a Team Aquatic Supplies sponsored athlete, will competing in the 2013 Canadian World Championship Trials throughout the next week in Victoria, British Columbia.

Heading into the trials SwimSwam had a chance to ask Tera a few questions:

What did you learn from your Olympic experience?

I learned so many things!

Since it was my first international competition with all the best swimmers in the world, I learned how to be motivated and determined by their presence, rather than intimidated. I think international exposure and being among the best in the world, is really important for me to learn from others and be more comfortable in high stress situations.

I learned that not everything goes the way that you want it, and that experiences can teach you a lot more than you think they can.

In the past you have had the opportunity to train with a great group of world class breaststrokers, what did you learn from training with swimmers like Annamay Pierse and Martha McCabe?

I learned that they are some of the toughest swimmers I have ever swum with and the only way for me to get to their level was to try to kill myself and push myself as far as I could go.

I also learned that you cannot put a limit on yourself, both in training and competition. They both were just amazing examples of that and proved time and time again that Joe’s crazy practices do pay off!

Describe the relationship you have with your coach Jozsef Nagy?

Last year, I can honestly say that I was pretty scared of him. I not only had to learn to work with a completely different program but also train with some of the best breaststrokers in the country, and both situations were pretty intimidating!

This year has been completely different! It’s a lot more one on one with Joe, and I feel much more comfortable (maybe too comfortable hahah) talking and working with him.

What do you feel are three of the biggest influences he has had on you?

He is very strict and tells you very often that you’re doing something wrong. This has helped me to be a more purposeful swimmer and think more about my technique rather than going through the motions.

He certainly knows how to push my buttons and I can sometimes get really frustrated with my practices and not be in the greatest mood. But he always asks me where my smile is, or tells me stories of his past swimmers that help me feel like I’m not an awful swimmer.

I have swam with so many other coaches and am so thankful for how they have contributed to my swimming career, but I think that Joe has definitely helped me to reach that next level. I am so grateful and thankful for him looking forward to continually getting my butt kicked every day for many more years!

What elements of your race and stroke have you been working on strengthening? How have you gone about it?

I have worked on widening my pull phase and having a more relaxed stroke in general. I feel like I have benefitted a lot from the Japanese stretching that we have implemented into our dryland program. It has helped build the smaller muscles and I have felt a lot of improvements in my breaststroke pull.

What are your goals going into World Championship Trials?

My goal is to not only make the team, but post times that are better than my best times at Olympic Trials last year.