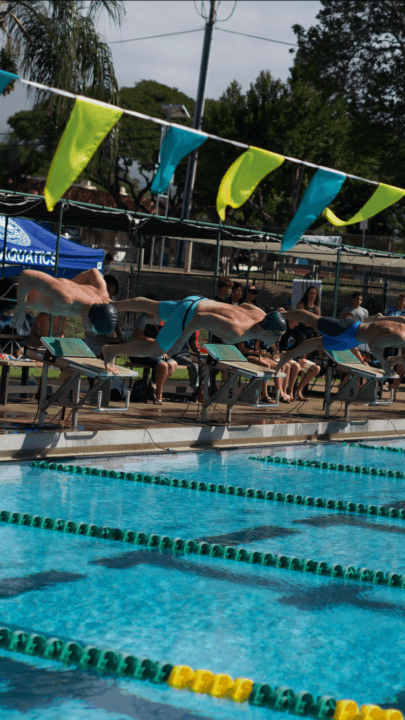 Michael Petrides dropped a 1:35.3 200 free to win the 200 free, while Jaek Horner split a 24.70 as Kamehama smashed the state record in the 200 medley relay. Archive photo via Joe Glenn/Hawaii Swimming

The Punahou School won Hawaii state titles on both the girls’ and boys’ sides this weekend in Honolulu. This marked the boys’ sixth-straight title, while it was a five-peat for the girls.

Besides Punahou, there were several standout individual performances.

Grace Monahan stole the show on the girls’ side, decimating the field in the 200 IM (2:02.42) and 100 fly (53.79). The freshman was the only swimmer on the girls’ side representing University Laboratory School, but helped them to a 7th place finish.

Man, only one heat at finals. Hawaii shows no mercy to consols swimmers.

It used to only be scored top 5 placings a couple years ago too. Not enough population to justify consol heat, but definitely quality on top end.

Oh! Didn’t know it’s still that way. Thanks for the update HISWIMCOACH

Petrides is a great swimmer and great guy, damn shame he had to go and become a bear 🙁

Well, you all there on the Farm have a great bunch of guys, as well…why not share the wealth and give another team a chance? 😉 Best of luck to you all at the Cal/Stanford dual meet, Pac-12s and NCAAs. You all should have a good showing.. Hope Grant S can get back to full strength, as well…good guy, without question.