Programs Across the Country Receive Their Championship Rings 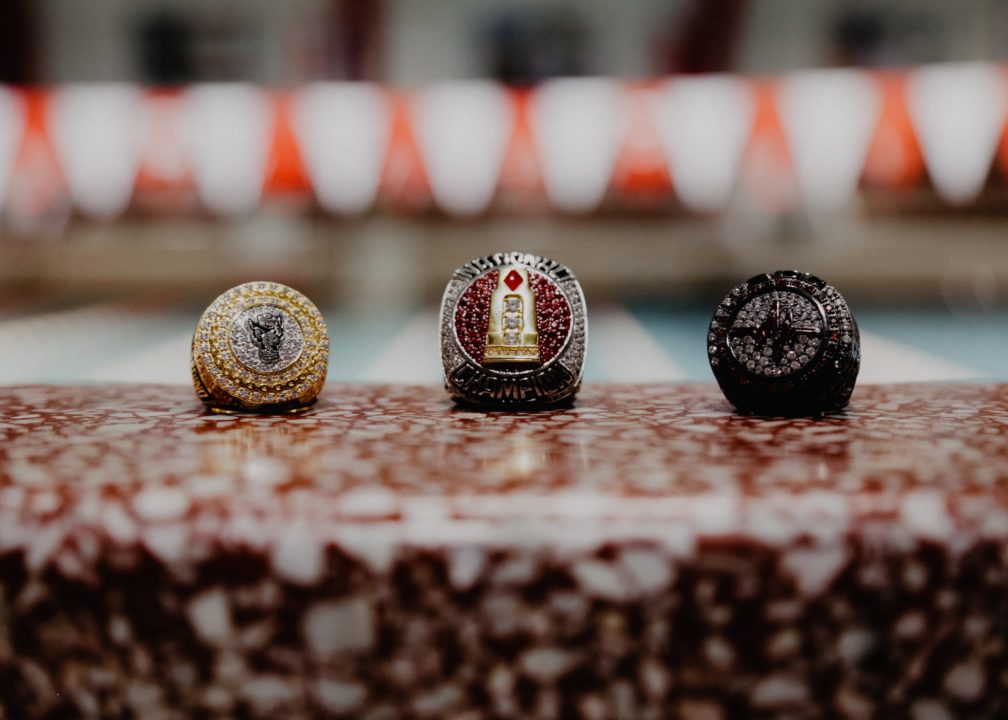 The most elite swimming programs in the country are honored by their universities with their championship rings through special ring ceremonies. Current photo via @PackSwimDive/Twitter

While conference and NCAA Championships were handed out in February and March of this year, most schools wait until the following school year to award their championship rings. Some schools use alumni or intrasquad meets, while other programs use special ceremonies or home football games to honor their athletes. For each team, the ceremony marks a celebration of the achievements from a season earlier.

The Stanford women received their NCAA Division I national championship rings this summer, while the Cal men will receive theirs at the home football game weekend when Cal hosts Oregon State on October 19th.

Below are college programs that we could find ring posting ceremonies for on social media. Have others that we missed? Post them in the comments!

The Pack women received their ACC Championship rings on September 27th during the program’s annual Wolfpack Games. This is their 2nd title for the program in 3 years.

This team is all heart. Up close and personal with our women’s championship rings. pic.twitter.com/aCWD68Hwjc

The Pack men also received their hardware during the annual WolfPack Games on September 27th. This marks five ACC titles in the row for the program.

All we have to say is 🤩. pic.twitter.com/ujJhAoER3Z

The Hoosiers claimed their 3rd consecutive and 27th overall conference crown by winning 13 of 21 events at Big 10’s. They were honored with their rings on September 7th during a home football game at Memorial Stadium.

The Gators won their 7th consecutive SEC title this past February and were honored on September 23rd during the university’s Champions Parade one of their home football games.

The Stanford women’s program brought home their 3rd straight national title this year. The program received their championship rings over the summer during a ceremony of champions.

The Cal Men’s program brought home the national championship this year which marks the programs 6th national title. The Golden Bears were honored on September 28th at California Memorial Stadium during a home football game. The program will receive their rings on October 19th.

The Royals were honored with a ring ceremony on September 20th marking their 10th straight national championship (5 for the men, 5 for the women).

This is what excellence looks like! Celebrating our @Queens_Swimming teams as men and women receive their National Championship Rings tonight. #FiveInARow #Dynasty @QueensUniv @QueensAthletics pic.twitter.com/UohYL71tei

What they stand for is awesome. How they look is… not.

Show then the money!!! Rings are ok and can be pawned BUT cash is KING!!!