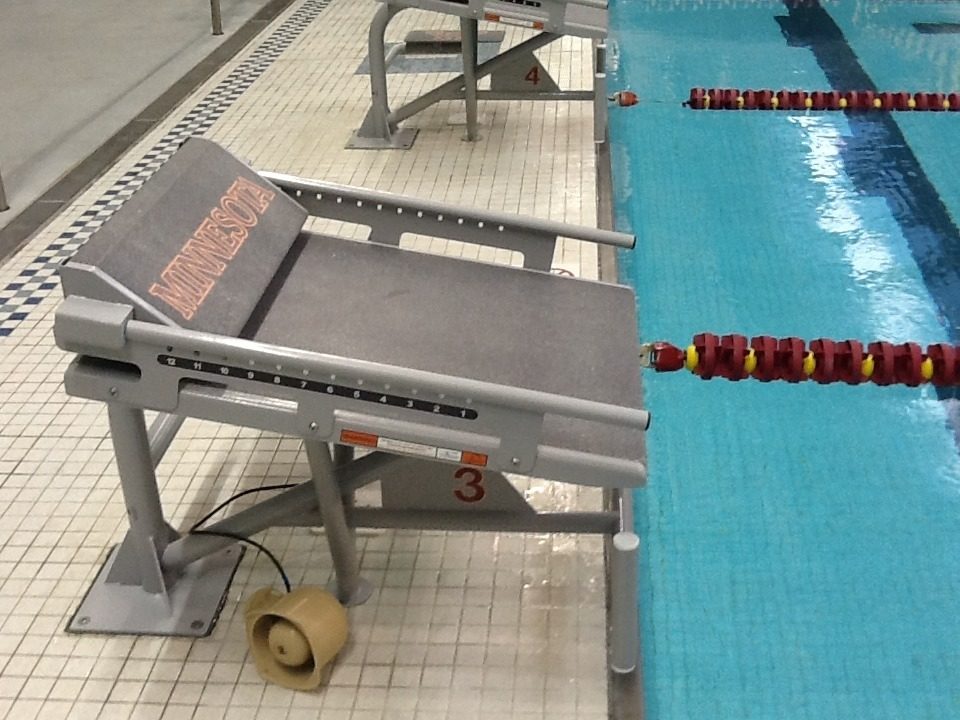 With the NCAA not allowing swimmers to remove the kick-plates from the Spectrum blocks at the University of Minnesota, here are some visuals of what the starting platform will look like for relay swimmers at the women's NCAA Championships later this month. Current photo via Jared Anderson

The NCAA announced last month that it wouldn’t allow the kick-plates to be removed from blocks for relay events at the women’s NCAA Championships in Minneapolis.

For those swimmers preparing for the competition in just a few weeks who want to know how the blocks will work for relay exchanges, or for fans who want a closer look at what the Spectrum-brand blocks are like, SwimSwam has you covered.

We’ve got some photos of the Minnesota starting blocks with the kick-plates (the wedges on top of the blocks) in various positions. Here is how the block looks with the wedge slid all the way back:

The spectrum starting blocks have kick-plate wedges that slide along the handgrips. Photo courtesy of Jared Anderson.

Here they are with the wedge a bit farther forward:

The mechanism to move the wedges around is pretty typical – pull the handle at the back and slide the kick-plate to whatever depth you want. Photo courtesy of Jared Anderson

The NCAA Division I Men’s and Women’s Swimming and Diving Committee decided not to allow the wedges to be removed for relays as was done at the Big Ten Championships last March. Here’s a quick video of the wedge being removed – it slides off the front of the block, and though the action is pretty easy to accomplish, there is a possibility of a kick-plate falling into the pool, which might be one reason their removal isn’t being allowed.

The big guns pulling the wedge off the block belong to Minnesota swimmer Andrew Hartbarger, who graciously volunteered to be our SwimSwam hand model.

Still, the blocks are quite large, so swimmers should still be able to do step-up relay starts without having to step on or over the wedge. Here’s a picture of the blocks with a swimmer’s feet for scale. On the block is Minnesota women’s swimmer Jessica Plant, who told us she hasn’t had a problem relay starting from in front of the wedge so far this season.

And since we’re posting pictures, here’s one more for the backstroke-inclined among us. This shows the backstroke bars, which are essentially H-shaped with grab areas set up both horizontally and vertically.

Silly me…I could have just done this first:

Winding up and swinging your arms around is universally accepted as a best practice for relay starts. But with the legs there are many different approaches – taking 1 or 2 steps, taking no steps, or even hopping or skipping to the front of the block. In this case, simple is effective. Start with your feet in a track position, then step forward with the back foot and jump off with both feet over the edge of the block.

The “track to two feet jump” relay start is the best because:
•You push off with two feet, getting the most force out of… Read more »

I seem to recall a study done by Russell Marks and USA Swimming about the decline of the step up start where swimmers start with both feet at the back of the blocks. The general idea of the article was that more teams were moving to having one foot at the front of the block and only doing the step up with the back foot. Anyone else remember this article? Anyone notice teams doing a single step versus the two steps?

Another reason to dislike the NCAA for this senseless rule.

Ever see one of those wedges shoot off the back of the block, when not properly re-secured. My bet is that this will become a more permanent part of the block and the sport.

Agreed STEVEN NOLAN, what do the urinals look like??

Well, it is women’s NCAAs, so I’m not sure how much the urinals will be utilized… still, I’ll have to remember to include a bathrooms review next time I cover a facility 🙂