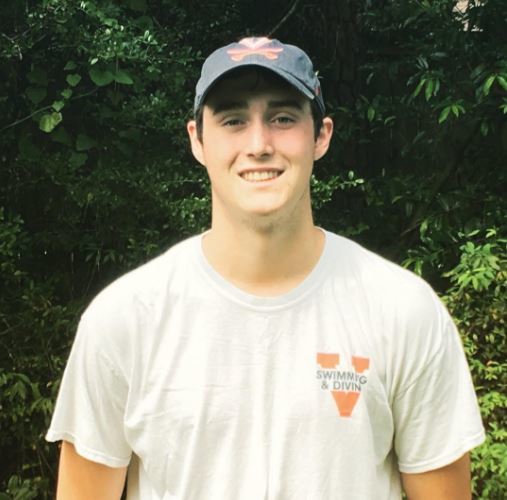 Cooper Wozencraft does not appear on the psych sheets for next week's ACC men's swimming championships, which is a key loss for Virginia.

Teams also have over-entered their roster limits and will have to cut to 18 swimmers and 3 divers by meet time.

Because Virginia has senior Joe Clark to use on the backstroke leg of their medleys, Wozencraft has been swimming the butterfly leg instead. The 200 medley is seeded 4th in the conference and the 400 medley is seeded 2nd; the 200 has not yet secured an NCAA invites, with a season-best time of 1:25.83, needing to hit the provisional time of 1:24.97.

Virginia’s next-best 100 butterfliers this season behind Wozencroft’s 46.33 are freshmen Konnar Klinksiek (47.75) and Josh Fong (47.96). Another freshman, Max Edwards, is a viable replacement as well – he swam the fly leg of Virginia’s top 200 medley relay against NC State and split 21.01, just few hundredths behind Klinskiek on the team’s B relay.

Wozencraft was also a member of the school’s fastest 400 free relay this season. The Virginia men, like the Virginia women, haven’t raced an official 800 free relay this season, but Wozencraft likely would have been a member of that relay as well at the ACC Championships as the team’s top 200 freestyler. On paper, his absence costs the team about 2 seconds.

We have reached out to Virginia for more information on Wozencraft’s absence and to ask if he will return for the NCAA Championships. We have not yet received a response.

Wozencraft isn’t the only big name missing from the psych sheets. Bartosz Piszczorowicz, who ranks 9th in the 100 free and 6th in the 200 free in the ACC this season, is also absent. He swam the entire fall semester for Louisville, but hasn’t represented the Cardinals since November. Social media posts indicate that he’s back training in Poland, which Louisville has confirmed, saying that the Polish federation wanted him back home training for the Olympics. Piszczorowicz is expected to return for the Cardinals next season.

Louisville has a lot of depth in the 100 freestyle, but far less in the 200 freestyle, so Piszczorowicz’s absence hurts them more in the longer 800 free relay.

Where is the psych sheet found?

Links at the top.

5
0
Reply
JP input is too short

11
0
Reply
Sccoach
Reply to  JP input is too short

41
-3
Reply
CACrushers
Reply to  JP input is too short

Did it ever come out what Giller’s injury was last season?

7
0
Reply
Aquaman
Reply to  JP input is too short

And Whiteside and Burras

Whiteside was a back injury as well (sustained during his first year under the old coaches and never that much better). Burras wasn’t a good fit culture wise (academics, respect mostly). All in all, been tough with injuries. We’ll see if the reason for Wonezcraft comes out.

Bartosz Piszczorowicz is literally a big name. Only 4 consecutive/14 total consonant name in the ACC. My new favorite swimmer.

I mean, he’s no Fabian Schwingenschlogl, or even a Hrafnhildur Luthersdottir, but yeah, it’s a pretty good name.

None of these can really be expected to affect the outcome of the meet though, right?

Either way two huge losses for Louisville and Virginia.

That would be naive to say seeing as how the race for 2nd 3rd and 4th was already really close between FSU UVA and Louisville before this news came out……. @ GA BOY

NC State is probably almost definitely going to win. The Wozencraft absence is enough to POSSIBLY impact the battle for 2nd. Though, probably not.

Will definitely impact teams’ standings at NCAAs, though.

Does this mean you think UVA is a lock for 2nd?

Probably almost definitely is quite the crescendo of a hedge.

If it’s an injury, are his mid-season times fast enough for an invite if he’s recovered by then?

Working Swim Mom – Probably not. From a quick glance, I’d say he’s at least a few tenths over what it’ll take to qualify in the 100 back and the 100 fly, and a little over a second over probable qualifying times in the 200 free and the 200 back.

That’s a shame. My son swam in the same High School district as Cooper and Clayton Bobo (now at A&M) They are good kids and I hope whatever is going on he is able to work through soon. I love reading articles about local kids’ successes, in and out of the pool.

None of his season best times individually would have been invited last year, and are probably not close enough to genuinely be ‘on the bubble’ this year, though they’re not too far off of that either.

That’s individually. He would be on Virginia’s relays.

I don’t think anybody is a lock for 2nd.

Unrelated, but is the Women’s Big 10 psych sheet out?

The Big Ten says that they don’t do psych sheets.

Feels like some people are entered in every event, even events they definitely won’t be swimming.

yes, that is that seems to be normal way, enter full slate and then closer to meet scratch those who are not needed